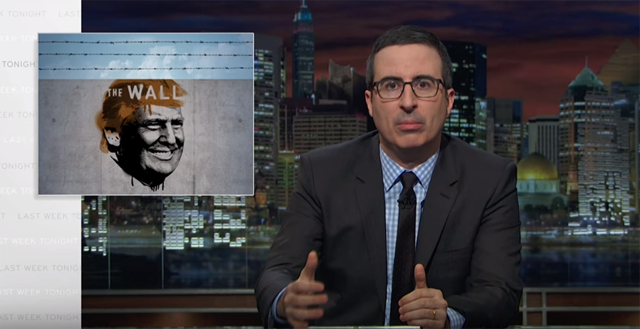 John Oliver addressed Donald Trump (or Donald Drumpf) and his planned wall with Mexico over the weekend on Last Week Tonight.

Zootopia topped the weekend box office for the third weekend in a row. In its third weekend of release the animated Disney film earned an estimated $38 million to push it over the $200 million mark at the domestic box office.

The Divergent Series: Allegiant was the top debut film of the weekend with a $29 million opening weekend. Miracles from Heaven earned an estimated $15 million in its debut.

Season 5 of Veep premieres on HBO on April 24.

The Saint Louis University Billikens take on Ball State tonight at 7 pm at Chaifetz Arena in the second round of the Women’s National Invitation Tournament.

The Billikens advanced to this game by beating Little Rock last week for the program’s first-ever postseason win. Ball State advanced by upsetting Iowa at Iowa in their first round matchup.

Jackie Kemph led the Billikens over Little Rock with 20 points and seven assists. Nathalie Fontaine led the Cardinals over Iowa with 24 points and 11 rebounds.

Tickets for the game tonight can be purchased at the Chaifetz Arena box office.

Fernando Alonso Walks Away From Formula One Crash

Formula 1 driver Fernando Alonso was in a pretty horrific crash over the weekend in the Australian Formula One Grand Prix. Miraculously, Alonso was able to walk away from the crash.

Missouri Tries To Take Down Texas In Austin Tonight

The University of Missouri women’s basketball team has a tall task ahead of it tonight in the second round of the NCAA tournament. Robin Pingeton’s team takes on #2 seed Texas on the Longhorns’ home court at 8:15 pm tonight.

Sophie Cunningham had 20 points in the Tigers’ first round win over BYU. It was the first NCAA victory for the program since 2001.

The Texas-Missouri game tonight can be seen on ESPN2.

Bryan Cranston As Lyndon B. Johnson In New HBO Film

Bryan Cranston will star as Lyndon B. Johnson in All The Way, premiering on HBO on May 21. Cranston played the same role in the stage production that the movie is an adaptation of. He won a Tony award for his performance.

Bryan Cranston as Lyndon B. Johnson in HBO special

On these same pages last week I wrote about how the PlayStation Vue service is changing the streaming game. I was disappointed to read as I was researching the article that Fox Sports Midwest was not currently available on the service in the St. Louis area, despite being advertised as such. A representative of PlayStation support posted over the weekend that Fox Sports Midwest will be coming to the St. Louis area in “the coming weeks”.

Blake Lively stars as a surfer stranded after a shark attack in The Shallows, in theaters June 24, 2016.