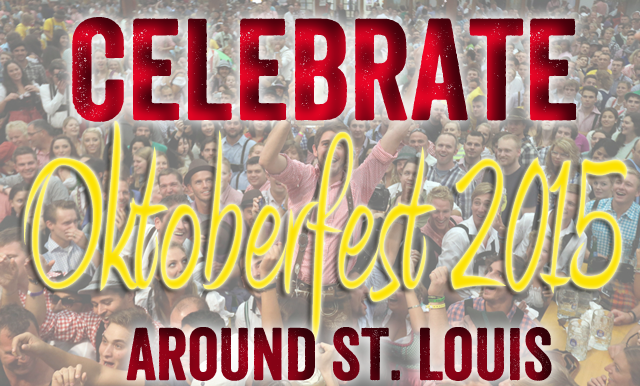 Here are the best place around St. Louis to get your “Prost!” on in celebrating Oktoberfest 20145.

The Saint Charles Oktoberfest will take place September 25-27 at Frontier Park in downtown Saint Charles. The festival will run from 4 pm – 11 pm on Friday, 10 am – 11 pm on Saturday and 10 am – 5pm on Sunday. A wide variety of bands will play at various locations throughout the weekend. Among the bands are the Obenheimer Express Band, That 80’s Band, Austrian Express, The Rough Ryders, Contagious, Petty Cash Junction, Joe Dirt and the Dirty Boys Band and more. Other events will include the Oktoberfest 5K and Root Beer 1 Mile Fun Run,  the Wiener Takes All Race, an Antique Car Show and more. The Samuel Adams Raise The Stein and the Swiss Meats Brat Eating Contest will be held for those wishing to show off their athleticism. 34 different beers will be available at the festival for purchase, including 31 on tap.

General Admission to Saint Charles Oktoberfest is free. VIP Tickets to the First Bank VIP Lounges are available for $50 for either Friday or Saturday of the festival.  VIP Tickets include access to both VIP Lounges, a VIP lanyard, a 32oz stein and koozie, 3 beer tickets $8 in Bavarian Bucks and a German pretzel. Unlimited soda and water are also available from the VIP tents with tickets.

Soulard Oktoberfest, will be held October 9-11 just across 7th street from the Soulard Farmers Market. Festivities will kick off on Friday October 9th at 4 pm and run until midnight. Saturday’s festivities will begin at 11 am and run until midnight while Sunday’s will also begin at 11 am but rap up at 7 pm. Three stages will feature musical acts like The Dorfrockers, The Polka Kings, The Soulard Blues Band, The Polkanauts and more. Games will include the Strongest Barmaid Relay, Masskrugstemmen and Brat Eating. Carnival rides and various vendors will also be on hand.

Anheuser-Busch InBev is hosting an Oktoberfest celebration at The Biergarten September 25-27. St. Louis is one of six cities across the country that the company is celebrating Oktoberfest in. The event will kick off on Friday September 25 with St. Louis mayor Francis Slay tapping the first keg. A local couple will get married on Friday night similar to the wedding of Crown Prince Ludwig back in 1810.  The rest of the weekend will feature plenty of Spaten, Franziskaner and other beers, plus food, fun and games.

Edit Cassie Chisholm and Mark Vanbibber will be the couple getting married on Friday night at Oktoberfest at Anheuser-Busch. They will then help Mayor Slay tap the ceremonial first keg.

Tickets are $30 for adults 21 and over. Each ticket includes a commermorative Oktoberfest stein, two beers and a food item. Youth tickets are available for $10 and include 1 food item and 1 soda.

Want to win two free tickets to attend Oktoberfest at Anheuser-Busch on Friday night, September 25th? Comment below and tell us your favorite beer to enjoy during the Oktoberfest season.

The 35th annual Belleville Oktoberfest will be held on September 18 & 19 in Belleville Public Square in downtown Belleville. This year, the festival will add another block onto its footprint as well as the Wiener Dog Race and a second stage. Bands taking the stages will include ÜberCool, Metal Studz, The Sunshine Boys, Rendition and more. The festival will open at 11 am on Friday September 18 and close at 11 pm that evening. Saturday will open with a vintage baseball game featuring the Belleville Stags at Hough Park at 10:30 am. The day will also feature the Wiener Dog Race, a Cornhole Tournament and a Vintage Car Show.

Urban Chestnut will hold their 5th annual Oktoberfest St. Louis festival September 25-27 at their Midtown Brewery & Biergarten. This will be the first year that the festival will stretch from Friday-Sunday. Admission to the festival is free with attendees encouraged to bring CASH as food and drink will be available for purchase. Urban Chestnut will be serving there own beers during the weekend and will also be featuring Oktoberfest offerings from Schlafly, Civil Life and 4 Hands. Live music will be on the agenda throughout the weekend with bands such as ÜberCool, the Bolzen Beer Bad, Wendle Band and Dave Hylla’s God Times Band taking the stage.