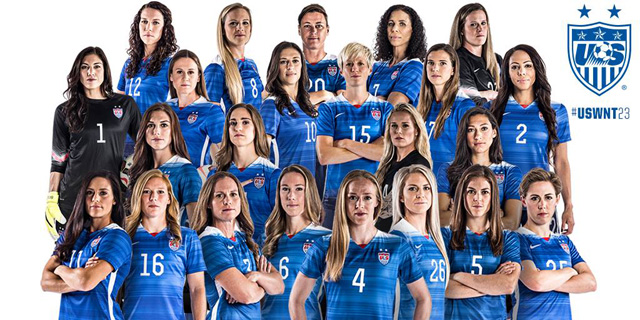 The U.S. Women’s National Team will play their Knockout Stage game tonight at 7 pm CST against Colombia in Edmonton.  The game can be seen live on Fox Sports 1, which can be found on AT&T U-verse on channel 651, 38 on Charter, 150 on Dish Network or 219 on DirecTV.

Colombia shocked France in the Group Stage, although both teams eventually moved on. For some odd reason, the Colombian players, namely Yoreli Rincon and Lady Andrade, have been talking about the USWNT quite a bit in the days leading up to the match, saying the team has disrespected them. In the FIFA World Rankings leading into the World Cup, the American side was ranked second in the world behind Germany while the Colombia side was ranked 28th. The French side that Andrade scored the winning goal against was ranked third.

The last time the USWNT and Colombia met, Andrade didn’t take the verbal shots that she has been this year, but she did take quite the physical shot at Abby Wambach in that game during the 2012 Olympics. Look at that eye. Don’t think Wambach has forgotten. While no players have responded to Andrade’s comments, which included predicting a 2-1 Colombian win, analysts Alexi Lalas and Heather Mitts have responded.

For coach Jill Ellis and the USWNT, St. Louisan Becky Sauerbrunn has been exceptional in the World Cup. While the offense has not really been there for the Americans, Sauerbrunn has teamed with Julie Johnston to anchor the back line. (Hint: Becky Sauerbrunn is a St. Louis soccer product.) The fact that the USWNT includes two St. Louisans in Sauerbrunn and Lori Chalupny is likely a reason why St. Louis has been the top market in the country for the team’s matches during this World Cup. Becky and Lori are the latest in a long line of St. Louisans influencing the beautiful game. Both play in their club ball in the National Women’s Soccer League, the latest in a line of women’s professional leagues that started in St. Louis back in 1950.

The U.S. Women’s National Team of course has fans far and wide pulling for them outside of St. Louis. Actor Tom Hanks counts himself as a big fan and took to Twitter yesterday to voice his support for the entire roster.

Sauerbrunn’s cohort on the back line, Julie Johnston, is a native midfielder that earned her way into the starting 11 on the back line after some injuries.  She’s also apparently pretty adept at coloring between the lines in a coloring book. The game tonight will be the first game that Johnston’s boyfriend, Zach Ertz of the Philadelphia Eagles, will be able to attend after finishing the team’s minicamp late last week.

Speaking of Chalupny, we haven’t seen her play a minute in this WWC. I am of the opinion that her play in the matches leading up to the tournament, including a goal against New Zealand at Busch Stadium, has earned her some playing time. There’s also that whole thing about U.S. Soccer keeping Chalupny away from the USWNT for five years.

The USWNT will wear their all-white home kits tonight in Edmonton. This is quite unfortunate. If you aren’t aware of the backstory on these horrible kits that Nike designed for the team, watch this video from Katie Nolan of Fox Sports 1.

Yes, U.S. Soccer let Nike put these women who work their asses off to play for their country in clown suits promoting Nike. If the team wore these for a friendly I wouldn’t like them but I wouldn’t be terribly mad. The fact that the powers that be are putting these women in these for the World Cup is disgraceful. Nike’s response to the criticism the kits got was even more ridiculous. The company’s representative has been drinking too much Kool-Aid if he really thinks that the players love these for any reason other than being told to. He also talks about how this “Volt Yellow” color Nike made up flows into the blue cleats that pay homage to the lakes of the host country. If Canada wants to pay homage to their lakes on their jerseys they can, but the U.S. jerseys should be all about the Red, White and Blue.

Sorry about the detour. I just really had to get that off my chest.

While Jill Ellis hasn’t released her staring lineup for tonight’s game, Lauren Holiday has released what the USWNT will be listening to before the game. It reads a lot like the current Billboard Top 40 with hits like “Shut Up And Dance”, “See You Again”, “Honey, I’m Good” and more of the like.

Alex Morgan has been making progress in her full return from a knee injury that has hampered her since a couple of months prior to the start of the tournament. Morgan says she feels ready to play  a full 90 minutes against Colombia. Abby Wambach stated yesterday for the first time that this World Cup will definitely be her last. Wambach is the all-time leading goal scorer in international soccer, men’s or women’s with 183. Her 14 goals in Women’s World Cup competition rank second all-time behind Marta’s 15. You can bet that she would love to tie Marta tonight against Colombia. While Wambach has won two Olympic gold medals with the USWNT, she has never won the World Cup.

Three games remain in the Round of 16 phase of this year’s Women’s World Cup. Thus far there has been one major upset. Australia knocked off Marta and Brazil 1-0 yesterday with a goal in the 80th minute. Germany handled Sweden 4-1, China beat Cameroon 1-0, France beat South Korea 3-0 and the host nation Canada moved on with a 1-0 win over Switzerland.

The winner of tonight’s match will move on to face China in the Quarterfinals on Friday night. The most important moment in the history of the U.S. Women’s National Team happened against China back in 1999. That moment was the last time the American women won the World Cup.

On July 5, they hope to hoist it again.