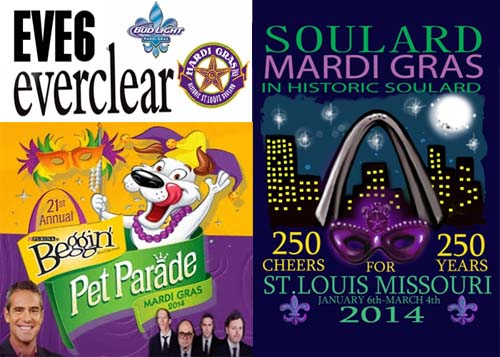 The Mardi Gras season began as it always does on January 6th of this year with “Twelfth Night”. It will go until Fat Tuesday on March 4th. Until then, the folks over at Mardi Gras Inc. have a scheduled jam-packed with events. There will be events for those of all ages ranging from a Children’s Carnival to Snowman Softball to two different parades.

Mardi Gras Inc. is the organization in charge of the Mardi Gras celebration in St. Louis and more exactly, the Soulard neighborhood.

Here are the events

The two day softball event featured 100 teams competing over the weekend. The Coed teams played on Saturday and the Men’s Division teams battled it out on Sunday. Participants were able to warm up in a heated tent complete with a DJ, full bar and food for sale. Proceeds benefited the St. Louis Police Athletic League.

In the Men’s Championship, Most Wanted got off to a hot start and held off a late Bombers rally to take home the Bud Light PAL Trophy

One of the coolest events of the Mardi Gras season. For $35 in advance and $40 at the door, you get unlimited drink samples from Jack Daniels and AB Inbev as well as food from Soulard restaurants. For the rest time in a number of year, this will be housed in the Bud Light Party Centre, a heated tent in Soulard Market Park.

Check out the highlights from last year’s event.

Come out and watch some of the best chefs in St. Louis compete in a cajun cooking cook-off. Also $35/$40 and happening in the Bud Light Party Centre. For the ticket price, you’ll get food, beer, SoCo Hurricanes and soft drinks. Unfortunately, the Health Department doesn’t allow for you to taste the cooking of participants like Josh Galliano, Brian Hardesty, Jack MacMurray and Ben Dressel

Held the morning of the first day of Taste of Soulard, this 5k features beer and hurricane stations in addition to water stations along the route. Prizes for first place in your division and also for best costumes.

$25 gets you a booklet with coupons for six food samples and 1 sample of Southern Comfort. Create your own crawl through Soulard, complete with shuttles running around the neighborhood. Each participating bar will offer a signature dish or drink for your ticket. You’ll definitely be full if you use all of your coupons.

The Pet Parade is the highlight of the season for many St. Louisans. Spend your Sunday surrounded by costumed pets. This year, the event’s 21st, will feature Andy Cohen as the Grand Marshal and a free post-parade concert by the Barenaked Ladies.

The Wiener Dog Derby features drag-racing dachshunds. It’s $10 to enter your furry friend, but free to watch. The event starts right after the parade in Soulard Market Park.

This is your chance to dressed up and party at City Hall as a guest of St. Louis Mayor Francis Slay. Proceeds from this event go to fund various projects around St. Louis and in Soulard. One of those projects was the planting of 160 trees in Soulard. Your ticket includes, dinner, dessert, premium open bar and music by Dr. Zhivegas.

The largest parade in St. Louis is the signature Mardi Gras event in St. Louis. It will step off at 11 am at Busch Stadium and travel south to the Anheuser Busch Brewery. After the parade enjoy music from Eve 6 and Everclear.  Many people just go down and walk around on Grand Parade Day, but you can also purchase tickets to individual parties, the most notable being the Bud Light Party Tent. Mardi Gras Inc. has partnered with the St. Louis Blues this year on a package that includes a tickets to the Bud Light Party Tent, a ticket to the Blues’ Fat Tuesday game against the Tampa Bay Lightning and a Blues t-shirt for one discounted price.

Here’s a post I did back in 2012 with some great tips for enjoying your Mardi Gras Grand Parade Day and making sure you don’t wreck anyone elses.

To paraphrase what I said then:

If you’re coming from outside the downtown area, take the Metro Mardi Gras Shuttle from the Civic Center station for $5.

Make sure you have a plan for the day and bring cash.

Get in line before you have to actually use the bathroom.

Charge your phone but make sure you aren’t staking your whole day on it.

The only Mardi Gras event held downtown this year, this parade happens on Fat Tuesday and closes the 2014 Mardi Gras season. The parade steps off from the corner of Washington and Broadway and will travel west on Washington though the Mercantile Exchange district to 14th street.