Note: This post was originally written in 2012. The 2016 Mardi Gras Bud Light Grand Parade will be held on February 6th. For more information on the 2016 Soulard Mardi Gras celebration go here. 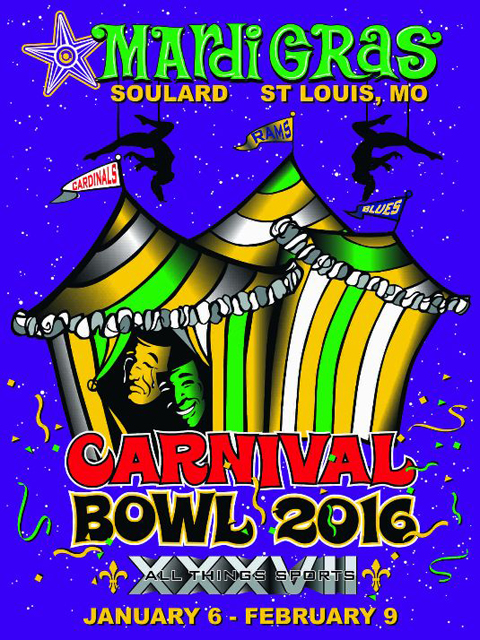 This Saturday brings us the flagship event of the Mardi Gras season in St. Louis, the Bud Light Grand Parade. Attendance varies greatly based on the weather, but I guarantee you there will be a lot of people down in Soulard. Parade starts at 11am over by Busch Stadium and runs south along Broadway to Anheuser-Busch. The best places to actually be close to the parade and see everying will be closer to the start or end of the parade. The thicker crowds will likely be between the Soulard Farmer’s Market and Russell Blvd in Soulard. Keep in mind that while crowds may be lighter on the East side of Broadway along the parade route, you won’t be able to cross over into Soulard while the parade is going on.

Here are a list of things that will keep you from looking like an idiot on Saturday:

Don’t think you are going to drive to Soulard.  Find a bar offering a shuttle or take public transit.  Metro is offering a $5 shuttle from the Civic Center Metrolink station to Soulard.  Do this. That’s the Scottrade Center stop for those of you not familiar.

Bring cash. ATMs have been brought in for the occasion, but get cash before you come down, even if it is just to avoid service fees. Some booths will be accepting plastic using Square, but still it is advised you bring cash.

Have a plan. Sure, you could just wander around and pay full price for beer and food.  Why not  get your ticket to the Bud Light Party Tent- $100. Don’t let the price fool you, this is worth every penny.  The heated tents hold 2,000 people and plenty of portable bathrooms are available only to those with the wristbands.  If you haven’t been down before, you know this alone is worth the money.  Also, it’s all-inclusive so, eat and drink away. You must order by Friday at 5pm, no sales at the door.  Here’s a list of some other packages available. Also, the Soulard Oktoberfest organization is throwing a party right off Russell.

Read the DO’s and DON’Ts. Don’t plan on bringing a backpack full of food and snacks.  Not allowed. Drinks should all be in plastic cups or the like.

Bring a camera. As someone who has read up and prepared for the day, you don’t want to miss capturing memories of those who didn’t. Yes, I know your phone can take pictures, but you don’t want to drain your battery.  That leads me to my next suggestion.

Charge your phone, but don’t rely on it. While AT&T and Verizon both have rolled in temporary towers for the festitivities, you never know how service is going to be.

Remember people live in Soulard. If you get busted doing something you wouldn’t do in your own neighborhood, be prepared to pay the price.

Get in line before you actually have to use the bathroom.  This one will take some planning, but you really don’t want to be at the back of a line 20 deep when you really have to go. If you have ever been in that situation, the $100 packages with private bathrooms look like a steal. Soulard residents have been known to keep buckets of water or hoses handy to deal with those using their alley or siding like a dog uses a tree. While the weather looks like it will be nice on Saturday, I bet being drenched still wouldn’t be pleasant.

If you didn’t read any of the things I wrote above, at least watch this video

The most important thing on Saturday is to have fun responsibly. Believe me, there are far too many repercussions from not being responsible.

Reminder: If you are a Soulard resident and didn’t get your parking permit in the mail, make sure to run by the Mardi Gras Inc office to pick yours up.  Don’t try to swing by there on Saturday morning…it will be too late.

Do you have anything to add? Any questions or comments?