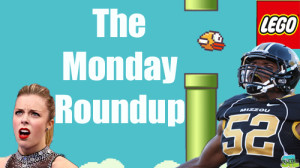 Michael Sam, the recently graduated University of Missouri Football player and reigning SEC Defensive Player of the Year, announced that he is in fact Michael Sam on ESPN’s “Outside the Lines” last night. The interview didn’t surprise anyone in the Missouri football family considering they all heard the same thing from Sam on August 15th during a team-building exercise. Sam was able to enjoy his Senior year as himself in Columbia while having a career season on the football field. Current and former Tigers voiced their support on Twitter and in the press last night, including former basketball star Laurence Bowers. Robbie Rogers, the openly gay Major League Soccer star, also voiced his support. Bryan Burwell of the St. Louis Post-Dispatch was apparently upset he didn’t get to write stories all season about Michael Sam being gay. How dare this awesome dude want to allow himself and his teammates to focus on football. Stories are of course coming out saying Sam’s NFL draft stock could drop, quoting anonymous NFL sources. Sam’s former teammate, Eric Waters, sent a tweet last night that has sports media around the country asking him to talk with them.

Waters tweeted this morning “Out of respect for my roommate and my teammate Mike Same I will not be doing any interviews. I have said all I have to say. Thank you”

Also check out Jon Stewart’s take on the situation from The Daily Show from last night.

Former Ram Tyoka Jackson talked to The Ryan Kelley Morning After show this and gave some quality soundbites on the topic. He supports Sam, wonders why in the world it matters if he’s gay and says how a team’s locker room handles being his teammate is up to the tone the team’s leadership.

The Copenhagen Zoo in Denmark killed Marius the giraffe yesterday and then performed an autopsy before feeding him to other animals at the zoo. What would make this story crazier? 1) Allow visitors to watch the giraffe get cut up in the name of education.  2) Include quotes about how Marius had to be killed as part of being part of some breeding program. 3) Have one zookeeper hold out some rye bread for Marius while another walks up behind him and shoots him in the head. 4) Do this despite an online petitions with 27,000 signatures and multiple zoos around the world offering Marius a new home.

So many things going on with the Sochi Olympics and it’s coverage. The NBC Luge commentator decided he wasn’t a fan of how American Kate Hansen warms up. Ashley Wagner, of Team USA figure skating was not happy about a score her routine got. 23 members of Team USA went to college at Westminster…in Utah. The American currently have two Gold medals and 3 Bronze medals in Sochi. Sage Kotsenburg was the first American to win Gold when he won in the Men’s Slopestyle. The pictures from the event were absolutely awesome.

Don’t piss Johnny Quinn of the U.S. bobsled team off because he may go all Incredible Hulk on you like he went on this door.

The Opening Ceremonies were a spectacle as always. Russia chose two athletes who have been victimized by Americans in great Olympic moments as part of their six-person torch lighting delegation. Vladislav Tretiak was the larger than life goalie for the USSR heading into the 1980 games. Rulon Gardner did the unthinkable in 2000 by beating Alexander Karelin. Alina Kabaeva was also part of the group. That totally didn’t have anything to do with her being Russian President Vladimir Putin’s rumored girlfriend. One of the Olympic rings didn’t work as planned, although Russian television viewers saw something different. This led to a rumor that the guy in charge of those rings mysteriously died shortly after.  NBC wasn’t any better by editing out the IOC President’s anti-discrimination speech as well as other stuff. The Russian police choir performed Daft Punk’s “Get Lucky” before the Opening Ceremony.

Did you wonder what was going on with the Parade of Nations? The countries entered according to the Russian alphabet.

Laurence Fishburn and Samuel L. Jackson look alike because they are black.

The drinks are piping hot and not intelligent at this parody coffee shop. Considering how quick Starbucks was to jump on local brewer Exit 6, it’s amazing this store lasted the weekend.

**Update** The Los Angeles County Department of Public Health came out to shut Dumb Starbucks down last night for operating without a health permit. At that time, the owner of the store came out to speak with the press. Comedian Nathan Fielder appeared at the microphone. The store was a stunt for his “Nathan For You” show that airs on Comedy Central. Here’s a link to a Entertainment Weekly‘s recap of his show’s 5 best stunts.

You have got to be nuts to shave one of your teeth down for a movie role. He also decided he want to fight someone at a bar, walked the red carpet with a paper bag on his head and then went all Eric Cantona and walked out of a press conference for Nymphomaniac after one question.

“Flappy Bird” is no more

Dong Nguyen, the developed who created the mobile game “Flappy Bird” announced that the game is being pulled from the Android and iOS markets. There were reports he was making up to $50,000 a day from in-game advertising on the game. It was only a matter of time before Nintendo came knocking at his door considering the game is a pretty blatant rip-off of Super Mario Bros. Even if that $50,000 number is even in the remote neighborhood off actual numbers, it’s a pretty good chunk of change for the 2-3 days he spent building the game.

Oklahoma State basketball star Marcus Smart shoved Texas Tech fan Jeff Orr on Saturday night during a game. Smart was chasing a play and went head-first into the stands. Orr heckled him and Smart shoved him after a brief verbal exchange. This caused the two older women next to Orr to freak out, as you can see from the animated gif  below. The women must be all sorts of crazy, just like Jeff Orr. Smart has been suspended for three games. Dana O’ Neil over at ESPN has a piece questioning why Oklahoma State coach Travis Ford let things get to this with Marcus Smart. Orr has “voluntarily agreed” to not attend a Texas Tech basketball game for the rest of the season. That statement is on a page that previously hosted a 2010 profile of Jeff Orr as a Red Raider superfan. Final thought? Off deserved to get shoved. Marcus Smart probably shouldn’t have shoved him but I don’t think he deserves a three game suspension.

The Lego Movie topped the weekend box office with a reported take of $69.1 million. The Monuments Men brought in $22.7 million in its opening weekend. Vampire Weekend bombed with an estimated $4.1 million opening. We’ll have more in our Weekend Movie Guide on Thursday, but until then enjoy this song from The Lego Movie, “Everything Is Awesome”.

And watch this baby loving him some Superman