If you’re a late night TV watcher and/or a fan of Jimmy Fallon, then you witnessed something awesome last Friday. That awesome thing was Jesse and The Rippers, aka hot Uncle Jesse Katsopolis from Full House and his band, as they re-united with an awesome medley of old songs including Hippy Hippy Shake and of course, the Full House theme song. It was an amazing performance ending with a surprise appearance by none other than Lori Loughlin, aka Aunt Becky! TGIF indeed, Jimmy.

This performance got me thinking about all of the great bands which have come and gone with each TV series and I wanted to hear them again. And lucky for you, it was so exciting reminiscing about all my faves that I decided to share them. Here are the Top 12 TV bands that rocked (or in some cases, are still rockin!) on this Throwback Thursday (picture hearing that being said Casey Kasem- style). 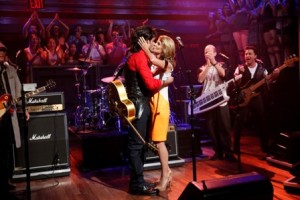 1. We’ll go ahead and start with Jesse and The Rippers

During their years on Full House, they played at D.J.’s prom and the Smash Club and then recorded the Beach Boys cover ‘Forever’ (and even made a music video). Here they are re-united for their 1-night only performance on Late Night with Jimmy Fallon, which was amazing!

I miss the good ole days of MTV before Real World vs Road Rules challenges, when music videos played regularly, and of course, they had shows like Daria. I’m not a big fan of animated TV, but I loved Daria and watched it regularly. And even though this may seem a bit creepy, I actually had a crush on Trent. Didn’t we all or was it just me? I mean the tattoo, the goatee and the rock band, it was hot. Here he is rocking out in Mystik Spiral with Daria watching in awe.

The band from My So Called Life made up of the great but never actually there, Tino, and almost lead singer, Rayanne, and the only band member we ever really see do anything musically, dreamy-eyed Jordan Catalano. But honestly, did anyone really care about the rest of the band anyway? Their performances consisted of Jordan singing “I Wanna Be Sedated” after Rayanne got stage fright and of course, the song that made all the girls swoon, “Red.”

Apparently a real A Capella group called The Blanks, they were for sure the band that got the most action in a TV series. They performed on many episodes of Scrubs and even though they mostly sang A Capella commercial jingles and t.v. theme songs, they ended up rocking it out instruments and all for Turk and Carla’s wedding. Oh, and their A Capella version of “Over The Rainbow” was excellent! Here they are with “Eight Days A Week.”

While the show was technically about the band, it was more of like a 90210, but where the band actually sang in every episode. Speaking of 90210, Jamie Walters and his beautiful voice made appearances on that show as well. I was really sad when they cancelled this show. What I think was really cool about the show was that the songs were actually good, good enough to make it on Music Charts including #1 on the Billboard Hot 100 Chart. I’ve actually had “How Do You Talk To An Angel” downloaded for years. It’s a great song!

California Dreams (the show) was awesome! Another TV show centered around teens in a band with typical ’90s teen issues. Gotta love the ’90s. They actually re-united on Late Night With Jimmy Fallon as well in 2010. I love Jimmy for getting all these reunions together!

Is there anyone in the world who’s not a fan of Buffy The Vampire Slayer? And who didn’t love Seth Green playing Oz the werewolf/rock musician. Not what you think of when you picture Seth Green. But the band was pretty regular on the show, appearing at the end of episodes when the gang would head to The Bronze after kicking butt all day. Although, this is one TV band that didn’t actually have musical talent. The band behind Dingoes was actually Four Star Mary.

One of the saddest moments in my life – The Office Finale. While the band mostly just consists of Kevin talking about his band, they did get the chance to perform at Phyllis’ wedding and they rocked it. I couldn’t find a video of them performing on that episode, but I did find one with Scrantonicity performing “Roxanne” with Kevin on lead vocals at an Office convention. I’ll miss you Jim and Pam!

Ahh Gilmore Girls! One of my favorite shows of all time! How could anyone not love Lane, even though the band she was obsessed with was not so good. Nonetheless, it was a major part of her character, including her romance with Zack, the lead guitarist. And what’s even cooler is that they somehow got Sebastian Bach to become the lead singer for the band. Not only because he’s a famous musician but also because he’s much older than the rest of the band and it made for a very…eccentric band dynamic. Here’s a great performance of their “rock” version of “Believe It Or Not.”

Jeff and Lester, Chuck’s co-workers at BuyMore, created Jeffster!. They’re a cover band, and not exactly musically-inclined, but they’re still awesome. They even made a surprise appearance at Comic Con 2009 with “Fat Bottomed Girls.” In the finale, they sang “Take On Me” and it was spectacular. This is one t.v. band I’m going to miss. Poor Chuck, 5 seasons just wasn’t enough.

While this might be the shortest lived TV “band” of all time, it is certainly one of the most well known songs ever made from a TV band. Everyone knows “Dayman.” I couldn’t find the video of them actually performing in full costume, but I guess you could consider this their band practice video.

12. And last but not least, Mouse Rat (aka Scarecrow Boat)

A band that’s still alive. Parks and Recreation’s very own Andy Dwyer is the lead singer. Parks and Rec is already one of the funniest shows of all time, and good ole Andy and his band Mouse Rat only make it better. One thing that’s cool about them is that they’re not a cover band. These are original songs. Good or not, they’re original. For example: “5000 Candles in the Wind,” written from the heart for Li’l Sebastian’s memorial service after Leslie asks Andy to write a memorial song. “Something like Candle in the Wind, but 5,000 times better.” We love you Andy.

This Weekend in St. Louis Ryan 855 days ago.

This Weekend in St. Louis Ryan 856 days ago.