The new Kiener Plaza downtown will host the first sip of summer in St. Louis next month with music from Gavin DeGraw and NEEDTOBREATHE, as announced recently by CBS Radio St. Louis.

St. Louis Uncorked, presented by American Eagle Credit Union, will be held June 2-3, 2017 and will move to the newly-renovated Kiener Plaza from its previous Soldiers Memorial home. 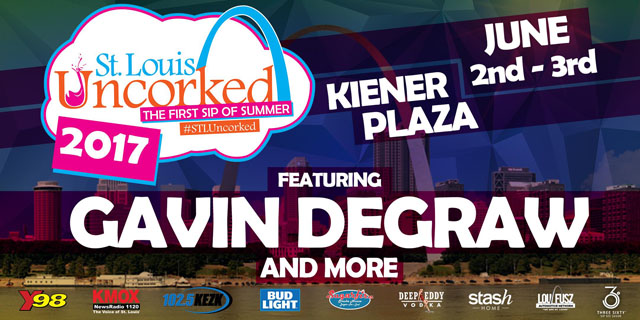 Gavin DeGraw and NEEDTOBREATHE have been announced as the headliners of this year’s festival. Tyler Hilton and Ryan Cabrera will also be on the bill. DeGraw will peform on Saturday night, June 3.

DeGraw played the Peabody Opera House here in St. Louis last year with another Uncorked alum, Andy Grammar. Grammar headlined the festival in 2014 along with A Great Big World. Hanson, Jillette Johnson, Marie Miller, and Oh Honey! are among the other acts to have graced the Uncorked stage.

Admission to the festival is free each day. Food and drinks, including wine, are available for purchase. Other highlights include Lou Fusz Lane, where some of the newest vehicles on the market will be on display. On Saturday, Fredbird of the St. Louis Cardinals will make an appearance and Club Fitness will be conducting a free yoga session. Hautly Cheese and Lemon Lemon will be among the companies on hand with exhibits and samples.

Tickets are on sale now for the Bud Light Party Plaza. Tickets include drinks from sponsors Bud Light, Deep Eddy Vodka, and Jameson as well as featured wines. From 7 pm – 10 pm each night, food from Sugarfire Smoke House will also be served. Ticket-holders will have access to the VIP area, which includes private restrooms, throughout the night and will receive complimentary entry into 360 at the Hilton at the Ballpark after the event.

Bud Light Party Plaza tickets are $55 each night and can be purchased through Eventbrite.

Want to be close to the stage, but the Party Plaza isn’t for you? Grab a Club Fitness Pit Pass from any St. Louis area Club Fitness location.

For more information on the 2017 St. Louis Uncorked festival, check out the website.