Saint Louis FC takes on FC Cincinnati on Saturday April 15 at Nippert Stadium in Cincinnati. The match will be Cincinnati’s first match at home this season and a larger-than-normal crowd is expected for their 2017 home opener.

Fans in St. Louis can see the match live on YouTube and on local television on KPLR 11.

Kickoff on Saturday is set for 6 PM St. Louis time. 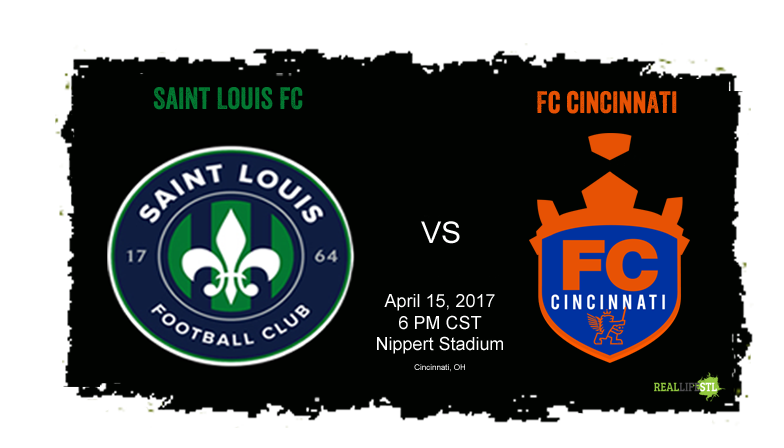 The local lads are 3-1-0 on the season and sit atop the United Soccer League’s Eastern Conference. With ten points, STLFC has more points than any club in the league. Tampa Bay and Real Monarchs SLC are both undefeated on the season, but have played just three games apiece.

FC Cincinnati is 1-0-2 on the young season. While STLFC has a goal differential of +3, Cincinnati has scored two less goals than its opponents this season. The club’s two losses have come to Charleston and Bethlehem by scores of 2-1 and 2-0, respectively. Its lone win came against the aforementioned Riverhounds, 1-0.

Saturday’s match will be the first of the season for the club played on short rest. 18 players have seen action for Saint Louis FC head coach Preki this season with 16 of those starting at least one game. That short rest, coupled with injuries could mean some new faces seeing action in Cincinnati.

17-year old Aedan Stanley of Columbia, Illinois was among four STLFC Academy players signed to the roster earlier this month. He was on the bench in Pittsburgh, but did not see action. He was a second half substitute for the top club in a match late last season and could see the pitch on Saturday.

In total, eight players have played at least 270 of the club’s 360 minutes play this season.

Christian Volesky will look to extend his three-game scoring streak on Saturday. He leads the club with three goals and two assists on the season.

What To Expect In Cincinnati

Djiby Fall has scored both of FC Cincinnati’s goals this season with both goals being assisted by Andrew Wiedeman.

Cincinnati will be without several players on Saturday. Defender Paul Nicholson received a red card in the club’s last game and will miss the match due to suspension.

Justin Hoyte will also miss Saturday’s match after being injured last weekend. The veteran of the English Premiere League was signed back in late March by Cincinnati.

FC Cincinnati announced earlier this week that they have sold more than 15,000 tickets for Saturday’s game. Consdering the club has more than 11,500 season ticket holders and averaged 17,296 fans per game last season, Preki and STLFC have been fully anticipating playing in front of a rowdy crowd this weekend.

Saint Louis FC played at Nippert Stadium last September, but the field will be a bit different this time around. Futbol Club Cincinnati spent $2 million during the offseason. Five feet was added to both the length and width of the field, bringing it in compliance with MLS and FIFA regulations.

James Gamble Nippert Stadium sits on the University of Cincinnati campus and is the home of the Bearcats football team. Construction on the stadium started way back in 1915 and was completed in 1924.

Saturday’s game in Cincinnati will be the first of ten matches televised locally this season on KPLR 11. Saint Louis FC is purchasing the time on the station and the broadcast will be produced by the USL.

KPLR has been a staple of St. Louis since its first broadcast in 1959. That first brodcast also featured a Cincinnati sports team as it featured the St. Louis Cardinals taking on the Cincinnati Reds. The station would host Cardinals games until 1996. The network also was the television home of the St. Louis Blues and St. Louis Steamers had their games on the network in the early 1980s.

For some local flavor, watch the game on mute and tune into KTRS 550 AM. Their radio broadcast of the game features Jim Heuer and local soccer legend Bill McDermott.

As with all USL matches, Saturday’s will be streamed live on YouTube. We’ve embedded the broadcast below.

Need something more to get you in the mood for the game? Listen to the latest episode of the This Is Silly! podcast from the St. Louligans.