Two pharmaceutical commercials from Valeant were the lowest-scoring ads.

We’ve added commercials below that weren’t released online prior to the game.

Any commercials we didn’t include can be found here.

If you are the kind of person who wants to be surprised of Sunday February 7, 2016 then don’t scroll down.

If you are the kind of person that doesn’t want to scroll all the way through this post, check out the nifty playlist we’ve made on Huzzaz featuring all of the Super Bowl 50 commercials below. 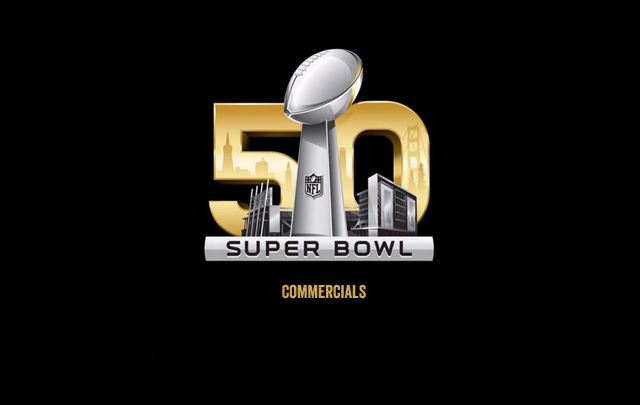 An unborn baby chases Doritos chips in this commercial.

Dogs chase Doritos chips in this ad from Doritos.

The world-famous Budweiser Clydesdales will make an appearance in a Budweiser Super Bowl 50 commercial, albeit a brief one. The company released the commercial, with the hashtag #NotBackingDown,on YouTube in advance of the game. The ad is part of the company’s series of commercials promoting their “macro” status.

The National Council on Alcoholism and Drug Abuse is again running a commercial locally during the Super Bowl this year. Last year, the council ran a PSA on heroin abuse that had the whole country talking.

“Give Me an H” is set to air right before the second half begins. It was filmed locally and Lafayette High School and features local actress Tori Giessing. The Superintendent of the Rockwood School District, Dr. Eric Knost, released a statement on the filming yesterday on the district’s Facebook page. He voiced his support of Lafayette High and the district commitment to the community and the NCADA.

Pantene will air commercials on Sunday that are part of their ‘Strong Is Beautiful” campaign. The ads feature NFL players doing their daughters’s hair. DeAngelo Williams, Benjamin Watson and Jason Witten are each featured with their respected daughters.

It’s not clear right now which commercials will air during Super Bowl 50. Watch all four #DadDo commercials in this Huzzaz playlist below.

Squarespace is taking a unique approach to advertising during Super Bowl 50. Their ad encourages you to tune into a webpage off the Squarespace main page where Key and Peele will be hosting, as Lee and Morris, a live commentary show regarding the game.

Kevin Hart stars as an over-protective father in this Hyundai commercial. The ad promotes the Car Finder feature in the 2016 Hyundai Genesis.

Mountain Dew is promoting its Mtn Dew Kickstart energy drink with something called a “puppymonkeybaby” in this spot set to air during Super Bowl 50. The commercial urges fans to use the hashtag #puppymonkeybaby

LG chose this year to show their first-ever Super Bowl commercial. The “Man From The Future” spot features Liam Neeson and is directed by Ridley Scott promoting their Signature OLED TV.

Anheuser-Busch will show an anti-drunk driving ad at the Super Bowl for the first time since 2005 this year. Helen Mirren stars in the Super Bowl 50 commercial titled “Give A Damn”. The Budweiser ad encourages folks to share the ad using the hashtag #GiveADamn. The company worked with Twitter to develop a custom emoji to pair with the hashtag.

Surprisingly, the NFL is behind this video featuring children and adults said to be conceived shortly after their hometown teams won the Super Bowl. Participants, range from those born around Green Bay after Super Bowl I in 1967 to babies born around Seattle in 2014, form the “Super Bowl Babies Choir” and singing to the tune of Seal’s “Kiss From A Rose”. Seal himself sings parts of the song as well.

The commercial is part of the NFL’s “Football Is Family” campaign, which those of us in St. Louis know is a complete joke.

Anheuser-Busch will advertise Shock Top for the first time during the Super Bowl this year. Here’s an extended cut of the commercial, titled “Unfiltered Talk” and featuring T. J. Miller going head to head with a Shock Top draft handle in an epic battle of verbal jabs.

The Heinz ketchup commercial set to air during Super Bowl 50 features plenty of dachshunds dressed as hot dogs running towards humans dressed as condiments. The ad is part of the company’s Meet The Ketchups campaign, which uses the hashtag #meettheketchups.

AXE is the Nickelback of body washes and you can probably guess where their Super Bowl 50 commercial is going.

Colgate is using its Super Bowl ad time to encourage people to help the environment by turning the water off while brushing your teeth. Remember, #EveryDropCounts.

Death Wish Coffee Company of Saratoga Springs, New York wouldn’t normally be able to spend the money for a Super Bowl commercial. They didn’t pay for this one either. The company won the Small Business Big Game contest sponsored by Intuit QuickBooks and thus won the right to produce and air this commercial comparing the strength of their coffee to a ship full of Vikings sailing through a storm. Here’s a video of Mike Brown, the owner of Death Wish Coffee, talking about the experience.

Honda is advertising the return of the Honda Ridgeline in its Super Bowl 50 commercial. If you like talking animals and the band Queen then you should watch this.

Hyundai is promoting the ability to start the new Hyundai Elantra remotely using Blue Link in this Super Bowl 50 commercial.

Ryan Reynolds stars in this Super Bowl commercial for the 2017 Hyundai Elantra and its Automatic Emergency Braking with Pedestrian Detection feature.

MINI urges you to “defy Labels” in its Super Bowl 50 commercial. Serena Williams, Abby Wambach, T-Pain and Tony Hawk are among the celebrities that call out the car’s stereotypes in the spot.

Pokémon returns to the Super Bowl to celebrate its 20th anniversary.

Quicken Loans “What We Were Thinking”

Quicken Loan promotes its Rocket Mortgage product and in this Super Bowl spot titled “What We Were Thinking”. The ad touts the effect on the economy new home buyers have.

Apartments.com “Movin On Up” Super Bowl Commercial
The Apartments.com Super Bowl 50 commercial is now available to view ahead of the game. The ad again features Jeff Goldblum as “Silicon Valley Maverick” Brad Bellflower, who has been part of their ads since the company was bought by Costar. Goldblum plays “Movin’ On Up” on a piano and happens to come across George Washington and Lil’ Wayne. The commercial is part of the company’s new “Movin’ On Up” marketing campaign.

Be sure to check back often as we’ll update this post with more Super Bowl 50 commercials as they are released.