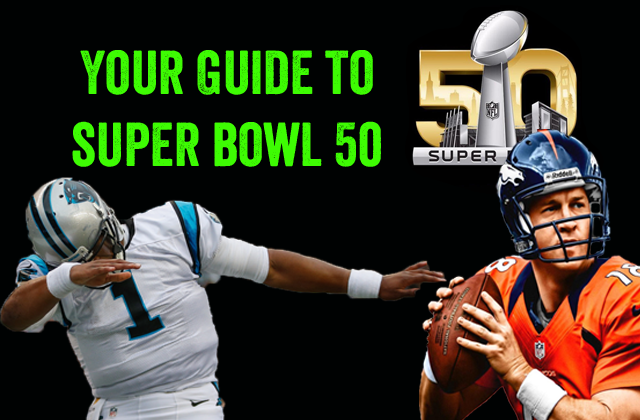 Your Guide To Super Bowl 50

The big football game for all the NFL marbles, corrupt as they may be, is this Sunday. The Carolina Panthers and the Denver Broncos will battle for the Vince Lombardi Trophy in Super Bowl 50.

The actual football is likely the least important aspect of the Super Bowl for many, unless your team happens to be playing in the game. With that being said, most of us will still be watching the game or at least attending a gathering that centers somewhat around the game being on the television. You don’t want to be “that guy/girl” that knows absolutely nothing about the game.

Also, don’t be the person that thinks they are cooler because they “don’t care about the Super Bowl.”

Here’s a primer for those of you that may not be well-versed in this stuff to give you the resources to at least have something to start a conversation on Sunday.

The hottest topic at many Super Bowl soirees is the Super Bowl commercials. In recent years, companies have started releasing their commercials in advance on YouTube. Don’t be the person that spoils commercials for other people, but watching some of these beforehand will likely still come in handy. We’ve put together all of the ads already released in one place to help you out.

One of my favorites thus far is this commercial from Pantene starring DeAngelo Williams of the Pittsburgh Steelers and his daughter. It’s part of their Dad Do series of ads.

The National Anthem And Halftime Show

Closely behind the commercial talk will be conversations around the National Anthem and the Pepsi Halftime Show, but there will also be other music to tune into before the game.

Sam Hunt and Seal will headlining the Super Bowl 50 NFL Tailgate Party, which will be televised on the CBS pre-game show. Country singer Hunt was a better-than-average quarterback while in college at Middle Tennessee State and the University of Alabama at Birmingham.  Seal will also make an appearance during the game in the NFL’s Super Bowl Babies Choir commercial, which you can view at the link above.

Lady Gaga will sing “The Star-Spangled Banner” at Levi’s Stadium before the game.

Coldplay will headline the Pepsi Halftime Show with special guest appearances by Beyonce, Youth Orchestra Los Angles and others. Organizers are setting their sights on matching or exceeding the massive shows seen in recent years. Hamish Hamilton, the director the the Halftime Show, recently told Forbes that the fact that this year the show will happen during the daylight hours is a new unique aspect.

While there isn’t a lot of actual “playing time” in football games, you’ll still want to know the basics for your conversations.

The Carolina Panthers come in to Super Bowl 50 with a 15-1 record on the season. The Denver Broncos stand at 12-4. The one Carolina loss came in the second-to-last week of the regular season to the Atlanta Falcons, 20-13.

The Panthers beat the Seattle Seahawks 31-24  and the Arizona Cardinals 49-15 to make it to Sunday. The Broncos beat the Pittsburgh Steelers 23-16 and the New England Patriots 20-18 en route to Santa Clara.

The Carolina Panthers are led by quarterback Cam Newton. Newton is in his fifth season out of Auburn. Newton famously played one year at Auburn, where he led the team to the BCS National Championship and won the Heisman Trophy as the best player in college football. Carolina drafted him #1 overall in 2011.

The Denver Broncos are led by the immortal Peyton Manning, currently in his 18th season in the NFL. Manning has been named NFL MVP five times, been to the Pro Bowl 14 times and earned a Super Bowl ring with the Indianapolis Colts in 2007, where he was also named the game’s MVP.

Neither quarterback is without controversy. Newton started his college career at Florida but was dismissed from the team after being charged with stealing a laptop from another student. When officers arrived at his dorm room about the incident, he threw the $1,700 laptop out the window. After attending a junior college, Newton enrolled at Auburn, where questions still remain about how he ended up there.

Manning has built a sparkling reputation with the play on the field and his endorsements with Papa John’s and Nationwide, but things may not be squeaky clean. While in college at Tennessee in 1996, Manning allegedly sat on a female trainers face, sans clothing. The trainer brought the incident to the attention of the Sexual Assault Crisis Center on campus. He was sued in 2002 by the trainer after writing about the incident

Manning was also recently accused of taking performance-enhancing drugs, something he has denied. It was also recently revealed in a Washington Post article that Manning hired his own team to investigate that matter.  Investigators allegedly visited the home of the accuser’s parents claiming to be law enforcement.

Manning has dropped clues that he intends to retire after this season, however the former St. Louis Rams have reportedly been talking about bringing Manning on for next season. Because of course they would do something like that.

Would a Super Bowl ring get Cam Newton the respect he has earned?

We’ll find out this Sunday.