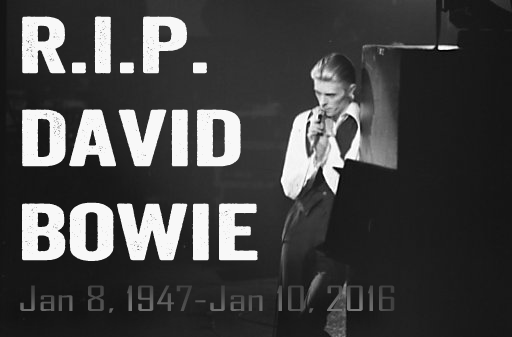 Singer David Bowie passed away yesterday after an 18-month battle with cancer. The singer released his 25th studio album, Blackstar, last Friday on his 69th birthday. A song on the album, “Lazarus”, and its accompanying video, are being seen as Bowie’s “farewell” song.

Rocker Sammy Hagar, a St. Louis favorite will headline Fair St. Louis 2016. Fair organizers had intended to make the announcement this spring but were forced to make it early after someone posted the information on Hagar’s website. “The Red Rocker” and his band will play Forest Park on July 3. The rest of the musical entertainment is expected to be announced in the spring.

The Hollywood Foreign Press Association awarded The Martian the Best Picture trophy in the Best Motion Picture, Musical or Comedy category last night at the 73rd Annual Golden Globe Awards. The Verge posted a piece last night about the absurdity of the HFPA classifying Matt Damon’s film as a comedy to avoid The Revenant, which won the award in the drama category.

Leonardo DiCaprio won a Golden Globe for his role in that film. His win is seen by many as a solid step towards winning his first Academy Award later this year. DiCaprio has been nominated for four Oscars dating back to 1994, but never won. This year’s Oscar nominations are set to be announced this Thursday.

Slyvester Stallone won last night for his role in Creed, giving him the inside track for his first Oscar. He was nominated in two categories back in 1977 for his work on Rocky. When Stallone took the stage to accept his award, he was greeted with a standing ovation from the crowd. Stallone brought his wife and three daughters with him to the event. His son Sage passed away in 2012, a fact he talked about with reporters after his win.

Other winners at the 2016 Golden Globes included Jennifer Lawrence, Kate Winslet, Aaron Sorkin, Inside Out and Mr. Robot.

People has a roundup of the best-dressed actresses on the 2016 Golden Globes awards red carpet. Jennifer Lawrence, Olivia Wilde and Lady Gaga were deemed to be among the best-dressed.

The Revenant brought in an estimated $38 million in its nationwide debut over the weekend, but Star Wars: The Force Awakens topped the weekend box office with an estimated $41.6 million in its fourth weekend. The seventh installment in the Star Wars franchise has now grossed more than $812 million domestically and $1.7 billion worldwide in less than four weeks in theaters.

The Forest, which also debuted over the weekend, brought in an estimated $13 million.

Check back with RealLifeSTL on Thursday for my Weekend Movie Guide. I’ll take a closer look at the weekend box office numbers as well as the movies debuting this weekend,

Tonight’s College Football Playoff National Championship game pits 13-1 Alabama against 14-0 Clemson in Glendale, Arizona. The Crimson Tide are a seven point favorite tonight according to the gambling books. Several Clemson Tigers have said that Alabama being favored is due to their “band”, not their resume this season.

The match-ups for the NFL Divisional Round playoff games next week are set. In the first game on Saturday, January 16, the Kansas City Chiefs will play the New England Patriots in Foxboro. In the second game, the Green Bay Packers play the Arizona Cardinals in Arizona. On Sunday, January 17, it’ll be Russell Wilson against Cam Newton as Seattle plays at Carolina. Pittsburgh at Denver caps off the weekend.

A wild Wild Card weekend saw Kansas City win their first playoff game in 22 years by shutting out Houston 30-0. The winning points for Kansas City were scored by Knile Davis on a 106-yard kickoff return to open the game. The Chiefs have now won 11 games in a row. Their last loss came on October 18, 2015.

In the other Wild Card playoff games, Pittsburgh beat Cincinnati 18-16 and Green Bay beat Washington 35-18. Kicker Blair Walsh could have sent the Minnesota Vikings to next weekend’s games, but instead lived a nightmare and saw Seattle move on with a 10-9 win.

No one in the nation had all of the winning numbers in the Powerball drawing over the weekend. That jackpot was a record $900 million. The jackpot for the drawing this Wednesday is expected to be AT LEAST $1.4 billion.

Dallas Mavericks owner and billionaire Mark Cuban recently shared some tips for the eventual winner. Among his tips, Cuban advising hiring a tax attorney, telling friends and family “NO” and against making investments.

Korean pitcher Seung-hwan Oh has signed with the St. Louis Cardinals. It’s been said he has the best nickname in sports as it translates to “The Final Boss” in English. The righter-hander played nine seasons in the Korea Baseball Organization, where he’s considered the best closer in the history of the league with a combined 1.69 ERA. Seung-hwan has played the two seasons in Japan and his put together a career 1.81 ERA in his 11 professional seasons. He has racked up 357 saves and an impressive 10.7 strikeouts per nine innings. The 33-year-old reliever is not subject to any sort of the usual fees paid for players from the Korean of Japanese leagues due to his service time.

If Oh, who had Tommy John surgery about 10 years ago, were to go back to playing in the KBO, he would be subject to a 72-game ban for illegal gambling. His crime? Being a Korean and gambling in a casino outside Korea.

St. Louis’s Union Station is about to get a huge face-lift. Lodging Hospitality Management is set to begin construction on a huge renovation project on February 1. Part of the project will turn the mall area of the station, once thriving but now largely vacant, into 48 hotel rooms and 30,000 square feet of event space.  The iconic train shed will also be restored to look more like it originally did, according to LHM’s chief executive, Bob O’Loughlin.

The iconic Fudgery shop and all the singing that comes with it is slated to stay in Union Station, as is the St. Louis Cardinals fan shop, according to the St. Louis Post-Dispatch.

A roller coaster that was originally planned for the project is no longer included, but there will be a 200-foot tall Ferris wheel, dubbed the St. Louis Wheel, that will have 42 gondolas that can each accommodate eight adults. One of the gondolas will have upgraded seats, it’s own sound system and a glass floor.

Re-purposed shipping containers will be used in Union Station’s outdoor area for a food court and event space. A “Tube Light Show” is also planned.

Messi won the award with more than 41 percent of the vote. Ronaldo was second with almost 28 percent and Neymar was third with just under 8 percent.

American Carli Lloyd was named the FIFA Women’s Player of the Year today. Lloyd earned the award on the back of a magical performance leading the United States Women’s National Team to the 2015 Women’s World Cup title. Lloyd saved her best performance for the World Cup Final, where she recorded a hat trick in the game’s first 16 minutes.