Fans of cult classics like Star Wars have a long history of dressing up in costume for movie premieres. Whether you’re dressing up as  a classic character like Darth Vader or Han Solo or a new one like Kyle Ren or Rey, you’ll have plenty of fellow costumed friends.

Unfortunately, idiots have ruined things a tad. Many theaters across the country won’t be allowing fake weapons like light sabers or mask’s like Vader’s into theaters when Star Wars: The Force Awakens opens later this month.

Whether you are dressing up to be seen before the movie or getting in costume for a Star Wars viewing party with friends, here are some Star Wars costume suggestions. 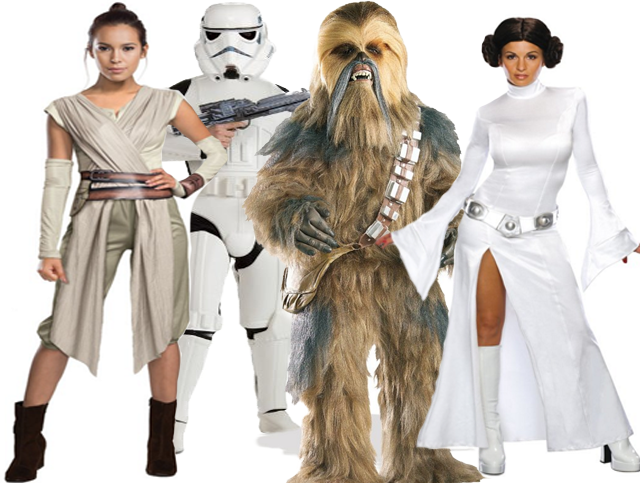 This costume is a full length body suit with molded body armor. It includes a latex belt and a two-piece helmet. Buy it from Amazon for $55 – $95. Looking for more of the “Sexy Stormtrooper” look? Grab this costume from Target. The boots pictures are unfortunately not included.

Would you rather make your own Star Wars Stormtrooper costume?

Rey is expected to be the heroine in Star Wars: The Force Awakens and it’s entirely possible she’s Luke Skywalker’s daughter. You can don the Daisy Ridley look with this costume from Amazon. It’s an officially licensed costume made by Rubie’s and retails for $80-$90.

Want to rock that Harrison Ford look from the original films?  This Han Solo costume from Party City is a great value at $39.99. The costume comes with the shirt and attached vest, pants and boot tops.

Would you rather make your own Han Solo costume and happen to be fairly talented at sewing? Check out this guide from StarWars.com. Here’s a guide for a female Han Solo outfit too.

Do you like to get in touch with your dark side every time you can? Here’s a great deluxe Darth Vader costume from Target. This 5-piece costume set retails for $76.99 – $86.99 and includes a replica mask of Darth Vader’s signature helmet, a black cape, printed jumpsuit, boot tops and a belt.

Are you a mom having a kid-friendly (5 of the first 6 films are rated PG after all) Star Wars party? Check out the Darth Vader costume this mom made.

You won’t be able to wear the head in most theaters, but want to really go big with your Chewbacca attire? Buy this Chewbacca costume from Rubie’s. The costume was $750, but it’s on sale on Amazon for just $377.90

Looking to dress your kid up as a younger wookie? Here’s how to make a great wookie costume.

Not really down to dress as own of the human Star Wars characters? There are some options out there for you to go as droids C-3PO or R2-D2 or bring your toddler to a viewing party of the old films as C-3PO. We don’t advise bringing your toddler to a theater. That likely won’t end well for anyone.

Are you looking for an adult C-3PO costume? Here’s one option. Are you a lady going for more of the sexy C-3PO look? Spencer’s has you covered with this C-3PO corset.

Carrie Fisher performance of Princess Leia in the original films  forever made the character a sex symbol. The hair is so iconic that many of the costumes come with wigs because who has time for that?

This Secret Wishes Princess Leia Costume from Amazon knocks it out of the park with the white dress and belt and the wig. The Go-Go boots come separate but are a must for this costume.

Would you rather have the outfit that Jabba The Hut made the Princess wear? Here’s a version of the Princess Leia Slave Costume on Jet. Just read up on the history of that “Slave Leia” outfit before you go out in public in it.Then when that gets you down, go back to reminise about when Amy Schumer was on the cover of GQ as Princess Leia.

Jabba The Hut isn’t really one of the more popular costumes that fans wear to movie premieres. That’s probably because being movies theater seats aren’t really made for alien creatures the size of a hut. This inflatable Jabba The Hut costume from Amazon isn’t one you’d wear to the theater, but it is rather awesome and can be yours for just $89.98.

Are you thinking you want to dress as a Jedi warrior? Maybe Anakin Skywalker before, ya know, that thing happened? A Jedi warrior costume is  one of the more elaborate ones done right. If you dress up more that just for the movie premieres, grab this Anakin Skywalker Jedi Knight costume from Jedi-robe.com.

Thinking you don’t really need the full outfit, but you would like a sweet Jedi robe? Well, here’s how to make a Jedi robe.

Looking for somewhere local to shop for your Star Wars costume? Check out Johnnie Brock’s Dungeon.

Are you thinking more along the lines of wanting to show that you’re a fan, not some “poser” but not really feeling the full costume look? Here are some other Star Wars fashion options.

While wearing these won’t scream from the rooftops that you’re a Star Wars fan, they are a subtle way to show your fandom.

There are plenty of Star Wars boxer options available. There are Chewbacca ones, Han Solo and Luke Skywalker ones, Darth Vader ones or even Star Wars Christmas boxers.

Don’t Mess With A Princess Shirt

This women’s shirt from Amazon features a drawing of Carrie Fisher as Princess Leia holding a gun with the words “Don’t Mess With A Princess” bordering the picture.

Feeling like you need something Star Wars to wear to an Ugly Christmas Sweater party? Check out this Darth Vader “Holiday Sweater” sweatshirt from Kohl’s.

This Boba Fett Adult Jumpsuit will transform you into “the best Bounty Hunter in all of the known universe” as the top review says.

Wondering how you get the really high fashion Star wars looks? Here are the looks that graced the runway at the Force 4 Fashion fundraiser.

Need more Star Wars talk? Check out our guide to getting ready for Star Wars: The Forces Awakens.

This Weekend in St. Louis Ryan 808 days ago.