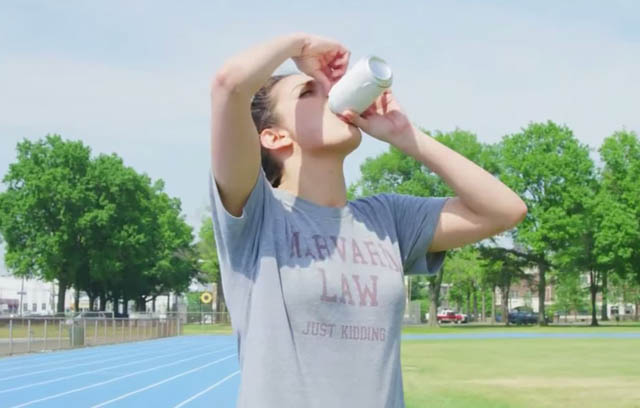 Katie Nolan is a personality on Fox Sports 1 who currently hosts Garbage Time With Katie Nolan.

Here she attempts the Beer Mile. If you aren’t familiar with that, it means you have to chug 4 beers and run 4 laps equaling a full mile. The World Record, according to BeerMile.com, is 4 minutes and 57 seconds. That record is held by James Nielsen, who recorded the feat in 2014 in San Francisco, CA while drinking Budweiser. The female record is held by Elizabeth Herndon, who set the record last year in Austin, Texas while drinking Fat Tire and running the mile in 6 minutes and 17 seconds.

Katie Nolan’s Beer Mile was not completed in 6 minutes and 17 seconds.

Speaking of Katie Nolan, she recently interviewed former St. Louis Cardinals player A.J. Pierzynski. A.J. is awesome and we miss him in St. Louis. He talks about the art of cursing at umpires, John Cena and rally beers, among other things.

Every Easter Egg In Jurassic World

Jurassic Park fans have been having a grand old time finding “easter eggs” in Jurassic World. Here’s a video made by a YouTuber compiling most of the eggs found thus far.

Colin Yost, the valedictorian of the 2015 Portsmouth High School graduating class, coordinated this awesome flash mob to Taylor Swift’s “Shake It Off”.

The latest animated fly-through of the proposed north riverfront stadium in downtown St. Louis features the voice of Joe Buck. The video, released by design firm HOK, features renderings of how the stadium would look as an NFL stadium and also as an MLS stadium.

The story of the infamous 1971 Stanford Prison Experiment comes to the big screen on July 17, 2015.

Clint Dempsey Gets Red Card For Ripping Up Referee’s Notebook

This happened in extra time of the Seattle Sounders game last night against the Portland Timbers in the U.S. Open Cup. The referee had already given two members of the Sounders red cards. After the second card is given, Clint Dempsey appears to take the referee’s notebook out of his pocket and throw it. When it doesn’t go very far, he picks it up and tears it in pieces while getting carded himself. Seattle finished the game with seven men as they lost the game 3-1 after the teams were tied at the 90 minute mark.