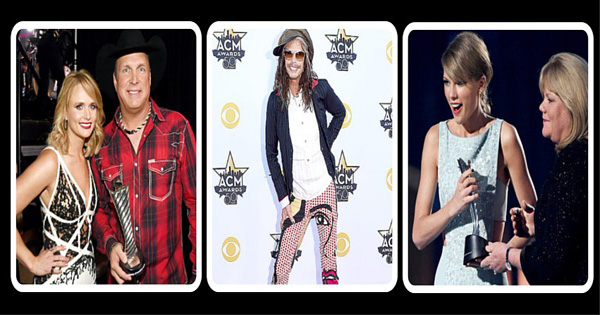 The 2015 Academy of Country Music Awards took place last night at AT&T Stadium in Dallas, Texas. The 50th annual edition of the show was filled typical glitz and glamour, hit and miss performances, a mother’s touching speech about her daughter, some mind-boggling decisions and more.

The “awards” at many of these shows have become somewhat of a joke. The biggest joke of the 2015 ACM Awards was Luke Bryan winning Entertainer of the Year. The award was given by popular vote of the fans so right there you know it is a little suspect. I don’t care what the vote actually was here. There is no way in hell anyone but Garth Brooks should have won this award. Garth recently played the 100th show on his comeback tour and it’s estimated he has sold 2 million tickets on the tour. Giving the award to Luke Bryan is just mind-boggling.

Jason Aldean as Male Vocalist of the Year wasn’t as asinine as a choice, but I still think the award should have gone to one of the other nominees like Dierks Bentley, Eric Church or Luke Bryan. Cole Swindell won New Artist of the Year over Sam Hunt and Thomas Rhett. Again, I’m not really sure how. Thomas Rhett should have won this award. Little Big Town won Vocal Group of the Year.

“Automatic” was co-written by Lambert, Natalie Hemby and Nicolle Galyon. The trio was honored in Nashville last July when the song topped the charts. Nicolle Galyon is one of my favorite contestants ever on NBC’s The Voice. She also recorded this awesome “Super Bass” cover once.

Here’s a full list of winners and nominees from the 2015 ACM Awards.

The Performances From The 2015 ACM Awards

Lee Brice also performed the Randy Travis hit “Forever and Ever, Amen”. After the song, he introduced Travis, who was in the audience. Randy Travis tragically suffered a stroke in 2013 and is unable to speak. The legend posted a letter to his fans on his website after the event.

Nick Jonas also took the stage with Dan + Shay for a performance. I have no clue why the people putting this show together thought people wanted this.

Billboard broke down each of the performances at the 2015 ACM Awards.

There were also several other performances by the likes of Reba McEntire, Sam Hunt, Thomas Rhett and others where good videos of the performances weren’t made available online. Kelly Clarkson introduced Reba by informing everyone she has the coolest mother-in-law ever. Clarkson is married to Brandon Blackstock, who is Reba’s stepson.

On April 19, 1995 a truck bomb exploded at the Alfred P. Murrah Federal Building in Oklahoma City, Oklahoma. The explosion killed 168 people and injured hundreds and at the time was the worst terrorist attack ever in America. With yesterday being the 20th anniversary of the attack, the ACM Awards attempted to pay tribute to those lives lost with an Alan Jackson performance of “Where Were You When The World Stopped Turning”. The performance was moving and even I thought during the performance “this is everything this event should be’. Then, I was reminded that the song is about the events of September 11, 2001. It was probably the most mind-boggling decision of the whole show. Maybe the people in charge of the show forgot that Oklahoma native Garth Brooks sang a song that is actually about the Oklahoma City bombing? Here’s ‘The Change”.

Taylor Swifts’s mother Andrea Finlay, who was recently diagnosed with cancer,  introduced her daughter as the recipient of the 2015 Milestone Award with this very moving speech. The announcement that Taylor would receive this award was largely seen as country music saying goodbye to Taylor Swift. Taylor’s acceptance speech did said goodbye to country music.

Reba McEntire, Kenny Chesney and George Strait also received Milestone Awards. I say that in this footnote after the T-Swizzle video because that’s basically how they were treated. 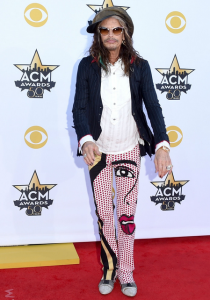 The fashion choices by the stars always make big “news” at an awards show. Miranda Lambert appeared in four different outfits and they were pretty all over the board. Taste Of Country put together a nice slideshow of the worst-dressed people at the 2015 ACM Awards. Like Nick Jonas, I don’t know who thought people wanted to see Steven Tyler at the show, but hopefully next time they turn him away at the door if he looks like this again.

Thomas Rhett could have gone without the bowtie but otherwise looked pretty dapper on the red carpet. Tyler Hubbard of Florida Georgia Line predictably left too many buttons unbuttoned. Hunter Hayes was pretty darn stylish.