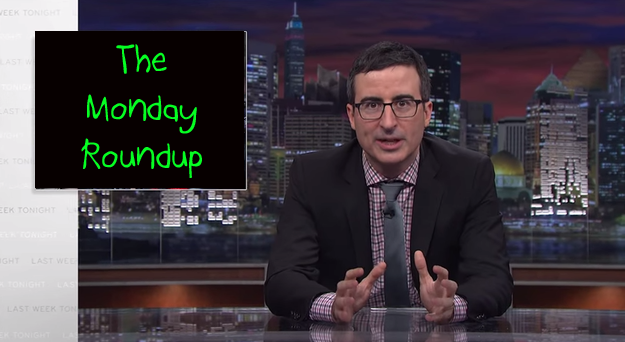 Last Week Tonight with John Oliver is not back on television yet, but John Oliver has released a web exclusive video featuring his take on New Year’s Eve. Oliver compares the “holiday” to the death of a pet, warns that no one should ever spend NYE in a strip club and gives you other tips to get out of something you will regret.

The St. Louis Rams ended the 2014 campaign with a 6-10 record as they fell 20-6 to the Seattle Seahawks in Seattle yesterday. The game was tied 6-6 heading into the fourth quarter before the wheels fell off for St. Louis. Shaun Hill three an interception to open the quarter, which led to a Marshawn Lynch touchdown on the next drive. Seattle’s Bruce Irvin then picked off a Hill pass with 12:07 remaining in the game that he returned for a 49-yard touchdown.

Shaun Hill completed 26 of 37 passes on the day for 243 years, 0 touchdowns and 2 interceptions. The Rams’ defense played well for most of the day. They sacked Russell Wilson three times and held Marshawn Lynch to 60 yards rushing on the day. Seattle finished the season with six straight wins and won their third NFC West division title under coach Pete Carroll. They went 5-1 in the division with their only loss being to the Rams on October 19 in St. Louis.

The Rams will pick 10th overall in the 2015 draft. A mock draft put together back on December 17th by ESPN’s Todd McShay had the Rams picking Miami’s Ereck Flowers, an offensive tackle at 12th overall. According to that mock draft, Iowa’s Brandon Scerff, another offensive tackle, would be available for the Rams at 10th overall. A Sports Illustrated mock draft put out today has the Tampa Bay Buccaneers picking Marcus Mariota first overall to be their quarterback of the future. SI has the Rams picking Florida State quarterback Jameis Winston with the 10th overall pick. That would be one heck of a controversial pick. Winston certainly has the talent, but does he have his head on straight?

And just because, here’s Russell Wilson dancing with his Grandma on Christmas.

Boston, Los Angeles, San Francisco and Washington, D.C. all want to host the 2024 Olympics. They each think they can do it for $4-$5 billion dollars. Deadspin points out that London spent $10.4 billion when they hosted.

Facebook Apologizes To Users Offended By “Year In Review”

If you’re on Facebook you have seen the “Year In Review” thing that is popping up on people’s pages. It’s an app that uses an algorithm to pick out a user’s top posts and pictures to give them a snapshot of their 2014 on Facebook. One user tragically lost his daughter earlier this year. He was upset when a post popped up on his Facebook timeline offering to let him preview his “Year In Review”. The Facebook product manager in charge of the app apologized to users that were offended. He also vaguely apologized for their inability to think.

There really isn’t much else to say other than this is a video of Stephie the goat eating peanut butter off a spoon and loving it.

The Interview Makes $15 Million In Online Sales, Gets Stolen A Lot

The controversial new film starring James Franco and Seth Rogen was released online over the Christmas holiday while it was also shown in about 300 theaters nationwide. It saw about 2 million purchases or rentals after it was made available on December 24th. It also was pirated about 1.5 million times. While this was all kind of haphazardly thrown together, someone apparently neglected to protect the files when someone rented the film. The Verge pointed out that it was pretty easy to share the link to the rental you purchased with anyone. Someone could also just right-click and save a copy of the move from the link. The film is now available on Apple’s iTunes store as well, presumably with some safeguards in place to keep people from seeing it for free.

I saw the movie legally on Christmas and thought it was pretty good. It’s not a classic piece of film work. It’s crude and pretty much exactly what you thought it would be. There are laughs to be had and the opening scene with Eminem is really funny.

Amazon claims that 10 million new customers tried Amazon Prime over the holidays. Prime is Amazon’s $99-a-year program that gets you free 2-day shipping on your purchases as well as access to their library of music, movies and television shows. 60 percent of those customers ordered an item on a smartphone or tablet. On Cyber Monday, the Monday after Thanksgiving, the company reported selling an average of 18 toys per second. The Amazon Fire TV and Stick were both big sellers over the holidays. Here are 5 tips and tricks to get the most out of your new Amazon Fire TV.