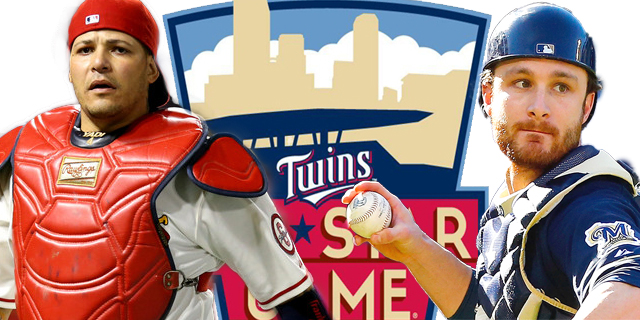 **UPDATE** Don’t expect a response out of Cardinal Nation to the Brewers. In an article posted on MLB.com by Jenifer Langosch and Adam McCalvy, Cardinals manager Mike Matheny said “not something I’m interested in. It’s an easy no” when asked about a rebuttal. St. Louis Mayor Francis Slay did respond, however. He invited Milwaukee Mayor Tom Barrett to come watch a Cardinals game with him when the Brewers come to St. Louis in August. He thinks they can compare cities, beers and most importantly, catchers.

Last night Deadspin posted this epic spot the Milwaukee Brewers filmed to promote their catcher, Jonathan Lucroy, for the All-Star Game. The spot spoofs your typical political commercial and asks “Do you want another St. Louis Cardinal starting in the All-Star Game?” Check it out.

The BFIB portion of Cardinal Nation apparently can’t take a joke and is outraged by this. Actual quote from the comment section of a local radio station’s Facebook page: “What horrible sportsmanship!” What is this BFIB crowd I speak of? It’s the segment of the Cardinals fan base not exactly based in reality. “BFIB” stands for “Best Fans In Baseball” of course. This segment of the fan base takes that tag to a whole other level. They’re the folks who vote multiple times a day for an all-Cardinal starting lineup in All-Star Games. They’re the adults who stood in line at the new QuikTrip in Maplewood recently not for free stuff, but to meet Fredbird. They’re the kind that if Fredbird asked them to drink some shady-looking Kool-Aid, they would drink it, no questions asked. Local media folks who haven’t sold their souls to the devil like to poke fun at this group. Several local media outlets cater to and are every bit a part of the BFIB crowd. These folks likely started salivating as soon as they saw the Brewers’ video. Here are a couple of the better posts from their Facebook pages this morning.
Post by 92.3 WIL.
Post by Fox2Now.

In comparing this season’s stats, Lucroy is having an All-Star-worthy season. He’s hitting .340 with 8 Home Runs and 37 RBIs. He hit a Grand Slam and a solo homer last night in a Brewers win. Yadier Molina is batting .283 with 6 Home Runs and 26 RBIs. In terms on batting averages, Lucroy is first in the National League among catchers and Molina is second. A catcher’s true worth is of course measured behind the plate. Molina and Lucroy are tied atop the NL with identical .996 fielding percentages. Molina has caught 13 of the 29 players that have attempted to steal on him. Lucroy has caught 12 of 42. Molina has caught 537 innings behind the plate and Lucroy has caught 535.1. Molina has accounted for 471 Cardinal outs whereas Lucroy has accounted for 447 in Milwaukee. The Milwaukee Brewers are 43-29 with a 3.5 game lead on the Cardinals (39-32) in the National League Central. If fans voted purely based on statistics, then it would be a toss-up between these two on who gets to start the All-Star Game for the National League on July 15 in Minnesota. Unfortunately, Major League Baseball has made a mockery of the voting process. Each fan can submit up to 25 online ballots through the MLB website and can submit an additional 10 in they have an MLB.com account. Since you only have to put in your email address and birth date to register, fans basically have an infinite amount of votes if they really wanted to use multiple email addresses to vote. Fans can also vote via in-stadium ballots and can pretty much fill out an infinite amount of those if they wanted. In the American Leauge right now, Matt Wieters of  the Baltimore Orioles is the leading vote-getter at catcher. He hasn’t played since May 10 and is out for the rest of the season after only playing 26 games. Brian McCann of the New York Yankees is in second place despite his .623 OPS. (In his defense, he does have a .998 fielding percentage) In comparison, Derek Norris of the Oakland A’s has a .949 OPS and Salvador Perez of the division-leading Kansas City Royals has played excellent this season behind the plate with a .994 fielding percentage. He also has a .773 OPS. MLB released the latest update on All-Star Game voting last Sunday. Yadier Molina is the current leading at catcher with just over 2 million votes. Buster Posey of the San Francisco Giants is second with 1.4 million and Jonathan Lucroy is third with 1.14 million votes.  Molina and Troy Tulowitzki of the Colorado Rockies are the only NLers to pass the 2 million vote mark. Yasiel Puig of the Los Angeles Dodgers should pass the mark soon. Miguel Cabrera of the Detroit Tigers, Jose Bautista of the Toronto Blue Jays and Mike Trout of the Anaheim Angels have all passed 2 million in the American League. Bautista is the MLB leading vote-getter thus far with 2.9 million. In looking at other St. Louis Cardinals on the ballot, Matt Carpenter and Matt Holliday are the only ones listed in the latest MLB update. Carpenter is currently 5th at third base with just shy of 700,000 votes. Holliday is 11th among outfielders with about 10,000 fewer votes than Carpenter. Yadier Molina responded to Jonathan Lucroy and the Milwaukee Brewers last night after the Cardinals’ 5-2 win over the New York Mets with this tweet.

For a good discussion on this “controversy”, listen to this audio from The Morning After show this morning. It’s segment three. It was mentioned on the show that Fox Sports Midwest is producing a “rebuttal” to the Brewers that should be ready in time to air soon. I will post that here and on Facebook when it’s available.   Mills Properties