The 2014 CMT Music Awards were held last night at the Bridgestone Arena in downtown Nashville. In fact, everything country music is happening in Nashville this week. The 2014 CMA Music Festival officially opens today, but has had concerts and events around Nashville since Monday.

Kristen Bell hosted the event for the third time,although solo for the first time. That led to a pretty funny sequence introducing Princess Anna, complete with Tinder references.

ZZ Top, Florida Georgia Line, Jason Derulo teamed up for a medley performance to open the evening. I could have done without them singing “This Is How We Roll” because I think it is quite possibly one of the worst country songs ever recorded. Seeing everyone singing and dancing to “Talk Dirty To Me” was pretty entertaining, however.

Speaking of non-country songs performed. The performance of “All of Me” was also quite interesting. This rendition featured John Legend and Jennifer Nettles, kinda-sorta of Sugarland, singing while Hunter Hayes played the guitar. I’ve liked Jennifer Nettles’ voice on Sugarland songs, but I just don’t see her making it as a solo artist.

Not all of the performances happened on the show’s stage. Keith Urban performed his hit “Cop Car” from the stage at the legendary Bluebird Cafe in Nashville..oh wait, no he didn’t. Halfway through the song the walls are pulled away and HE”S ACTUALLY IN THE MIDDLE OF THE CROWD. It would have been cooler if he was actually at the Bluebird.

Jake Owen sang his new song “Beachin'” outside the Bridgestone Arena in downtown Nashville. Only females were allowed anywhere near the stage apparently.

For some unknown reason, I guess it was a shallow field, Collaborative Video of the Year was given to FGL and Luke Bryan for their terrible song “This Is How We Roll”. Seriously, one line of the lyrics reads “shootin’ bullets at the moon”.  Any song that advocates that idiotic move doesn’t deserve radio play plus, it’s just terrible.

Know what is a good song? “Living on Love”, originally performed by Alan Jackson.

Lee Ann Womack and Kacey Musgraves performed it and it was great.

In one of the coolest and surprising performances of the night, Eric Church and Lizzy Hale rocked a new song “That’s Damn Rock & Roll”. Who is Lizzy Hale? She’s the lead singer for Halestorm, a hard-rock band with her brother Arejay.

The fashions are the highlight of any good awards show and the CMT Music Awards are no different. Here’s a gallery from the red carpet and backstage. Here’s another set of photos. 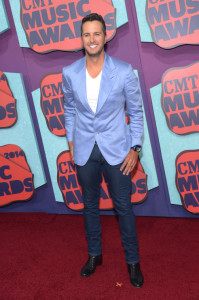 Jason Aldean decided to go with the hole-in-the-jeans looks where his date, Brittany Kerr looked great 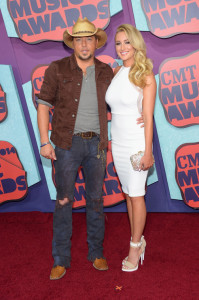