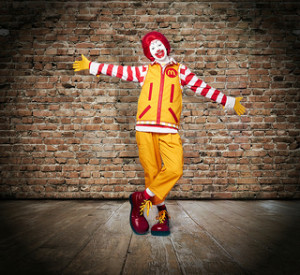 Yesterday morning I sat on my couch and watched the news, which is a rare occurrence for me. While I was only half awake, one story caught my attention, not because it was shocking, tragic, or life changing, but because it was…weird. It was Ronald McDonald’s new makeover.  My train of thought was as follows:

“Oh, I totally forgot about him!”

“And why is that national news? I’m confused.”

“Time out, why is McDonald’s mascot a clown? That scares me.”

While I still don’t understand what a clown has to do with cheeseburgers, or why he needs a makeover, I did figure out the difference between his old and new outfits. His old outfit consisted of a mustard yellow jumper with over-sized sneakers. His NEW outfit consists of a mustard yellow…two piece cargo vest and pants set. With the same over-sized sneakers? I honestly didn’t think the outfits looked that different until *drumroll please* I saw his new jacket. That’s right, a ketchup red jacket he’s never had before! 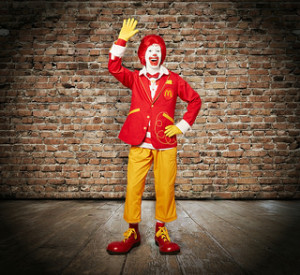 I know I sound like a hater, and I apologize to anyone with a sentimental attachment to the clown. Don’t get me wrong, I love me some McDonald’s! I just find clowns excessively creepy. But hey, if Ronald McDonald brings joy, represents happiness, and promotes goodness, I’m alright with it!

Personally, I think Mickey D’s wanted to generate some buzz to compete with all the Taco Bell Breakfast talk going on lately. What’s the real message here? Don’t mess with the McGriddle. Jack in the Box suggested Ronald was going through a “McLife Crisis,” which could also be a valid reason for the change.

What do YOU think about Ronald’s new look? Cool? Creepy? Hipster? I have to admit, it’s better than it used to be (that, my friends, is terrifying).

In the press release, McDonald’s announced that Ronald would take “an active role on McDonald’s social media channels.” If you have an opinion about Ronald’s new look, go tweet about him and include the #RonaldMcDonald hashtag.