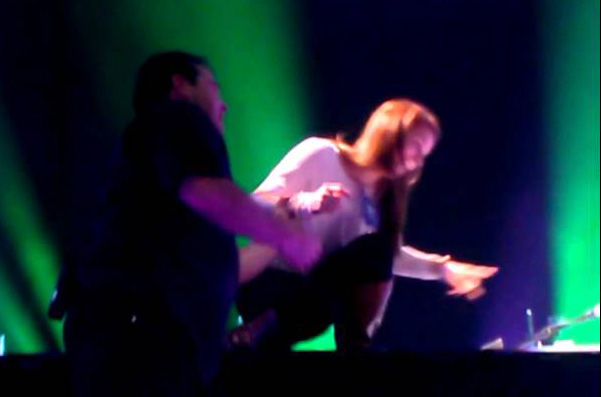 I first included video of the girl dancing on Billy Joel’s piano at his St. Louis show in our Monday Roundup post earlier this week. I  heard about the video from Tim McKernan on The Ryan Kelley Morning After radio show Monday morning. Yesterday we were contacted by the girl who did the dancing, apparently.

Today Kate, as we will call her, got back to us with the story of who she is and what exactly happened between her and Billy. I won’t use her real name because if word got back to her work about how awesome she is, they might start, like putting excessive amounts of pressure on her to do awesome things on a regular basis.

She’s about to graduate from the University of Missouri- St. Louis with a degree in Economics & Finance so that sounds stressful enough.

First off, Kate was not drunk at the show as most people, including me, assumed.

Second, she kind of did it as a tribute to her late mother. How can you argue with that?

Here’s the story in her own words.

How’d you end up so close to the stage?

The story of how I ended up that close to the stage is pretty much the best story of it all. I originally purchased tickets pretty far back but was excited to surprise my boyfriend with the concert. We got there as Gavin Degraw was playing. My boyfriend went to the bathroom and I waited outside. Two guys approached me and starting talking to me about the concert. I assumed they worked for Scottrade, but never really asked. We talked for a couple of minutes until my boyfriend came out. I walked over to him not really worrying about the guys that had been talking to me. They walked right over to us and I could tell by the look on my boyfriend’s face that he was thinking, “Oh God, what does these guys want”. They basically told us just because they thought I was “awesome and fun to talk to” they were going to upgrade our seats….to front row! Not just close to front, but smack dab dead center stage, very first row. I immediately hugged them and started freaking out. They said Billy Joel doesn’t put his first row for sale (and hasn’t for 30 years) and has them go up to people that already bought tickets and upgrade them to front row. BJ didn’t want just the rich people to experience his concert up close–he calls them “Santa seats”. Basically from that point on I was in shock and on cloud 9. That’s probably why I did what I did.

Did you plan all along to do that or was is spur of the moment?

It definitely was not a planned thing. I said something about half way through that if “Billy plays my favorite song, I’m gonna get up on stage”. But my boyfriend didn’t believe me nor did I even believe myself. He had been playing more of his “underground” stuff and nothing too commercial so I didn’t even think he’d play it. “Only the good die young” is my favorite song for a couple of reasons. My mom was absolutely in love with Billy Joel and he was someone I grew up listening to. That song was one of her particular favorites, although she had many. I remember hearing that song for the first time since she had passed away and instantly feeling my moms spirit (I know that’s a little weird, whatever). So when he played the intro, I said, “I’m getting up there”. But instead of on the stage, I meant the piano. (Side note: Billy Joel used to dance on his own piano and once or twice on Elton John’s piano). Within seconds of saying that, I was asking for help to get up there and then my mind kind of went blank. Thank God, because I would have immediately jumped down had I actually thought it through.

Are you banned from Scottrade?

I am not banned from Scottrade but did get a trespassing ticket. Billy Joel didn’t press charges though.

Did your buddy Billy say anything to you while you were up there?

He didn’t say anything, he was mid-song and didn’t even miss a note! He looked absolutely shocked and his eyes got huge. He was smiling as he was singing though.

How did security treat you?

Security wasn’t bad. A couple said they thought it was awesome and a couple were a little more annoyed with me. Luckily it was the last song, so they let me go after about 20 minutes. My boyfriend said a few people were standing around outside yelling “free piano girl”, which I thought was pretty funny. I think they assumed I was drunk. When they figured out that I wasn’t, they let me go.

Didn’t see the video yet? Here are all the videos I could find of the dancing we speak of.

This Weekend in St. Louis Ryan 886 days ago.