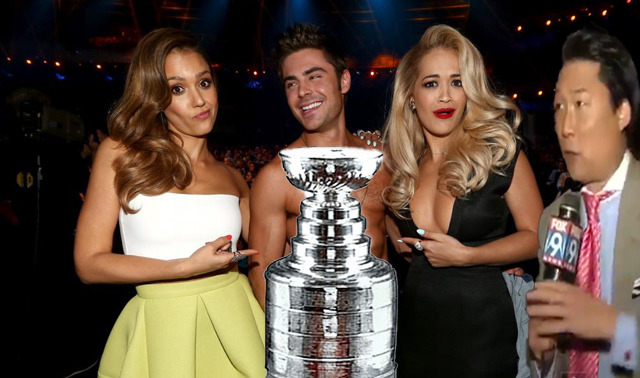 This was talked about on The Ryan Kelley Morning After this morning on CBS 920 AM. At 4:43 of the video the woman jumps on the stage.

The St. Louis Blues finished their season yesterday with a 3-0 loss to the Detroit Red Wings. The loss meant the Blues finished the season with a 52-23-7 record and 111 points. The record was good enough for 4th overall in the league and third overall in the Western Conference. The team finished the season losing six games in a row as injuries hit them hard. The final regular season game saw the team missing eight regular players. The club will hopefully at least get David Backes and T.J. Oshie back in time for Thursday night’s game one in St. Louis.

The Blues and Blackhawks will be meeting in the playoffs for the first time since 2002. The Best-of-Seven series will start Thursday at Scottrade Center. Blues players will be getting a much-needed extra day of rest due to Miley Cyrus performing Wednesday night at Scottrade.

Competition was supposed to take place last night, but due to the weather, that plan was scrapped. Things will instead get going at 5 pm today downtown. KSDK has a look at the obstacle course.

Michael Phelps comes out of retirement

22 Olympic medals isn’t enough for Michael Phelps. He’ll pull a Michael Jordan and come out of retirment to swim three events at a swimming meet in Arizona later this month. It’s not for sure that he will attempt to swim at the 2016 Summer Olympics in Rio but this is a possible step towards that. Phelps is 29 years old.

Hunger Games took home the Golden Popcorn award for Best Movie while its stars Jennifer Lawrence and Josh Hutcherson each won awards of their own for their performance. Jonah Hill presented Channing Tatum with the MTV Trailblzer Award and no one really knew what it was for. Zac Efron won Best Shirtless Performance for That Awkward Moment and then of course had his shirt taken off for him. Efron brought his Social Media Manager LaQuishe Wright with him to the show. Here’s a profile on her that the Los Angeles Times did on her last year.

Will Poulter won an award for his performance in We’re The Millers and also was part of the Best Kiss in that movie along with Jennifer Aniston and Emma Roberts.

Teemu Selanne is honored in his last Regular Season game

Selanne played his final reagular season game in the NHL last night in Anaheim. It was his 1,451st game. The Anaheim Ducks still have the playoffs to go, but the team took the opportunity last night to honor Teemu. He was given the captain’s “C” for the game and was named stars 1,2 and 3 for the game.

When Selanne was honored after the game, he took a lap around the ice with Jean-Sebastien Giguere, the Colorado Avalanche backup goaltender, who was likely playing his last regular season game as well. The two were teammates in Anaheim together for awhile and won a Stanley Cup together in 2007. Giguere is the last active player remaining that played for the Hartford Whalers. He played with this in the 1996-97 season as a 19-year old rookie.

Selanne exploded onto the NHL scene during the 1992-93 season when he scored 76 goals as a rookie for the Winnipeg Jets.

Martin Brodeur won his 688th game as a New Jersey Devil. He has likely played his last game as a Devil, although he isn’t necessarily ready to be done playing. Brodeur has never played for another NHL club. He’s played 1,259 games for the Devils dating back to the 1991-92 season.

U.S. Navy figures out how to make fuel from seawater

This fancy process pulls hydrogen and carbon from the seawater and combines them to make fuel. The U.S. Naval Research Laboratory said in a press release that they’ve flown a model aircraft using fuel made from the sea.

The process isn’t ready for mass production yet but it is pretty awesome.

Girl arrested in the Netherlands over tweet to American Airlines

A 14-year old Dutch girl sent an incredibly dumb tweet to American Airlines yesterday pretending to be a member of “Al Qaida”. In the tweet she implied that she would “do something really big” on June 1. She was arrested in her home city of Rotterdam.

In other airplane news, a Southwest Airlines flight today had to make an emergency landing when an unruly passenger apparently tried exiting the plane while it was in the air. Other passengers tackled him.

And in more of a “feel-good” story, this Southwest flight attendant is pretty funny.

Former Missouri Tiger and current San Francisco 49er Aldon Smith apparently was singled out by TSA agents for a “random” extra security check at the Los Angeles airport yesterday. He responded with an off-hand comment that included the word “bomb” and pretty much punched his ticket to jail. TMZ was there when he was released from jail and of course Aldon doesn’t look happy.

KMSP, a Minneapolis Fox affiliate, sent a reporter out on the streets to get some crowd reactions after the University of Minnesota lost the NCAA Championship hockey game to Union College. This reporter is not a happy camper when “idiots” keep interrupting his crowd shots. Maybe he doesn’t understand that those “idiots” are the whole reason he is there in the first place? What did he think was going to happen? (H/T Deadspin)

The St. Louis Board of Alderman today gave final approval to a bill that will allow ICM partners to stage two huge music festivals in downtown St. Louis. One will feature country music over Memorial Day weekend and the other will feature rock music over Labor Day weekend. The concerts will reportedly start next year.

Summer Rocks concert bill given final passage by #STL aldermen by vote of 21-4.

Captain America: The Winter Soldier again topped the box office over the weekend. The sequel brought in another $1.4 million to increases its domestic total to $159 million. With 66.6% of its receipts coming from overseas markets, the film has now brought in $477 million worldwide. Rio 2 opened in second place with $39 million and Oculus opened in third with $12 million. Draft Day came in fourth with $9.75 million and Divergent rounded out the top five with $7.5 million. When the final numbers are released Noah may take over the fifth spot. It currently stands at $7.45 million. God’s Not Dead stayed strong with $5.5 million to bring its box office take to almost $41 million on a $2 million budget.

We’ll have a closer look at the numbers on Thursday in our Weekend Movie Guide.