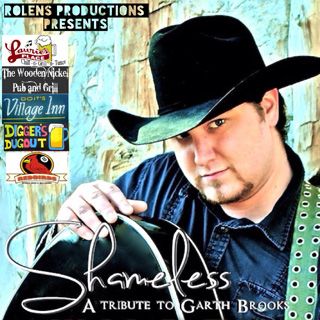 Seeing Garth Brooks live in concert is on the bucket list of every country music fan. The country music megastar has only done shows sporadically since 2000 other than his run of intimate Las Vegas shows. He’ll go on a World Tour later this year, but no dates have been announced in the United States. On May 2nd, Garth won’t be playing at the Wildey Theatre in Edwardsville, Illinois but his music will be on display.

St. Louis native Nathan Aaron Orr will handle the lead singing duties at Shameless: A Tribute to Garth Brooks.  The show will start at 8 pm on May 2nd. Tickets are $20. Tim Campbell will open the show.

Orr has also seen moderate success on a solo level. He is a previous area winner of the  Texaco (then Colgate) Country Showdown. Some of the biggest names in country music competed in that contest before they became famous such as Garth Brooks, Brad Paisley and Sara Evans. Nathan makes frequent songwriting trips to Nashville as well as singing with the Rough Ryders. You can hear many of his originals on SoundClick. “Like To Know”, “Country Girl” and “Fairytale” are particular favorites of mine.

I caught up with Nathan recently to talk about the upcoming Garth Brooks tribute show as well as his music career.

What gave you the idea to do the show?

The idea for the Garth Brooks tribute show, Shameless, arose back in 2013 when the band and I were rehearsing for the Rascal Flatts tribute show. Bobby Rolens, Founder of Rolens Productions, was checking his acoustic guitar and played the introduction to the song “If Tomorrow Never Comes” by Garth Brooks. Eventually the whole band caught on and we ended up playing the whole song. When we finished, Bobby’s wife Susan Rolens said, “You guys should do a Garth Brooks tribute!”

Who do you have playing with you in your band?

The band consists of seven members. Bobby Rolens plays the acoustic guitar, fiddle, harmonica and mandolin. He has toured the with country music superstar Gretchen Wilson. Larry Rolens plays the steel guitar. He has toured with The Bellamy Brothers. Both Bobby and Larry Rolens were in the local classic rock band Baywolfe prior to going on tour. Also from the band Baywolfe, Craig Varble plays the bass guitar and does backing vocals. Garry Schiera will be playing keyboard. He has previously toured with country superstars Josh Gracin, Trace Adkins, and Bryan White. Jennifer Leann Thompson, who has played with local country group The Glendale Riders Band, sings back up and lead vocals. Jamie Johns plays lead guitar. He currently plays for the country cover band The Rough Ryders. Jaylon Rolens, son of Bobby Rolens, will be playing drums. He also plays for the band The Rough Ryders.

How did you recruit them?

While playing in The Rough Ryders for seven years, I have met several talented musicians through mutual friends. Through one of those contacts, The Rough Ryders ended up hiring drummer Jaylon Rolens who is the son of Bobby Rolens. Jaylon and his dad also played in the Alan Jackson tribute with Tim Campbell and The Chattahoochee Band. One night at a gig, I mentioned to Jay that I had thoughts of doing a Rascal Flatts tribute. Jay passed on the word to Bobby and the rest is history.

My favorite Garth song to sing would have to be “Shameless.” There is something about the passion in the music and lyrics that pull me out of reality for three and a half minutes. I can remember The Rough Ryders played it at The Bull Float Trip several years ago. When I sang the last line, the music ended abruptly and the roar from the crowd was unbelievably loud and rewarding. It immediately hit me like a bolt of lightning. I remember asking myself, “What just happened?” It was truly an amazing and unforgettable feeling.

The hardest Garth song to sing would have to be “Ain’t Going Down” (‘Till the Sun Comes Up). It’s a simple fact that song can be a tongue twister. Just by getting one word wrong you can get lost in the song or run out of breath.

Are there any other tribute shows you’d like to do?

I think doing Garth Brooks and Rascal Flatts tributes are good enough for now. Maybe in the future there might be discussion of a classic rock tribute show. Even though no particular artist comes to mind, the players in this band are very talented and versatile. I’d like to think the options are limitless.

You’ve been writing in Nashville, how’s that going?

Well I’ve co-written songs with several different songwriters, and produced demos for fellow songwriters as well. I’m just stock piling songs and plugging away. There is a song out now that I co-wrote with Indie artist Matt Snook and it’s called “Hillbilly Dream.” You can download in on iTunes from his (Perfect Sense) EP.

Here’s a video of Nathan performing “Shameless” in Nashville before a Garth Brooks concert back in 2011.


Tickets to Shameless: A Tribute to Garth Brooks are available online through the Wildey Theatre website.