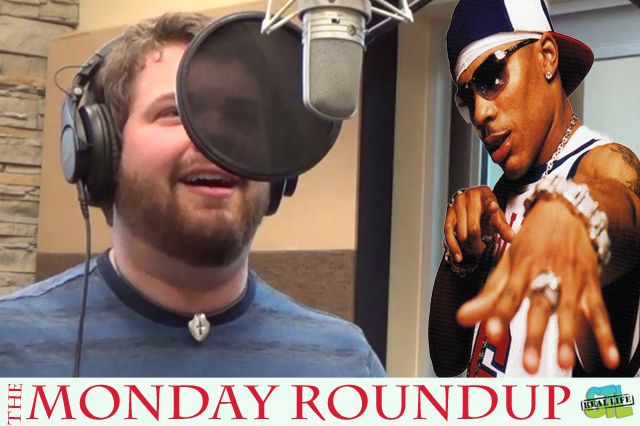 Fashion Designer L’ Wren Scott was found dead inside her Manhattan apartment this morning. The death is being viewed as a suicide. Scott was the longtime girlfriend of Mick Jagger, frontman of the Rolling Stones.

A 4.4 magnitude earthquake hit LA this morning. It happened around 6:30 am and no injuries have been reported. Here’s video of one news show that was live when is happened and both anchors were a little rattled.

The radio station in Los Angeles holding down the 105.7 point on the dial is changing formats and to celebrate they played Nelly’s “Hot In Herre” at 3pm on Friday. After that, they kept playing it for more than 24 straight hours. The stunt lit up the Twitter world for its awesomeness. Nelly released “Hot In Herre” on April 16, 2002. It was the first single from his Nellyville album. They put up this Facebook post when the song first played.

Nelly and Florida Georgia Line to tour this summer

Speaking of Nelly, he will be touring with country duo Florida Georgia Line this summer. The tour will take them to smaller baseball stadiums mostly in the South. No St. Louis area dates have been announced. FGL is opening for Jason Aldean this summer on his ‘Burn It Down’ tour so the dates for this tour, the ‘This Is How We Roll Summer Series’, will be in between those dates. Chris Lane will also be on the tour.

The people of Crimea appartently came out in droves over the weekend and voted to leave Ukraine and become part of Russia. Election officials said that they had an 83% turnout and 96% of those people voted in favor of Russia. There are thousands of Russian  soldiers in the area and an large percentage of the population is Russian. The interim prime minister of Ukraine and President Obama are among those not taking the vote seriously. President Obama and others are threatening Russia with sanctions. A ceasefire has been agreed to in Crimea until March 21 by the Russians.

Tyler, The Creator gets arrested for being an asshole

The rapper was playing a show at the SXSW music festival and encouraged fans to shove their way past security personnel who were trying to keep things in order. He was arrested at the airport as he tried to leave town on charges of inciting a riot.

The jet has been missing since very early on March 8. New reports says that a tracking device went dead shortly before the pilot last spoke to officials. He didn’t mentioned anything was wrong, which has led to speculation that he may have been involved in criminal activity that took the plane off course. While the pilot appears to have been an anti-government proponent, his friends are adamant that he would never put the plane’s passengers in danger. This and other new information means that officials really have no clue where the hell the jet is. New York Magazine wrote this piece about why the jet’s disappearance is getting so much attention. Considering there are 634 runways in the area that the plane could have landed on, there is a possibility it landed somewhere rather than crashed. There’s a  report that Israel is preparing for the remote possibility that the plane was hijacked and taken to a secret location in preparation for a terrorist attack.

The 68 teams were picked Sunday for the NCAA Tournament. The First Four games will take place on Tuesday and Wednesday of this week with the tourney really getting going on Thursday. Florida, Wichita State, Virginia and Arizona took the four top seeds. The Saint Louis University Billikens earned a #5 seed and will take on the winner of North Carolina State and Xavier in Orlando. Those two teams plays Tuesday in a First Four game before the winner gets the Billikens on Thursday. Scottrade Center will play host to games in the second and third rounds. Wichita State, Kentucky, Kansas and Kansas State are among the teams that will play in St. Louis. Missouri and Illinois will both play in the NIT. Here’s a printable bracket. Warren Buffett is partnering with Quicken Loans to offer $1 billion to the person who correctly predicts the winner of every tournament game, which is pretty darn impossible. If you takes Slate‘s advice and don’t enter then you have no chance at winning at all.

The founder of Wesboro Baptist Church is on his deathbed according to his estranged son. The elder Phelps was  apparently voted out the church back in August. Nathan Phelps posted the news on his Facebook page.

Comedian Ari Teman rented out his Manhattan apartment on Airbnb. He happened to stop back by his apartment a little while after giving the keys to the man who rented the place. He then found out that the man was planning on having some sort of weird sex party. There was already damage to his apartment by the time he saw it. Airbnb was ridiculously quick at making things right.

He sang the song not in his own voice but in the voices of multiple Disney and Pixar characters. Seth O’Neal produced the video and it’s awesome