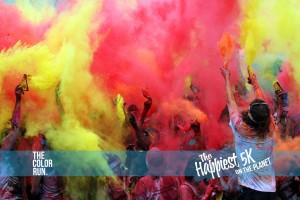 If you’ve lived in St. Louis for at least a year, then you’ve probably heard about this run. It began in 2012 and just exploded (no pun intended). It is known as the “Happiest 5K on the Planet” and I agree 100%. When it came to St. Louis last year in August, I was lucky to have the opportunity to participate. My friends at The Laurel Apartments created a team. As a non-runner…ok non-exerciser, I really generally don’t get excited about these running events that come through St. Louis, but for some reason this just looked too good to pass up. So I joined the team and my wonderful friend Jessica promised not to leave me in the color dust if I started to lag behind. 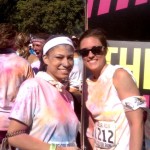 It was probably the coolest thing I’ve ever done, well, besides sky diving. I have done a couple of other runs in St. Louis – the Challenge Nation Scavenger Race and most recently the Komen Race For The Cure…I walked. While both were great fun, there is really nothing that compares to The Color Run. We arrived a little late and were more towards the tail end of the line, so we had to wait awhile to start. Once we started, it was a slow jog to the first color station (because that’s about all you’re gonna get form this girl). We knew we were coming to a color station because instead of seeing clear blue sky ahead, it was a hazy pink, purple, blue, or yellow. Once we got there, it was unreal. 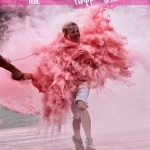 I couldn’t actually see in front of me; we were literally submerged in a cloud of color. Once through we could open our mouths and breathe normally again. And then the fun truly begins. It’s like you get through and you’re looking at each other with pink streaks through your hair, across your cheek, down your leg and you’re like: It’s On! I actually wanted to run to get to the next color. (Keep in mind you certainly don’t have to; many people take their time and walk as well). Running is fun to a certain extent because it creates more sweat, which the color clings to much better. I encourage you to join no matter who you are or what level of exercise you’re comfortable with; you won’t regret the experience. 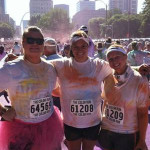 Here are some of my tips for race day:

There happens to be a Living Social deal going on for the next 4 days for a reduced entry fee of $40, which includes your shirt, head band, and color pack. 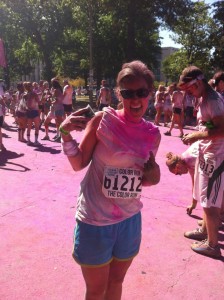 I’m thinking of volunteering this year to help give STL some color. Get ready for the color craziness at the Happiest 5K on the Planet!