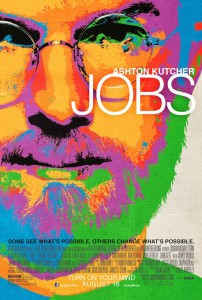 This weekend brings us the opening of one movie that one of the stars refused to promote and another movie where the star seems to be channeling the subject in his daily life.  Kick-Ass 2 and Jobs both come to the nationwide audience this week on the big screen.

The #1 movie last weekend at the box office was Elysium with just under $30 million in ticket sales. We’re The Millers, Planes and the Percy Jackson sequel also opened last weekend to give the box office a healthy jump from the previous weekend. Those four movies in their first weekend of release combined to bring in $92,860,134. Overall, the box office saw a $15.5% jump to $142 million.

Here are the big movies opening this weekend.

The original Kick-Ass brought in $48 million on a $30 million budget in 2010, which of course meant “sequel” in the eyes of Universal Pictures. The first Kick-Ass was violent and this one ups the ante. Filming ended in November and in December the mass shootings at Sandy Hook Elementary happened. That event of course set off debates across the country on gun control. Jim Carrey decided that in good faith he could not support the movie that he had filmed parts for a month before. Carrey plays Colonel Stars and Stripes, but only briefly in the film. The real star of the film is of course Hit-Girl, played by Chloe Grace Moretz. The 16-year old was not a fan of the stance the 51-year old Carrey took on the film.

Kick-Ass 2 is violent, keep that in mind if you choose to go see it. Keep this quote from writer Mark Miller:

“Like Jim, I’m horrified by real-life violence (even though I’m Scottish), but Kick-Ass 2 isn’t a documentary.”

One of the most anticipated films of the year has a ridiculously small budget of $8.5 million. Considering the films stars Ashton Kutcher as Steve Jobs, I have no clue how those numbers worked out. The film has been garnering quite a bit of early buzz for Kutcher’s portrayal of one of the most important minds of our generation. Kutcher got some criticism from Apple co-founder Steve Wozniak, but it’s worth noting that Wozniak is consulting on the Aaron Sorkin-directed Jobs film. Kutcher gave an inspiring speech recently at the Teen Choice Awards that definitely confirms he was the right man to play Jobs.

Catch It While You Can

This Brad Pitt film recently became his highest-grossing film ever, passing the $500 million mark.  It’s a big movie, with a budget of $170 million, that follows Pitt around the world as he tries to figure out why in the world people are getting sick and turning into zombies. As of this past Tuesday, it was winding down its theater run, playing in just 505 theaters.  Locally it’s still playing at Keller. If you need a good “popcorn movie” this weekend, this is it.

Make It A Movie Night At Home

I saw Olympus Has Fallen last night and was not impressed. White House Down was a much better take on the subject. Instead, I reccomend renting this baseball movie from your local Redbox.

Based on the true story of Jackie Robinson breaking the color barrier, 42 grossed $95 million during its theater run. If you have kids that play sports, it’s a movie you should watch with them.