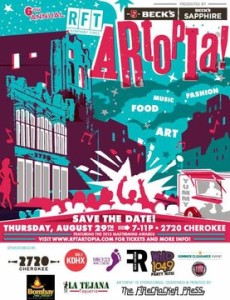 August 29 is a busy day within the St. Louis city limits. The bill was already pretty full with the Jillette Johnson show happening at The Firebird, Jack Dorsey in town for his Let’s Talk series and the Rams playing their final preseason game. Add RFT Artopia to that list. The Riverfront Times presents this “gala celebration of the arts” for the sixth year. The event will take place at 2720 Cherokee from 7-11 p.m.

This annual event is a celebration of all things art in St. Louis.  The RFT will utilize two stories of the building as well as Cherokee Street in front of the building to showcase a wide range of local artists.

Here is just a sample of what the event will entail.

This year there will also be two different fashion shows during the evening. One will feature models clad in attire from local shops Retro 101 and CLR MNSTR Collective. The other will be a lingerie fashion show featuring lingerie from Sugar Magnolia Boutique in Webster Groves.

Artopia is also where the RFT presents its MasterMind Awards every year. Local folks nominate area artists that they think deserve an award, no matter the medium. The judging committee then selects 4 recipients that receive $1,000 checks at Artopia. No strings are attached to the checks, it’s more about recognizing the artists for their contribution to the art scene.

Last year, a MasterMind Award went to Carrie M. Becker, who produced the Barbie Trashes Her Dream House project that went from being a hit on Flickr to being showcased at a shopping mall in China. In 2011, James and Brea McAnally received a check. They are the founders of the Luminary Center for the Arts that is getting ready to move into a beautiful building at 2701-7 Cherokee.

General Admission tickets to the event are $30 and include dessert bites and 3 sponsored drinks with your admission. VIP tickets are also available for $50 and include two extra drinks, a catered lounge and a VIP gift bag on top of the GA ticket.

For a limited-time, discounted GA tickets are available through the RFT’s Daily Deals website. We’ve also got two GA tickets to give away to one lucky reader.

Here’s how to enter: Share this post on Facebook or Twitter. That’s all you have to do. We’ll keep tabs of who all shares it and we’ll pick a winner on Thursday August 22nd. That will give you plenty of time to plan for the August 29th event.

Here’s some video from the 2012 RFT Artopia event: