When I think of Jeremy Genin, I think of Norm Peterson. You know, Norm!…from Cheers. Now if you’ve ever seen Jeremy you’d think, what the heck is she talking about? Jeremy, a muscular man who is well over 6 feet wouldn’t generally lead one to think of Norm, but it’s not his physical appearance I’m speaking of. It’s the idea behind Norm. The guy who walks into the bar (or in Jeremy’s case, pretty much any establishment in St. Louis) and everyone knows his name. 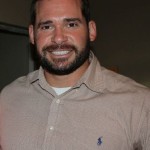 There have been instances where I’ve invited Jeremy to an event and instead of introducing him to the people I’m there with, have watched them say “Hey, Jeremy” as soon as he walks up. In fact, when I went to check out the new location of Functional Fitness STL (which is what this post is all about), we walked down the street to the local grocer, and not only did the people we passed in his building know him by name, both the clerk and a customer in the store did as well. He’s just a very friendly, outgoing and courteous person who makes it easy to get to know. Which is why I’m excited for people to learn about what he’s doing.

Jeremy has been in sports and fitness his whole life. In high school (which for all of you St. Louisans, was Belleville East) he was on the wrestling team, football team and dabbled in fencing. After high school, Jeremy began volunteering as a wrestling coach for the BTHSE Lancers. He then began working with other training programs as well as joining the Mixed Martial Arts field. He began competing full-time professionally in MMA, which he did for a little over 3 years, ultimately causing him to have to give up coaching and training. When he realized he had stopped doing the thing he loved, he went back to it. Describing it with the famous quote: “If you choose a job you love, you’ll never have to work a day in your life” and that’s what he’s been doing since. 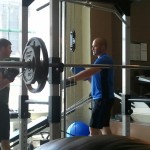 He started his career as a full-time personal trainer about 4 years ago, where he created a small fitness area in his apartment and hosted group runs throughout St. Louis. In January 2012, he purchased a work space in the ArtLoft building on Wash Ave and started Fitness MMA. About 2 months ago, Jeremy changed the name to Functional Fitness STL. The thing is, Jeremy is not only interested in the fitness aspect, he’s also passionate about helping people live an overall healthy lifestyle, including diet and movement patterns. So he wanted a brand that would represent all of that.

Jeremy prides himself on being able to work with everyone. From those trying to get in shape for the first time to MMA athletes training for fights. He understands muscle movement patterns, proper range of motion, and he’s able to make sure that you are not just working out, but doing it safely. He watches your form and helps adjust the way you work out to help you increase stamina, strength, and flexibility. 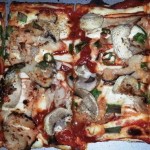 In addition to general fitness, Jeremy also uses his Functional Fitness STL Facebook page to help with diet modifications. He doesn’t expect unrealistic goals from dieting. Instead, he helps find great recipes that are a lower calorie or healthier version but still taste good, such as pizza and chicken satay recipes. He has also begun working with local downtown restaurants such as Blood and Sand, to create healthy recipes that people can make at home, as well as healthy alternatives at restaurants so you don’t have to eat at home every night. Additional projects Jeremy hopes to begin soon are fitness boot camp meet-ups and group runs on the Arch grounds.

At the risk of sounding like a cheesy commercial, I have to say: If you or someone you know is looking to begin a workout program or is interested in learning about overall health and nutrition, or if you’re just someone who needs a trainer to hold you accountable in order to get you to work out regularly and eat properly, then go see Jeremy. He has 14 years of training and fitness under his belt. He’s not just some guy, he’s Norm! He not only has tons of testimonials on his website from people who have trained with him, you could also walk down the street and just ask someone if they know Jeremy and they’ll tell you what a genuine, charismatic and talented person he is. Just Facebook him or e-mail him to set up a meeting or check out his fitness space. Oh and while you’re there, feel free to ask him to sing you a song. In addition to his many talents, he has a great voice and plays piano (just don’t tell him I told you). 🙂 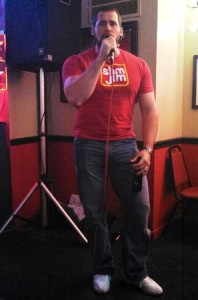