A quote from the Santa Crawl website pretty much sums it all up.

And it is in fact that time of the season again, the time for hundreds of Santas to run…or stumble through the city streets jolly and drunk. And no place does it better than St. Louis. 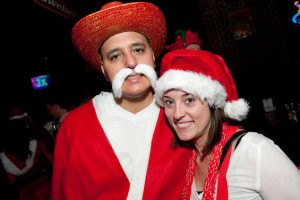 Apparently Soulard knows how to party Santa style because over the years the Santa Crawl has tried venturing out to other locations such as the CWE and Brentwood, but this year it’s full on Soulard, which is great news for me since I live there! No tickets, no busses, just bring yourself, your Santa suit and get ready to party Santa style. The crawl starts at 6:00pm, however the meeting point and bars are still TBD so if you’re interested, RSVP on the Facebook event page to get the updates. 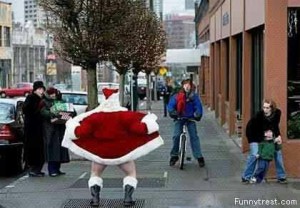 In my opinion, if you’re gonna go all out and get an awesome Santa outfit, you might as well attend every Santa event you can find. However, if you have to pick only one, this one is for sure a good time! I mean, it is the only Santa crawl you’ll find in St. Louis that is part of a worldwide event with it’s own website which also lists the 265 other locations in 37 countries that also participate in this Santa madness! It starts at 5:00pm at Franklin’s at 728 Lafayette. There are also no fees or busses, just come dressed in your best Santa, elf, reindeer, whatever gear and join the hundreds of others for a fantastic night of fun. Here’s the schedule:

*Then stick around Molly’s (if you’re still standing) for the Santacon after-party starting at at 11pm.

Now if you’re not so much into Santa costumes, but still want to participate in some holiday pub crawl fun, maybe the Crawl for a Cause in the Grove, happening Saturday, December 8th from 1-6pm, is more your style.

For this pub crawl, instead of Santa costumes, the attire is Ugly Christmas sweaters, and I know everyone has one of those! Crawl for the Grove is $5 in advance or $8 at the door. Each bar will have drink specials for those wearing ugly sweaters and the money benefits Forest ReLeaf. Prizes will be awarded for Best and Worst Sweater plus tons of door prizes. Also, if you’re one of the first 150 people to purchase tickets, you’ll get a commemorative “Crawl the Grove” koosie. The schedule has not been posted yet so RSVP on the Facebook page so you know where to go.

In case you need some help finding an outfit, you can visit Amazon.com to find some great “ugly” Christmas sweaters

, which actually, not all of them are too expensive and ladies, there are some pretty cute elf costumes

as well with awesome Elf boots

. Also, Johnnie Brock’s has some interesting costumes as well.

*Update: Check here for pictures from Santacon 2012: RFT and Facebook