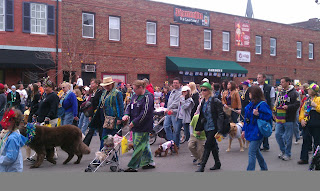 Next weekend is the “big weekend” for Mardi Gras season in St. Louis with the River City Casino Grand Parade stepping off on Saturday, Feb. 18th. That parade is the largest in the St. Louis region and is the cornerstone event for Mardi Gras Inc.’s 14-event festival season. But, that’s next weekend.

This weekend is ruled by food, runners and pets.

The Southern Comfort Taste of Soulard features 32 establishments serving food and Southern Comfort products on Saturday and Sunday. Ticket booklets are $25 and include 6 tickets for food from any of the participating venues and 1 Southern Comfort drink. The full menu is available on the website, so pasting it here would require me to punch myself in the face for committing a party foul. Considering I love Soulard, I say you need to hit this event up.  You can buy tickets online before the event or at any of the participating establishments on the day of. Do yourself a favor and check out the menu. If you don’t feel the need to buy a ticket after that, you must be one of those weird compulsive dieters who doesn’t like food.

The Supplement Superstores Run For Your Beads 5K happens Saturday morning. Some people like running. This event is for them. Some people like to work up an appetite for Taste.  This event is for them too. If you are familiar with other Mardi Gras events, you know this won’t be your typical 5K. Expect the break stations to be offering something other than water to get you through the race.

The Beggin’ Pet Parade is the highlight of the season for many in the area. Have a pet? Dress ’em up and walk them in the parade. $10 to register and all of the proceeds go to Open Door Animal Sanctuary. Don’t have a pet to put in the parade? Come down and watch anyways. Parade starts at 1pm Sunday. Details are available on the website. A press release from the event sponsors, Nestle Purina, touted the figures of 8,000 pets in the parade and 80,000 people involved or watching the parade. Organizers are attempting to set the Guinness World Record for “Most Dogs in Costumed Attire”. If you can, register your pet online before Friday at 5pm, but you can also register at the event.  Pets must be kept on a leash and be up to date on vaccinations.

The first heat in the PetSmart Wiener Dog Derby races at 2pm Sunday, just after the Pet Parade. $10 to register your dachshund to race or free to watch.

If you are in the St. Louis area this weekend, you need to head down to Soulard for one or more of these events. If you are already planning on going and you use Twitter,  be sure to take plenty of pictures of your little one and tweet them out using the hashtag #stlmg.  The Mardi Gras Inc crew will be keeping an eye on the feed all day and retweeting the best.

i Love Soulard (.com) and you should too.

Post brought to you by Mills Properties
Photos courtesy of iLoveSoulard.com