St. Louis Blues: The Blues play the Los Angeles Kings at home before heading out to play the Minnesota Wild on Saturday. The game’s theme is Hockey Fights Cancer. Join Siteman Cancer Center and the Blues as we increase cancer awareness on December 1, when the Blues take on the Los Angeles Kings. With the purchase of your special theme ticket, you will receive a custom logoed beanie honoring the type of cancer you would like to represent!

One Night Nation at Arch Winterfest: The St. Louis Blues and St. Louis Cardinals are teaming up to celebrate One Nation Night during Winterfest at the Arch on Thursday, November 30th. This event will include appearances and autograph signings by players and alumni, Louie and Fredbird along with special prizes, giveaways such as Blues tickets, autographed pucks and baseballs, jerseys and other apparel, and much more! One Nation pucks will be given out to the first 400 attendees. Enjoy a performance of the National Anthem by Blues fan favorite Charles Glenn, followed by a puck drop ceremony with St. Louis Blues Governor and Chairman Tom Stillman, St. Louis Cardinals President Bill DeWitt III and others.

Fantasia: Fantasia, the season 3 winner of American Idol, brings her Christmas After Midnight tour to Peabody Opera House with special guest Demetria McKinney. In 2007, Fantasia landed the coveted role of Celie in Broadway’s The Color Purple for which she won a Theater World Award. In 2010, Fantasia released the critically acclaimed Back To Me, which featured the hit single “Bittersweet” that earned her first ever Grammy Award for Best Female R&B Vocal Performance and a NAACP Image Award for Outstanding Song. Tickets start at $56.50.

Soulard Holiday Parlour Tour: Get into the holiday spirit with one of St. Louis’ most time-honored traditions, the 42nd Annual Soulard Holiday Parlour Tour. Soulard Restoration Group invites guests to view featured homes decked in their holiday best on Saturday from 10:00 a.m. to 4:00 p.m. and on Sunday from 10am to 3pm. Tour groups will be taken from home to home by heated shuttle bus after beginning festivities at Gene Slay’s Boys’ Club of St. Louis. This much-anticipated annual event will feature tours of several Historic homes, a holiday bazaar, food, music, and more. Tickets are $25 per person in advance and $30 per person the day of the event.

Jim Gaffigan Noble Ape Tour: Stand-up comedian, actor, writer, and producer, Jim Gaffigan will make a stop in St. Louis on his comedy tour. His humor largely revolves around fatherhood, velociraptors, laziness, and food. In his work, he creates voices for characters in his scenarios to accompany his jokes. He is also regarded as a “clean” comic, using little profanity, sexual or provocative content in his routines. Gaffigan has received the award for Concert Comedian at the American Comedy Awards, among other awards. Tickets start at $32.75.

The King & I: Set in 1860’s Bangkok, the musical tells the story of the unconventional and tempestuous relationship that develops between the King of Siam and Anna Leonowens, a British schoolteacher whom the modernist King, in an imperialistic world, brings to Siam to teach his many wives and children. Directed by Bartlett Sher. One of Rodgers & Hammerstein’s finest works, THE KING AND I boasts a score that features such beloved classics as “Getting To Know You,” “I Whistle a Happy Tune,” “Hello Young Lovers,” “Shall We Dance” and “Something Wonderful.”

Stray Rescue Hope for the Holidays Gala: An inspirational evening demonstrating how strong community partnership and support continues to make Stray Rescue “Pawssible.” The Gala is expected to attract over 600 guests and will include dinner, entertainment, a live auction, a silent auction, raffles, all-star animals and more. These dogs need your support! 100% of the proceeds from Hope for the Holidays is used to rescue, rehabilitate and find loving homes for the dogs. Tickets are $200.

Central West End Window Walk: The Window Walk is a month-long celebration highlighting the many wonderful attributes of the holidays in the CWE. Visitors are invited to stroll amidst elegantly decorated windows while shopping at boutiques, enjoying seasonal libations and delicious meals at local restaurants. The Central West End Business Community Improvement District will collect toys and blankets for our Window Walk sponsor, Shriner’s Hospital St. Louis, this year. Drop off your donations at the gift wrapping station at the intersection of Maryland and Euclid. 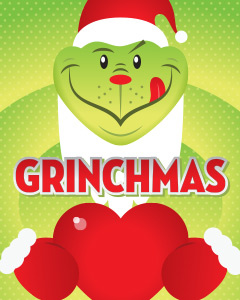 South Grand Grinchmas: The Grinch will be arriving in the South Grand neighborhood with an unusual motive: to spread holiday cheer and joy, and to raise funds for Shriners Hospitals for Children. For a $7 donation to the hospital, participants can get their photo taken with the Grinch. Those who bring a toy donation for the children at Shriners Hospitals for Children can get a photo taken for only $5. The Grinch will be joined by the clowns from Moolah Shriners, who will be on hand to provide free face-painting and balloon animals. Sassy Selfies photo booth, will be on hand to make your experience with the Grinch more memorable.

17th Annual Wintermarkt: The reimagining of a traditional German festival called Christkindlmarkt. Enjoy German-inspired treats, a music stage and local artisans selling their handmade goods, nestled in one of St. Louis’ most diverse and friendliest neighborhoods. Visitors will find vendors selling jewelry, art, handmade crafts, candles, Christmas ornaments and locally produced honey. A variety of musical groups will perform throughout the day along with a blacksmith demonstration. There will be roasted chestnuts, barbeque, soup, glühwein (mulled wine) and hot apple cider. A classic German beer will also be provided by local brewery, Schlafly.

An Evening with Leslie Odom Jr.: Multifaceted performer Leslie Odom, Jr., best known for originating the Tony Award-winning role of Aaron Burr in the original cast of Broadway’s Hamilton and his role in the TV series Smash, joins the SLSO for an extraordinary event. Performing hits from his debut solo album that quickly rose to number one on the Billboard and iTunes Jazz charts and more, this one-night-only concert is the perfect way to begin your holiday season.

Frankie Valli & The Four Seasons: Frankie Valli, who came to fame in 1962 as the lead singer of the Four Seasons, is hotter than ever in the 21st century. Thanks to the volcanic success of the Tony winning musical Jersey Boys, which chronicles the life and times of Frankie and his legendary group, such classic songs as “Big Girls Don’t Cry,” “Walk Like a Man,” “Rag Doll,” and “Can’t Take My Eyes Off You” are all the rage all over again. Tickets start at $60.

And don’t forget about the holiday lights! There are so many amazing option in St. Louis – you can walk, drive, take a sleigh ride, and more – Holiday Lights in St. Louis.