St. Louis Cardinals: The Cardinals play at home this week, against the Royals through Thursday. The weekend games will be played against the Braves and are celebrating the 1987 National League Championship Anniversary. Friday’s promo giveaway is a Adult 1987 Road Gray Mystery Jersey, Saturday’s promo item is a Replica 1987 National League Championship Ring and a Topps Baseball Card Pack and Sunday’s game item is a Cardinals Coaster Set.

Jim Jefferies: Unusual Punishment Tour: Comedian Jim Jefferies is stopping in St. Louis on his latest major multi-city stand-up comedy tour. Jefferies burst onto the scene after his popular debut HBO special “I Swear to God.” His additional successful comedy specials include “Contraband,” “Alcoholocaust,” and “Fully Functional.” Jefferies has firmly established himself as one of the most popular and respected comedians of his generation, with a controversial and belief-challenging stand-up style that continues to surprise and entertain audiences across the globe. The tour announcement comes hot of the heels of his fifth major stand-up comedy special, “Freedumb,” which premiered July 1st on Netflix.

Blues At The Arch: Free Friday Blues concerts at the North Gateway Grounds by Eads Bridge. Friday’s performers include: Carolyn Mason, who sings the music of Blues greats like Shirley Brown, Etta James, and Aretha Franklin, Mickey Rogers, who appears in the Hwy 61 Museum in Leland, the Mississippi Walk of Fame in Greenville and various national and international blues magazines, and David Dee, an East St. Louis native who has been making a dent in the St. Louis contemporary blues scene for at least two decades. 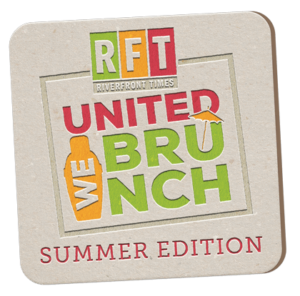 United We Brunch: Riverfront Times is once again bringing together the best restaurants in town with one mission: unite to cure St. Louis’ hangover. Enjoy screwdrivers, bellinis, bottomless Bloody Marys and Mimosas, Irish coffee, craft beer, and of course, delicious brunch items from the best brunch hot spots in St. Louis, including: Bar Louie, Sanctuaria, Seed Sprout Spoon, Three Monkeys, The Tipsy Goat, Yolklore, Wheelhouse, and many more. GA is $40 in advance and gets you Brunch Tastings, Bottomless Bloody Marys, Mimosas, Bellinis, Screwdrivers and a Boozy Coffee & Gift Bag. Go VIP for $50 and get all of the above plus a VIP Gift bag with commemorative glass, full bar in VIP area and VIP entrance.

St. Louis Wing Ding: The best chicken wing contest and tasting event ever. Local restaurants showcase their prized chicken wings and compete for trophies. Restaurants include: HotShots, St. Louis Wing Co, Sugarfire, The Slider House, Three Kings, The Wheelhouse, Sumgula’s and more! A panel of judges choose the winners in a blind taste test. Event attendees vote for their favorites in the “People’s Choice” category. Raffle and Silent Auction will also be held. Have fun, eat wings and help raise money that will go directly toward UCP Heartland program services!

Herbie Hancock: Now in the sixth decade of his professional life, Herbie Hancock remains at the forefront of world culture, technology, business and music. In addition to being recognized as a legendary pianist and composer, Herbie Hancock has been an integral part of every popular music movement since the 1960s. In honor of his work, Hancock was awarded the Grammy Lifetime Achievement Award in February 2016. Hancock is currently in the studio at work on a new album. Hancock will be joined at this performance by Vinnie Colaiuta (drums), James Genus (bass), Lionel Loueke (guitar) and Terrace Martin (keyboardist/saxophonist). Tickets start at $40.

Diva Dash 5K & Lil’ Princess Fun Run: A great event to celebrate being women and girls! Get your inner Diva on at this fun event! Participants in the 5K receive a race shirt, custom bib number and large finisher’s medal. Lil’ Princess participants receive a shirt, tiara, and princess medal! Pull on your tutus and let’s have a great time while raising money for a great local charity, the Tree House of Greater St. Louis, which provides award-winning equestrian therapy programs for people with disabilities in St. Louis City, St. Louis, St. Charles, Warren, and Lincoln Counties. Registration is $40 for 5K, $15 for Princess Run.

2nd Thursdays: Living Art: August is all about communication as the Foundry Art Centre presents an exhibition of word-centric artwork in Context II and the first ever Literary Festival will take place on August 26, 2017, in partnership with the St. Charles City Country Library. Dig into art history and learn how different plants within artwork tell the viewer more about what they’re seeing using symbolism and representation. Communicate like never before using your creativity!