Wonder what’s going on around St. Louis this weekend? RealLifeSTL has you covered with the STL Weekend Events Guide. This weekend head to Soulard for the annual Twelfth night celebration, which marks the beginning of the 2017 Mardi Gras season in St. Louis.

The Winter Classic festivities conclude this weekend with the One Nation Classic at Busch Stadium put on by the St. Louis Blues. You can also still do some ice skating under the Gateway Arch with Winterfest at the Arch. Speaking of the Blues, they have two games this weekend at Scottrade Center.

Reel Big Fish and the Harlem Globetrotters are also in St. Louis this weekend, while those in the mood for Star Wars, roller derby and reptiles can also find something to their liking.

Twelfth Night: Join us at Johnny’s at Soulard for pomp and circumstance, followed by a raucous bar crawl. Beginning at 5:00pm, the petitioning of the Board of Directors begins, followed by the 7:00 announcement of the christening of the start of the 2017 season. After the announcement, we’ll parade through the streets of Soulard from Johnny’s to Soulard Market to crown the 2017 Mardi Gras Rex.

1764 Twelfth Afternoon Ball: Commemorate the end of the holiday season just how St. Louisans did in 1767. The Twelfth Afternoon Ball recognizes the completion of the Twelve Days of Christmas, which leads to Mardi Gras. This year the Twelfth Afternoon Ball focuses on the music, dance and food from 1767. at 12pm, enjoy a Dennis Stroughmatt et L’Esprit Creole concert featuring popular French holiday music of the early St. Louis settlers At 1pm, enjoy dancing, King Cakes and refreshments while Deborah Hyland teaches the most popular dances of the mid 18th century. Food Historian Suzanne Corbett will present treats common to St. Louis dinner tables during the 1764 holiday season. King’s Cake will be also served, and the King and Queen of Mardi Gras will be crowned.

St. Louis Blues: The Blues just won the Winter Classic, woot woot! The Blues continue to play at home this weekend with a game against the Carolina Hurricanes on Thursday followed by the Dallas Stars on Saturday. Tickets start at $32.

Harlem Globetrotters: The Original Harlem Globetrotters are preparing for their action packed 2016-2017 tour! A star-studded roster will have fans on the edge of their seats to witness the ball handling wizardry, basketball artistry and one-of-a-kind family entertainment that thrills fans of all ages. Don’t miss it when it returns to Scottrade Center January 6 & 8! Tickets start at $22.50.

Wedding Show:The largest wedding planning event in the Midwest with over 80,000 square feet for easy access to exhibitor displays, extra wide aisles, and no long lines. Registration $8 per person at the door (cash only) or pre-register online at Eventbrite for a discount. There will be fashion shows, live entertainment, discounts and giveaways, and free parking at Ballpark Village with free limo bus shuttles rides compliments of Fun Tyme Limousine.

One Nation Classic: The One Nation Classic will feature a skills competition from current Blues players, St. Louis’ Greatest Pick-Up Hockey Game and a contest between local police officers and firefighters on the final day of ice at Busch Stadium. Tickets are only $10 each and include access to all three events. Tickets will also be available at the Busch Stadium Box Office beginning Jan. 3 through the day of the event. All proceeds benefit Blues for Kids, youth hockey development in St. Louis and Cardinals Care. 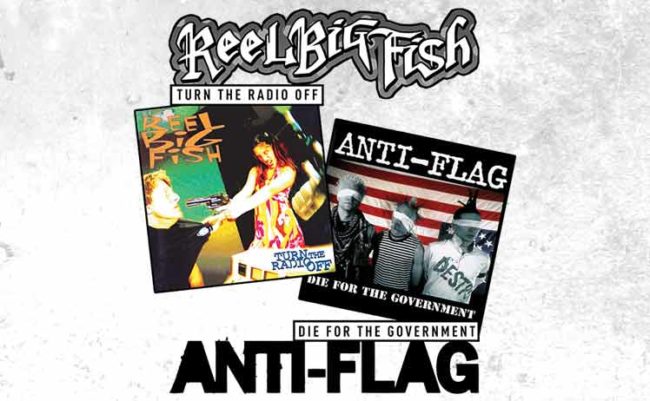 Reel Big Fish: Celebrating 20 years, the ska punk band with awesome hits from the 90s like “Sell Out,” “She Has A Girlfriend Now,” Where Have You Been,” and more, are coming to St. Louis as part of their world tour with special guests Anti-Flag, BallyHoo and Direct Hit. Tickets are $22.50 in advance or $25 at the door.

Arch Rival Roller Derby: Roller Derby is back in play! This week’s bout features the M80s vs. Smashinistas at 6:30pm followed by the Creve Coroners vs Raiders of Forest Park at 8pm. Parking is free. Tickets are only $10 and children under 10 are FREE! Thanks for all your support, we appreciate your patronage!

St. Louis Reptile Show: With over 18 years of shows in St. Louis, our reputable show features over 8,000 sq ft of reptiles, amphibians, feeders, and supplies for all exotic animal friends. Look for pythons, tarantulas, geckos, African Clawed Frogs, corn snakes, skinks, chameleons, and much more. We do our best to see to it that only the most reputable vendors set up at our show, with the cleanest and healthiest animals possible. During each show, veterinarian Dr. Dan Wentz, of Ferguson Animal Hospital, oversees the animal selection and watches for any problems. Dr. Dan also provides coupons good for a free initial office visit for your new animal, to help you get off to a healthy start.

St. Louis Ambush: Come out to the St. Charles Family Arena and cheer on the Ambush as they take on the Baltimore Blast! Coming off a loss against the Kansas City Comets, they will play at home on Thursday against Baltimore before heading back out to take on the Milwaukee Wave. Ticket prices start at $18.

Fight Hard MMA: Officials from Fight Hard MMA announced that the Midwest’s most popular all professional MMA promotion will kick off it’s 2017 tour on Saturday, January 7th at the Family Arena. The exciting card will be headlined by a four man, Fight Hard MMA Heavyweight Tournament featuring bouts between Max McNeely vs. Mike Wright and Steve Rustemeyer vs. Kyle Noblitt. The winners will square off this spring for the vacant Fight Hard MMA title belt. Free GA, parking is $20.