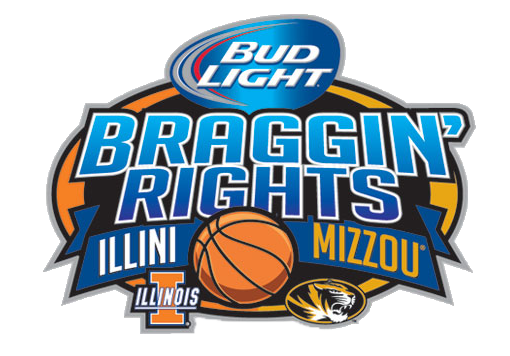 The University of Missouri Tigers will play with University of Illinois Fighting Illini this Wednesday in St. Louis in the annual Braggin’ Rights game. The game has been mostly an annual tradition for the teams since 1980. Illinois leads the Braggin Rights series 22-12, including a 62-59 victory last season.

Missouri is 5-5 on the season after loses to #13 Arizona and North Carolina State in their last two games. Kim Anderson’s young team is led by newcomers Kevin Puryear and point guard Terrence Phillips.

Illinois is 7-5 on the season after beating South Dakota 91-79 over the weekend.  They are led by the trio of Malcom Hill, Kendrick Nunn and Mike Thorne Jr.

While both teams are currently rebuilding, Illinois under John Groce and Missouri under Anderson, the teams have had intense battles in the past, often with one or both teams nationally ranked.  The most famous meeting came in 1993 when Missouri won 108-107 in triple overtime.

The St. Louis Blues will return home after a two-game road trip to face the Dallas Stars on Saturday, December 26 at Scottrade. The Blues beat the Calgary Flames 3-2 over the weekend to improve to 20-10-4 on the season. Before returning to St. Louis, they play in Philadelphia on Monday and in Boston on Tuesday.

Vladimir Tarasenko has five goals and four assists in his last five games. He scored his 21st goal of the season in the win over Calgary and is currently second in the NHL in that category.

Elf The Musical
Catch the tale of Buddy the elf on-stage at the Peabody Opera House in downtown St. Louis for two shows each on December 26 and 27.  Tickets for Elf The Musical range from $30-$82.

The Trans-Siberian Orchestra stops in St. Louis this weekend as part of its 2015 Winter Tour. This has also become an annual tradition for many St. Louisans. The group will perform “The Ghosts Of Christmas Eve” twice on Sunday, December 27. Tickets for the shows can be purchased online or at the Scottrade Center box office and range from $36-$72.
Date: Sunday, December 27

El Monstero At The Pageant

St. Louis Ambush return to The Family Arena on Sunday, December 27 to face the Milwaukee Wave. The Ambush, still looking for their first win of the season, will be playing their first home contest under the direction of new head coach Tony Glavin, who replaced Daryl Doran last week. The team also brought on Jaime Swanner as the goalkeeper coach.

The Ambush lost for the seventh time on the season over the weekend. They led the Cedar Rapids Rampage 7-2 at one point, but ultimately lost the game by a score of 9-2. Gordy Gurson recorded his second-consecutive hat trick and now has 13 goals on the season.

Tickets for the game are available at The Family Arena box office or online through MetroTix and range from $15-$47.