The U.S. Men’s National Team comes to St. Louis this Friday to face St. Vincent and the Grenadines in the team’s first game in their quest to qualify for the 2018 World Cup in Russia. The match will be the USMNT’s first in St. Louis since June of 1997.

The match, which is one at least 16 that it will need to play in order to qualify for Russia, comes at a very interesting time for U.S. Soccer. Many are questioning coach Jurgen Klinsmann’s job status in light of the team’s three recent loses on U.S. soil. The USMNT has been bought in a World Cup Qualifying group that includes Guatemala, and Trinidad & Tobago as well as St. Vincent and the Grenadines. The USMNT will play each of those other teams twice (one home, one away) between Friday and September of 2016. The top two teams in each of the three qualifying groups will advance to the Final Round of World Cup Qualifying, otherwise known as the Hexagonal. “The Hex” will consist of home and away games between all six teams between November 6, 2016 and October 10, 2017 with the top three moving on to the 2018 FIFA World Cup Russia. 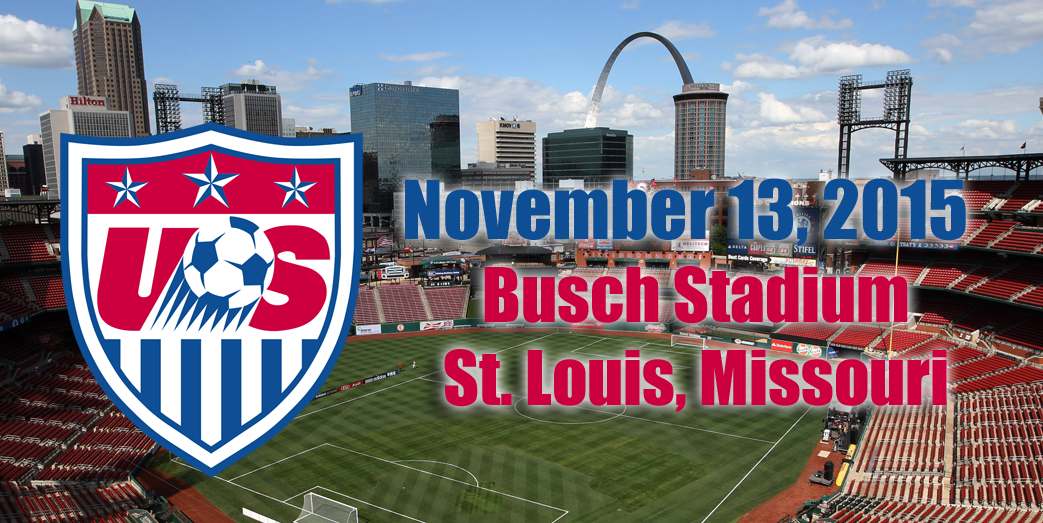 USMNT vs St. Vincent and the Grenadines

USMNT coach Jurgen Klinsmann named his roster for the team’s first two qualifying matches last Friday. One notable absence is Clint Dempsey, who Klinsmann left off in favor of giving younger players a chance to make an impact. Back is Fabian Johnson, who was unfairly thrown under the bus by his coach after the team’s last loss.

Matt Miazga and Darlington Nagbe have been named to the USMNT for the first time and both could see their international debuts made at Busch Stadium. Kevin McCauley of SB Nation called Miazga, “the future of the USMNT defense”. Nagbe has been a special player for the Portland Timbers of Major League Soccer this season and recently won Player of the Week and Goal of the Week honors for the final week of the MLS season.

Other notable players on the roster are Bobby Wood, who Noah Davis of ESPN recently said should be getting playing time over Jozy Altidore, Gyan Zardes‘s father ( Gyasi Zardes) and young Jordan Morris of Stanford.

St. Louis will be represented on the team by defender Tim Ream, who plays professionally for Fulham FC. Ream played his high school soccer for St. Dominic then moved on to play for the Saint Louis University Billikens under Dan Donigan from 2006 – 2009. His younger sister Molly currently plays for coach Katie Shields and the SLU women’s soccer team.

St. Vincent and the Grenadines is actually “one destination, 32 gorgeous Caribbean islands“. The nation is home to about 103,000 people and its drivers drive on the left side of the road. The Vincy Heat are coached by former player Cornelius Huggins, who is assisted by Ezra Hendrickson, who captained St. Vincent and the Grenadines, played in the MLS and currently coaches Seattle Sounders FC 2. The young Vincy Heat team is ranked 129th in the world, according the FIFA world stadnings. The USMNT sits at 33.

The USMNT’s History In St. Louis

While the U.S. Men’s National Team hasn’t played in St. Louis in a very long time, its history does feature St. Louis prominently. Back in 1989, the team played El Salvador at the Soccer Park in Fenton in its final home match in qualification for the 1990 World Cup in Italy. While the USMNT’s draw that day left them short of clinching a trip to Italy, they would do just that on November 19, 1989. Paul Caligiuri’s goal that day sent the USMNT to the World Cup for the first time since 1950, when St. Louis made a major contribution to the team that famously beat England 1-0.

Be Part Of The Festivities Surrounding The USMNT Game

When the U.S. Men’s National Team plays a game, it isn’t just a single event. Things are no different in the soccer hotbed of St. Louis.

U.S. Soccer is putting on a host of events beginning Thursday, November 12. FanHQ will be held at Ballpark Village in downtown St. Louis. Starting November 12 at 7 pm, there will be music from Feel Good Inc. as well as other activities. Food, drink and merchandise will be sold. “Special guest appearances” are on the ticket as well.

Lori Chalupny and Landon Donovan will join KMOX’s Charlie Brennan for an event at 9 am on Friday, November 13 at the Budweiser Brew House in Ballpark Village. The event is free, but reservations are required.

The American Outlaws, the official supporters’ group, will have a large section of fans at the game in the bleacher section at Busch. They will be hosting a party Thursday night at Amsterdan Tavern on Morganford Road. The Night Before party will include giveaways from Oskar Blues Brewery and bands as well as food and drink deals. On Friday, the Outlaws will be hosting The Tailgate from Noon – 4:30 pm at Kiener Plaza. That will also feature bands, food, free stuff and plenty of Oskar Blues. The Budweiser Clydesdales will then lead The March of fans into Busch Stadium for the game.

Check out how Oskar Blues Brewery has managed to break into marketing with U.S. Soccer despite Budweiser being the official beer.

The Sendoff Concert will be held Saturday from 2 – 4:30 pm featuring Travis Marvin and Josh Thompson.

How Do I get Tickets To See The USMNT vs St. Vincent & The Grenadines?

A limited number of tickets are still available through the Busch Stadium box office. Want to try your luck at winning tickets? Enter this contest through CBS Sports 920 and insideSTL.com. You can also this contest to win tickets from Ballpark Village.

Kickoff for the U. S. Men’s National Team vs St. Vincent and the Grenadines is set for 5:30 pm on Friday, November 13. The match will be televised live on ESPN2.