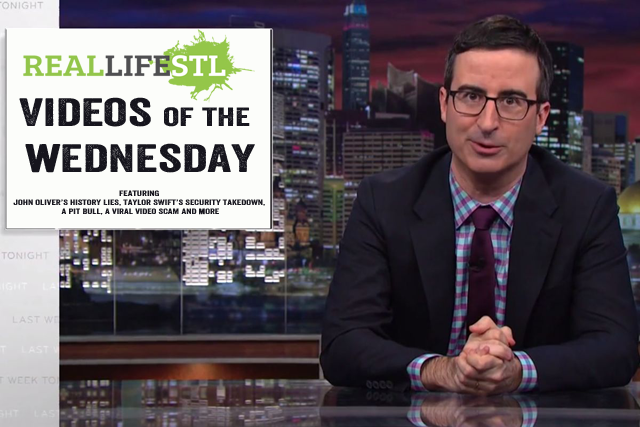 Top 10 Movie Villains of All Time

This Top 10 Movie Villains of All Time comes to us from CineFix.  The list features City of God‘s Lil Ze, Max Cady from Cape Fear, Heath Ledger’s The Joker from The Dark Knight and others.

Top 10 Movie Villains of All Time

Scotty McCreery won the 10th season of American Idol and has since carved himself out a nice little niche in the country music community. McCreery is currently working on a new album, but has not released the title or release date. He has said his new album will be less traditional that 2013’s See You Tonight and that he’s working with writers that are also working on the latest Luke Bryan tracks.

Taylor Swift Keeps On Singing As Security Takes Down Idiot

At the recent San Diego stop on Taylor Swift’s 1989 World Tour a crazy idiot of a fan hoped on stage as Swift was singing. The singer was far away from the fan, who was quickly taken down by her security.

TMZ reports that the man, Christian Ewing, snuck into the concert and made his way to the front of the audience before charging on stage during Swift’s performance of “Style”. A security guard reportedly broke a rib during the process of capturing Ewing. Ol’ Christian was being held in jail with bail set at $35,000. Hopefully he gets charged with assaulting the security officer too.

Sam Worthington stars in Paper Planes, a movie about the one boy’s quest to make the perfect paper airplane. The Australian film has been floating around the festival circuit since late last year.

On August 30, 2015 a French woman named natalie Amyot uploaded a video to YouTube asking the internet for help in finding her “baby daddy”.

On September 1, 2015 Natalie was back with another video titled “I Found Him”. Did she really find her baby daddy via the power of the internet? No. The video was a stunt by a company called Sunny Coast Social Media. Sunny Coast made the video for Holiday Mooloolaba. Andy, the owner of Sunny Coast, says they do “viral videos for businesses”. I really, really hate that term, “viral video”. You can’t make a “viral video”. A viral video is one that “becomes popular through a viral process” according to Wikipedia. Why am I using the Wikipedia definitation? Because IT ISN’T A REAL THING. You can’t make a “viral video”. You can be credited with making a video that goes viral after the fact, but you can’t claim as a business that you “make viral videos” because then you are saying that your videos are immediately popular on the internet and you are a liar.

Thomas Rhett’s new music is definitely not what you’d expect looking back to his first hit with “Beer With Jesus”. His Tangled Up album hits shelves on September 25. Rhett previously announced that the album will feature collaborations with Jordin Sparks and rapper Lunch Money Lewis among its 13 songs.

On the heels of “Crash And Burn”, here’s his new single, “Vacation”.

MMA fighter Monique Bastos was on her way to jiu-jitsu training in Brazil when she was attacked by two men. The men stole her cell phone and one got away after Bastos knocked the men off their motorcycle. The other man was quite unlucky. Bastos used a few of her unique talents to take him to the ground and hold him until the police arrived. The thief appears to be in quite a bit of pain in this video.