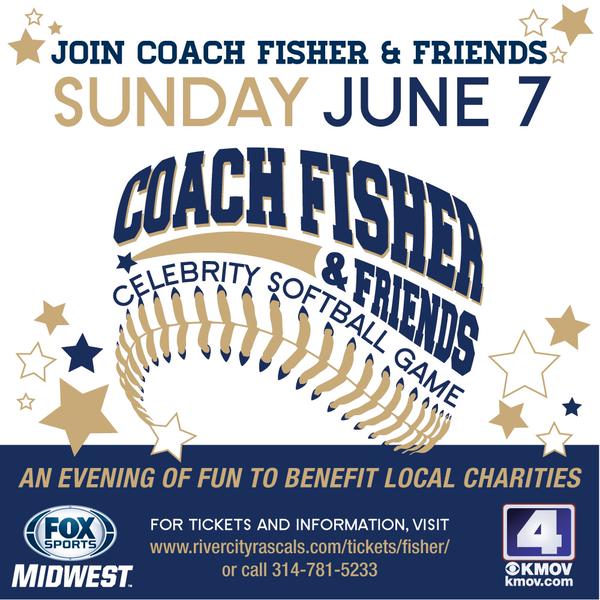 The 2015 edition of the Coach Fisher & Friends Celebrity Softball Game will take place on June 7 this year at TR Hughes Ballpark in O’Fallon, MO. The location is new for the event this year as it has been at GCS Ballpark in Sauget, Illinois since Jeff Fisher came to the St. Louis Rams and brought his annual event here.

Many of the St. Louis Rams players attend this event each year. In 2012 St. Louis fans got their first glimpse at the recently-acquired Cortland Finnegan. If I were a betting man (actually, if I could bet on this I would) I’d say fans can expect to see both Nick Foles and Todd Gurley at the event. James Laurinaitis, Johnny Hekker and several other Rams veterans will likely be on hand. Other notable area celebrities that have played in the game in the past include Ozzie Smith, the Fox Sports Midwest Girls, Remy of 93.7 The Bull and Murphy Lee.

Coach Fisher has already guaranteed a win by his team, although in years past his wins haven’t always been on the “up and up” shall we say. St. Louis Rams Special Teams Coordinator John Fassel will coach the team that I assume will fall just short of the win.

A silent auction will also be held during the evening. In years past, the auction has included signed memorabilia from St. Louis sports figures as well as notable athletes and celebrities from around the country.

Tickets are $25 for Box Seats and $10 for Bleacher or Lawn Seats. Tickets can be purchased in advance at RiverCityRascals.com or at the box office on June 7. For other questions, call 314-781-5233.

Jeff Fisher started hosting an annual softball game for charity back in 2001 when he was the head coach of the Tennessee Titans in Nashville. By 2008, the event had raised north of $340,000 for charity.

In case you’re on the fence about heading out to O’Fallon, Missouri on June 7th, here’s a great roundup of last year’s event.