This year will be the 26th Annual Bob Costas Benefit at the Fox Theatre to benefit the Costas Center at SSM Cardinal Glennon Children’s Hospital. It was announced today that Diana Ross will headline the May 23 event. A comedy act will also appear, though that hasn’t been announced yet. A date for ticket sales has not been announced yet. The annual Homers For Health fundraising campaign with the St. Louis Cardinals is also kicking into gear to benefit the Cardinal Glennon Children’s Foundation. 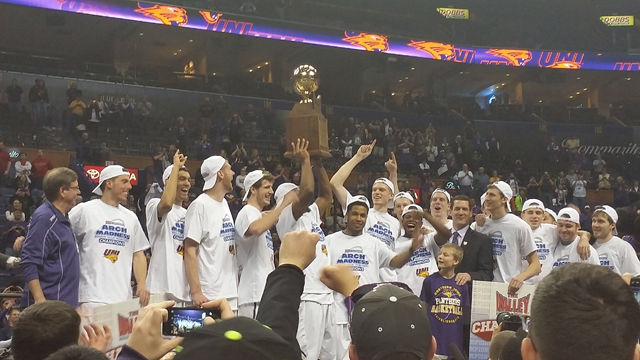 Northern Iowa roared back from a 14-point halftime deficit yesterday at Scottrade Center to beat Illinois State 69-60 and take the Missouri Valley Conference tourney championship. Seth Tuttle, the conference player of the year and the tourney MVP, spurred a 25-4 run in the second half to take control of the game. With the win, the Panthers of UNI receive an automatic bid to the NCAA Tournament. Jerry Palm of CBS Sports is predicting Northern Iowa will be a #5 seed in the West.

According to Mike Kern, the Associate Commissioner of the Missouri Valley Conference, 50,187 people passed through the gates at Scottrade Center over the course of the tourney. This marked the 13th season in a row that at least 50,000 people have attended the tournament.

We’ll have more on the box office numbers on Thursday in our Weekend Movie Guide. We’ll also preview Cinderella and Run All Night, the two movies opening in wide release this weekend.

Apple is holding a “Spring Forward” press event today where they are expected to announce plans for the Apple Watch as well as a new Macbook. The Verge is among the outlets covering Apple’s “Spring Forward” event live. It’s already been announced that the lowest-end Apple Watch will retail at $349, but people are guessing that a 18-karat gold version may be priced as high as $20,000. Apple has thrown a ton of money behind a PR and marketing campaign pushing the Apple Watch. There’s a 12-page advertisement in the March issue of Vogue that is estimated to have cost them $2.2 million. MacRumors.com has some ideas on what to expect today from Apple.

You can watch Apple’s Spring Forward event live on the Apple website. The stream is apparently only available on Apple devices, however.

HBO took the opportunity at the Apple “Spring Forward” event to announce that it’s streaming service, HBO Now will launch next month on Apple TV for $14.99 per month. As a special promotion, if you sign up in April for the service you can get your first month free. The promotion is marketed as “get HBO Now on your Apple TV in time for the Game of Thrones season premiere. A trailer for the new season of the show was then played. Season 5 of the show will premiere on April 12.

Jagger, a three-year-old Irish Setter, collapsed and died less than 24 hours after competing in the world’s largest dog show. It’s suspected that the dog was fed a poisoned steak by a rival breeder. Two other dogs have reportedly shown symptoms of possibly being poisoned at the event. The latest reports say as many as six dogs may have been poisoned.

President Barack Obama has announced a new program aimed to train folks and then connect them with jobs in the technology sector. $100 million in Federal funding will be used to support “training opportunities for low-skilled workers”. 300 employers have committed to increasing efforts to train and hire folks in software development, network administration and cybersecurity. It sure sounds like TechHire just needs to give that $100 million to LaunchCode so they can expand across the country. Actually, President Obama said in his speech that LaunchCode is a model for TechHire.

John Legend and Sam Smith released a new version of Smith’s “Lay Me Down” today for Red Nose Day, an event sponsored by Comic Relief Charity. Proceeds from the sale of the song will go to the charity.