Here are the Oktoberfest celebrations happening around St. Louis this year. 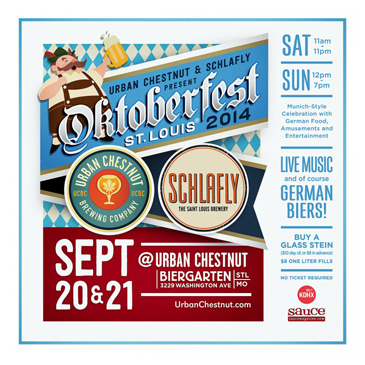 Schlafly and Urban Chestnut are teaming up with 88.1 KDHX and Sauce Magazine to put on this event at the Biergarten @ Urban Chestnut. Times are Saturday, September 20 from 11am- 11pm and Sunday, September 21 from Noon until 7 pm. The event is billed as a “Munich-style Celebration with German Food, Amusements and Entertainment.” No tickets are required for the events. You can buy a glass stein for $8 in advance or $10 at the event. After that, $8 gets you one-liter fills of “German biers”.

The traditional Belleville Oktoberfest will not be held this year due to the city celebrating its 200th anniversary. The Bicentennial Oktoberfest Weekend Celebration will be held in downtown Belleville instead. Music headliners include The Beach Boys on Friday night, Confederate Railroad, Sammy Kershaw, Aaron Tippin, Darryl Worley on Saturday and LoCash Cowboys and Craig Morgan on Sunday night.  Other local favorites appearing during the weekend include Steve Ewing and Old Salt Union. Aside from music, the celebration will include historic demonstrations, Civil War re-enactments, rides, a petting zoo, vintage baseball and a naturalization ceremony. A variety of food and drinks will be available for purchase, including German cuisine.

No word on if The Beach Boys will be singing “In My Room” in German.

Organizers will attempt to grill a 200-foot bratwurst on Sunday morning at 11 am. Schubert’s Packing Co. is making the brat with natural casing and “a 100 percent gluten-free, lean pork”. 10th Street Baking Company is making a 200-foot-long bun to fit the epic brat. The Lindenwood University football team will be carrying the bun and manning the grill. Volunteers have practiced the grilling with a 50-foot and 100-foot brat.  Donations will be accepted in exchange for a piece of the finished bratwurst and proceeds will go to Belleville-area food pantries.  Admission to the entire weekend celebration is free. 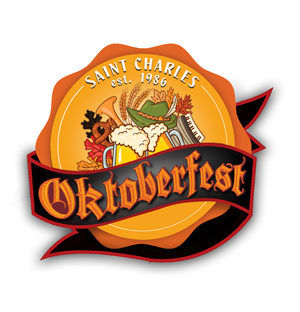 Frontier Park in Historic St. Charles players host to this Oktoberfest event. The festival runs from Friday, September 26th to Sunday, September 28th. Thigns kick off on Friday at 4 pm and run until 11 pm. Things get going again on Saturday morning at 10 am and run again until 11 pm. The Sunday funday starts at 10 am again and concludes at 5 pm. Events will take place throughout the grounds at places like the Barefoot Wine Garden, the 7-Up Ten Stage, the Hofbrau and Sam Adam’s tents, Schlafly Field and others. There will be plenty of German entertainers and culture throughout the weekend, but other acts including That 80’s Band and the Rough Ryders will also perform. Saturday morning will feature the JDRF Walk to Cure Diabetes. For the 5th year in a row, the Wiener Takes All wiener dog derby will take place Saturday afternoon. The Samuel Adams Raise the Stein stein-hoisting competition and the Swiss Meats Brat-eating contest will happen Saturday afternoon as well.   Sunday will feature the SSM St. Joseph 5K & Root Beer Fun Run and the Antique Car Show.

Admission to the event is free, but VIP tickets are available. VIP tickets for either Friday or Saturday at $65 and include a 1-liter Munich-style stein, five drink tickets, a meal ticket, Saint Charles Oktoberfest t-shirt, First Bank lanyard as well as unlimited soda and water. Private VIP restrooms will also be available.

The newest entry to the St. Louis Oktoberfest scene will take place at Union Station in downtown St. Louis. The gates open at 3:30 pm on Friday October 3. The German fun will go until 11 pm Friday night and from 11 am – 11 pm on Saturday, October 4th. Live music from the likes of the 20-piece Deutschmeister Brass Band and Uber Cool will happen on the Mainstage while “live displays of various facets of Germany’s rich culture” will take place on the German Cultural Stage.

General Admission tickets to the event are $10. Tickets to any of the nine Spaten Bier School sessions is an additional $25 and include five beer samples. $5 from each of those tickets will go to benefit the Police Athletic League and its youth sports programs. A VIP ticket is also available for $50. That ticket will include a St. Louis Oktoberfest presented by Budweiser shirt, a Budweiser stein filled with Budweiser as well as a refill, a shot of DeKupers Schnapps and a German sampler platter from Kenrick’s. VIP ticket-holders will also enjoy private restrooms and complimentary soft drinks and water. 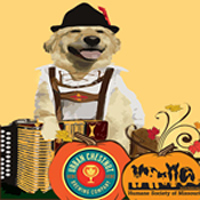 Even the dogs of St. Louis get an Oktoberfest event. Barktoberfest is put on by the Humane Society of Missouri on October 14 at Urban Chestnut Brewing Co. on Washington Avenue. Your ticket ($12/$15) gets you (or your dog) a delicious Urban Chestnut beverage and as well as treats for you both. There will be a Doggie Costume Contest with prizes in the categories of Best Costume, Funniest Costume and Best Owner/Dog Duo Costume. The contest will be hosted by Jen Myers of Y98. Have you been teaching your furry friend to bust a move? Y’all will want to enter the Doggie Polka Contest. Other games for you and your dog will include Frosty Paws Plinko.

All proceeds from Barktoberfest will benefit the Cinderella Fund, which helps homeless animals that need special surgeries and other medical procedures. 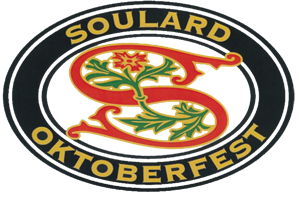 This will be the 11th year for one of the area’s largest festivals. Since growing out of its Soulard neighborhood location, the festival has shuffled locations. As first reported in the Soulard Renaissance, this year’s Soulard Oktoberfest will be held in three parking lots along South 7th Street across from Soulard Market. The expanded footprint will include carnival rides, including a Ferris Wheel and carousel. Admission to each day of Soulard Oktoberfest has been lowered this year from $10 to $5. VIP tickets are available for each day of the festival. VIP tickets include reserved VIP parking, an Oktoberfest mug, “several liters of draft beer or glasses of wine or bottles of soda or water”, several other alcohol samples, a German dinner and reserved seating in an Oktoberfest tent during dinner service. VIP tickets are $55 on Friday, $75 on Saturday and $45 on Sunday.
Soulard Oktoberfest features some of the most authentic German music you will find at an area festival with The Dorfrockers, the Chardon Polka Band and the Deutschmeister Brass Band. This year will also feature The Steve Ewing Band, the Austrian Express, Copper Box and the Soulard Blues Band, among others.

More than 20 different beers will be available throughout the festival grounds, including Urban Chestnut, Schlafly, Weihenstephan, Spaten and Budweiser. Kenrick’s will be providing the “traditional Oktoberfest favorites” in the food department and the Iowa-based Steve’s Meat Shop, Hot Aztec and Strange Donuts will be among the other food available.

Don’t forget to like us on Facebook to stay updated on events in St. Louis, and other fun Oktoberfest happenings.