Move over Angry Birds, there’s a new bad-ass app in town. Its creators, “2 jobless dudes who work full-time from their kitchen” created an awesome app that is very similar to the awesome card game, Cards Against Humanity

. The Evil Apples app is now available on all phones, and it’s free…so you’ll basically never get anything done ever again.

If you haven’t heard of or played Cards Against Humanity (and believe me there are still people out there who haven’t), I recommend reading up on it, or buying it and playing it immediately before jumping in to the app. While they do not use the same phrases as Cards Against Humanity, which would be stealing, and also not as fun, Evil Apples is basically CAH in app form. 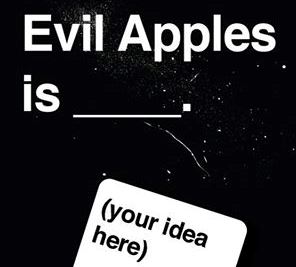 You can invite friends to play with you via text, Twitter, and Facebook, which I love because I can basically play all the time now! And if your friends are being slow to play (because they have lives outside of their phone games), you can also play with strangers. Just like the card game, there are expansion packs to get more variety. You buy them with bitcoins you collect from playing games, winning rounds, and winning games. You can also use bitcoins to make Wild Cards to write in your own answer, which is awesome! Each time you complete a game with friends or win a game, you get cake, and cake can be used to play more games with strangers (or you can spend real $ to play).

The problem with the addiction is that you start out with only 9 cakes, which means if your friends are playing slow and you must get your fix, you can only play 9 games with strangers before you have to buy more cake with real money to keep playing (unless you’re winning every game). I’m not one to pay real money on apps, but my addiction to this game has made me realize why Kim Kardashian’s app is making her millions. If I want to play more games, I have to have cake. But I have to win to get cakes, but I can’t win without playing more games. You see what’s happening here?

Trust me, I’m not the only one with the addiction. I play both strangers and friends who have a ridiculous amount of expansion packs, which means they’ve either been playing since the first day the app came out and winning a lot, or they’ve paid for some of those packs. I’ve also played many strangers more than once on different days, so I know I’m not the only addict playing every day.

The app is free so far and has no age limit, but much like Cards Against Humanity, the vulgarity is strong, especially on the Wild Cards. It’s not an app I would recommend downloading for those under the age of 18. Sadly, I have played some random rounds with kids who look much younger than 18. So watch out moms – know what your kids are downloading on their phones.

Here’s more info about the creators and the app. Oh, and if you want to Start a Game with me, my Twitter handle is @jessicadh83.