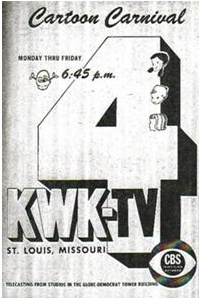 KMOV in St. Louis is celebrating its 60th anniversary this month. St. Louis has changed a lot in the time KMOV has been on the airwaves. From Pruitt-Igoe to the construction of the Gateway Arch, KMOV was here to cover it. From an NBA title to the inception of the St. Louis Blues, KMOV was on the scene. Two different NFL teams, multiple rebirths of Union Station and many other events and projects have been covered by the station throughout its history in St. Louis.

The station first went on the air July 8, 1954 with the call letters KWK-TV before changing those to KMOX-TV in 1958 and then to KMOV-TV in 1986. Channel 4 has been an affiliate of CBS since its inception. The St. Louis Globe-Democrat owned 23% of the station and its first offices were in the Globe-Democrat building at 710 N. Tucker in downtown St. Louis. The station is currently owned by Meredith Corp., which bought the station for $177 million earlier this year.

Regis Philbin was on KMOX-TV from 1972-1975 when he hosted Regis Philbin’s Saturday Night in St. Louis. Other notable personalities to appear on the station include Jamie Allman, who was an investigative reporter on the station. Allman is now a popular radio personality in St. Louis. Patrick Emory worked in the studio from 1973-1975 and later moved on to CNN from 1981-1991. Zip Rzeppa was a sportscaster on KMOV before taking his talents to the non-profit world. He is now the Executive Director of Mater Media.

Julius Hunter is one of the most well-known newscasters in all of St. Louis. Hired away from rival KSDK in 1974, he became the first African-American to anchor a newscast in St. Louis during prime-time while at KMOV. Hunter, who grew up in St. Louis, retired from the profession in 2002.

Vickie Newtown anchored the news on KMOV from 2002-2012. She resigned in 2012 and moved home to Arkansas. She later revealed, on a website she founded, that she was a victim of cyber-stalking and left St. Louis in part because of that.

Newton’s anchor partner during her time at KMOV was Larry Conners. Conners is the former KMOV personality most recently making news himself. Connors was fired in May of last year for comments he made on his Facebook page. Conners later challenged the firing and the non-compete clause that came with it. Former co-worker Hunter criticized Conners in a St. Louis Post-Dispatch column when Conners accused the station of age discrimination. Conners now hosts a nightly radio show on KTRS 550.

KMOV’s television lineup is mostly filled with syndicated programming during the daytime and CBS programming at night. The station airs the popular Great Day Saint Louis during the midday hours. Kent Ehrhardt is the current Chief Meteorologist at KMOV he can be seen weekdays on News 4 This Morning. Claire Kellett and Andre Hepkins anchor the morning broadcast. Steve Savard and Sharon Reed anchor the nightly newscast. Maurice Drummond is the Sports Director at KMOV, a spot he took over last year when Savard went on to anchoring. Savard had held the position since 1994. Savard is also the radio voice of the St. Louis Rams. Doug Vaughn handles various sports reporting duties throughout the week. He has won the Best Sportscaster award at the St. Louis Emmy Awards five times during his tenure in St. Louis. Vaughn can also be heard on the excellent radio show The Morning After on CBS 920 and InsideSTL.com

KMOV recently aired a great special on it’s 60 years serving the St. Louis community. We’ve embedded all three parts below for your enjoyment. The special, including all three parts, will air again this Saturday, July 19 at 4 pm.