If you’re a Shark Tank watcher, you may recognize the name. In April 2013, you watched as a mother-daughter team stood before the sharks with their “Cupcakes in a Jar” idea. They ultimately took a deal with Mr. Wonderful (aka the villain of the show). However, it worked out well for them as they have received rave reviews and have recently expanded the business to offer French Macarons and Cheesecakes in a Jar for 2014. They also have 2 retail stores in Massachusetts. 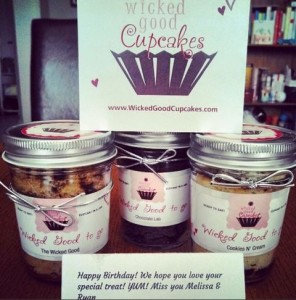 What’s so great about Wicked Good Cupcakes, besides the wicked cool name? Well for starters, it’s cupcakes! That you don’t have to make yourself! They just show up at your door in cute packages ready for you to eat. Now you might be thinking, cupcakes shipped in a jar? There’s no way they’ll taste fresh and be moist. But they are! All of their cupcakes are made from scratch, no packaged mixes, and they don’t use preservatives. Each cake is baked and hand packed into jars the day they are shipped. And you can tell.

I received a customized 4-pack as a birthday present in April. It came with the Chocolate Lab, Natalie’s 24 Karat Cake, Cookies ‘n’ Cream, and The Wicked Good. That’s right, they even have cool names for their cupcakes! One thing about cake and cupcakes that I’m not a big fan of is the heavy, sugar frosting. I like the smooth, whipped icing. And luckily for me, that is the kind of icing Wicked Good offers. It’s thin, light, and tasty. And the cake itself is honestly moist, like it was just baked…by someone who knows how to properly bake a cupcake and not overcook it or add too much sugar or something. And what’s even better is that it’s more cake-like than cupcake-like. By that I mean they add layers of frosting or chocolate cream or caramel or peanut butter so that when you get to the middle and bottom of the cupcake jar, it’s not just plain cake; there’s always something to go with it. And it’s bigger than a regular-sized cupcake too. I couldn’t eat the whole thing in one sitting, which is totally fine because you can just put the lid back on the jar and save the rest for later!

My favorite was the Chocolate Lab. It may be a bit too chocolaty for some, but I just grabbed a glass of milk to go with mine and that made a perfect dessert. If I had anything negative to say about these cupcakes, it would be that they are all pretty rich, so make sure you pair them with a glass of milk or a cup of coffee. It also says on the packaging: “please eat within a week for maximum enjoyment.” Their actual shelf-life is 7-10 days, which means you can’t buy a package in hopes to save some for when you get a cupcake craving. So buying a package of 4 or 6 may be overdoing it if you plan to eat them all yourself.

With Mother’s Day just around the corner (it’s on Sunday for those of you living under a rock), I recommend sending mom some Wicked Good Cupcakes if you have yet to pick something out for her. The packaging is really cute and they have Mother’s Day specials with little flower fondant toppers.

I recommend the Chocolate Lab and the National Velvet Security (which is on my list to purchase).