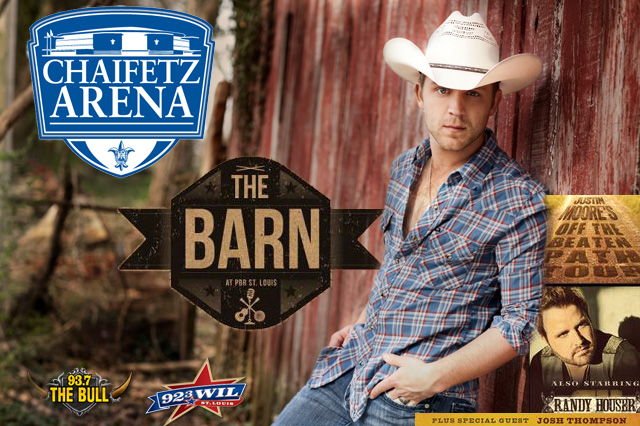 Country artist Justin Moore brings his Off The Beaten Path tour to St. Louis on March 27 at Chaifetz Arena. Randy Houser and special guest Josh Thompson are also on the bill. Tickets range from $27.75 to $42.75 and are still available.

Keep in mind those prices are a tad deceiving considering there is also an $11 fee assessed by Ticketmaster. Looking at the Ticketmaster site, lower seats with a good view of the stage are largely only available as single seats. Seats to the sides of the stage and in the back, higher part of the arena are available for larger groups.

A VIP ticket is also available for $179 plus fees. That gets you one Pit ticket as well as a seat in the first 10 rows, a pre-show acoustic performance by Moore, a “group photo” with the singer, a limited edition poster and an invitation to the pre-show “Backwoods” VIP Party Lounge.

Moore will be having not one but two preview events earlier in the day on that Thursday.

You can enter to win tickets to a “Pre-Show Pre-View” with Moore from 92.3 WIL at The Barn at PBR as well as two tickets to the show at Chaifetz. Word is Moore will be performing a brief acoustic set.

93.7 The Bull is offering a chance to win tickets to a “Pre-Party” at The Biergarten at the Anheuser-Busch Brewery. Moore is likely not performing at this event.

Moore is touring in support of his newest album, Off The Beaten Path. It’s his third studio album. Moore’s self-titled debut album featured hits “How I Got To Be This Way”, “Small Town USA”, “Backwoods” and “Grandpa”. His second album, Outlaws Like Me , featured the hit “If Heaven Wasn’t So Far Away”, which became his second #1 single after “Small Town”.

The Moore song currently getting plenty of country music radioplay is “Lettin’ The Night Roll”.

Randy Houser is opening for Moore on this tour. Country fans originally became familiar with Houser back in 2009 with his hit “Boots On”. In the last two years, his songs “How Country Feels” and “Runnin’ Outta Moonlight” have both been certified platinum. His latest single is “Goodnight Kiss”.

Josh Thompson released his first album back in 2009 and had three songs from the album reach the Top 30 on the country charts. His biggest hit to date was “Way Out Here” from that album. Thompson’s latest single is “Cold Beer With Your Name On It”.

This Weekend in St. Louis Ryan 630 days ago.

This Weekend in St. Louis Ryan 631 days ago.