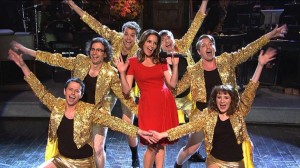 I have long loved Saturday Night Live. The show is now in it’s 39th season! I have loved it since the early years. Yes, it has been around long enough that my parents wouldn’t let me watch the first years because I was too young!

The talk of the most recent episode was the new cast: Beck Bennett, John Milhiser, Kyle Mooney, Mike O’Brien, Noel Wells, and Brooks Wheelan. With a very new cast, you had to open strong with some experience and the amazing Tina Fey was an outstanding choice! I love her timing and sense of irony.

Of course, with an incredible new cast, there had to be some hazing. I do believe that gold lame shorts in the opening monologue were a pretty good start!

While most of the new cast didn’t have have the opportunity to shine past the gold shorts, they each had a part here and there. Noel Wells, the only new female cast member, rocked it playing Lena Dunham in the Girls parody. Kyle Mooney joined the Weekend Update as Bruce Chandling. Mike O’Brien played a used car salesman. Brooks Wheelan joined an e-meth skit and ended up half-naked in Kenan Thompson’s living room. I’m not sure if John Milhiser had a role past the opening monologue, but check him out in this hilarious Step It Up parody called Clap It Up. Beck Bennett, who you may know from the AT&T commercials, had a small role in the Obamacare skit.

SNL skits always make me ponder some serious questions as well. One of them left me asking what do chocolate, sex, and Saturday Night Live have in common? One of my favorite skits had to be the Brownie Husband!

I am really interested to see what kinds of characters these new cast members develop. Are we going to find something iconic that becomes a part of our larger experience like The Blues Brothers, Gumby, The Church Lady, Adam Sandler’s Hanukkah song, Coffee Talk, or Mary Katherine Gallagher? I can’t wait to see the level of creativity that this new group brings!

Who or what’s your favorite SNL cast member, skit, or character? For me, it’s kind of like a Lay’s potato chip-I can’t pick just one!