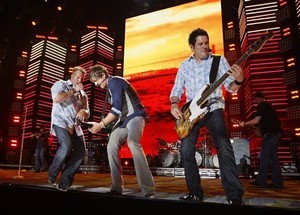 Every Summer, major country music acts grace the stage of the Verizon Wireless Amphitheater just outside of St. Louis. Nine big shows are lined up this season starting with Brad Paisley and company this Thursday, May 9th.

You’ve probably heard of most of these headliners. Check out these videos and fun facts about some of the openers:

Chris Young won Nashville Star, a country music reality show, in 2006. He is by far the most successful winner of the show. Miranda Lambert also got her start on the show, finishing third in the show’s first season.

Gilbert proposed to fellow country singer Jana Kramer on his birthday this year. He rented out the Ryman Auditorium in Nashville for the occasion.

Florida Georgia Line played under the Arch last July. They were the first band of the day and played for a small group of fans before Colt Ford took the stage. The headliner, Dierks Bentley got rained out after a few songs later in the day. FGL shot to stardom a few months later with Cruise. The band recently released a remix of the song with St. Louis’ own Nelly.

Jana Kramer became a successful television actress before setting off on a music career. She played Alex Dupree on One Tree Hill and a six-episode role before that on Friday Night Lights.

The Perry siblings were “discovered” in 2008 by Garth Brooks’ manager, Bob Doyle.

I first heard Dustin Lynch’s “Cowboys and Angels” when my cousin and his new wife danced to it at their wedding.

Miranda’s first single, “Me and Charlie Talking”, was co-written with her father.

Thomas Rhett garnered major radio play for the first time with his hit “Beer With Jesus”. He co-wrote “1994”, a current hit for Jason Aldean.

These videos leave you hungry for more? Check out this playlist I made using Huzzaz, featuring 53 songs from the acts coming to St. Louis this summer.

Get your tickets before they’re gone.