2018 State Farm MVC Men’s Arch Madness Basketball Tournament: The excitement of the Missouri Valley Conference Men’s Basketball Tournament returns to Scottrade Center March 1-4. It’s Evansville vs Uni on March 1st at 6pm and Missouri State vs Valparaiso at 8:30pm, then Loyola vs winner on March 2nd, SIU Salukis vs winner at 6pm, as well as Duke vs Bradley and Illinois State vs Indiana State to kick it off. Then games continue Saturday and Sunday with winners from those tournaments with the championship game on Sunday at 1:05pm.

Fire & Ice: This annual event includes sweeping views of the city, red-hot firepits, specialty themed cocktails, an ice bar and ice luge, fire performers, go-go dancers and other “fiery” and “icy” surprises! Cover begins at 9pm and will be $10. Cover includes a drink ticket for an experience on our ice luge!

Art St. Louis Varsity Art XXII Reception: This is the 22nd annual event, which presents original artworks by 42 undergrad & grad level art students representing 21 regional colleges and universities in Missouri & Illinois. Enjoy a free reception on Friday evening to learn more about the event. Exhibit runs from March 2nd through 29th and is free and open to the public.

Ron White: Comedian Ron “Tater Salad” White first rose to fame as the cigar-smoking, scotch-drinking funnyman from the Blue Collar Comedy Tour phenomenon, but is now a chart-topping Grammy-nominated comedian and a feature film actor. His stories relay tales from his real life, ranging from growing up in a small town in Texas to sharing stories of his daily life to becoming one of the most successful comedians in America. All 4 of his comedy albums charted #1 on the BillboardTM Comedy Charts. He has sold over 14 million albums (solo and with the Blue Collar Comedy Tour), been nominated for two Grammys, and over the past 9 years (since 2004) been one of the top three grossing stand up comedians on tour in America. Tickets start at $46.75

Off White Indie Wedding Show: A wedding show for the hip, non-traditional couple. Unlike the big-box wedding shows you might be used to, Off White focuses on unique & truly personal service. Our approach offers ALL couples the opportunity to connect with amazing wedding pros in an intimate setting. Vendors include: Brea Photography, Aisle Less Traveled, Bridal Parlour, Moonrise Hotel, Onesto Catering, Rudy’s Flower Truck, Stl Party Bus, and tons more.

First Friday: Indiana Jones: Dig into a night of exploration and adventure at our March First Friday! Do real life archaeologists find mounds of treasure and risk their lives in the name of discovery? Dr. Chris Begley, an archaeologist known as “the real-life Indiana Jones,” will answer these and other questions as he recounts his adventures. You will also learn about excavations here in Missouri and how you can work like an archaeologist in your own backyard. There will be food and drink available, you can check out motion simulators, and end the night by seeing Indy in action in Raiders of the Lost Ark, free in the OMNIMAX Theater!

Art in Bloom: The Museum’s annual celebration of flowers and fine art. Dozens of works from the Museum’s collection will be imaginatively interpreted through floral design by the region’s most talented florists. In addition to the floral displays, the festival includes floral presentations and lectures, family activities, dining, and shopping. Admission is free.

10th Annual Robert Class French Film Festival: Co-presented by Cinema St. Louis and the Webster University Film Series — celebrates St. Louis’ Gallic heritage and France’s cinematic legacy. The featured films span the decades from the 1920s through the 1990s, offering a revealing overview of French cinema. This year’s fest kicks off with a screening of Bertrand Tavernier’s acclaimed documentary “My Journey Through French Cinema,” the director’s personal reflections on key films and filmmakers. Several of the works he highlights — such as Jacques Becker’s “Casque d’or” and Jean-Pierre Melville’s “Le Samouraï” — are screened at this year’s fest. Every program features introductions and discussions by film or French scholars and critics. The discussions will place the works in the contexts of both film and French history and provide close analyses. Tickets are $13. Webster students are free. All films are in French with English subtitles. 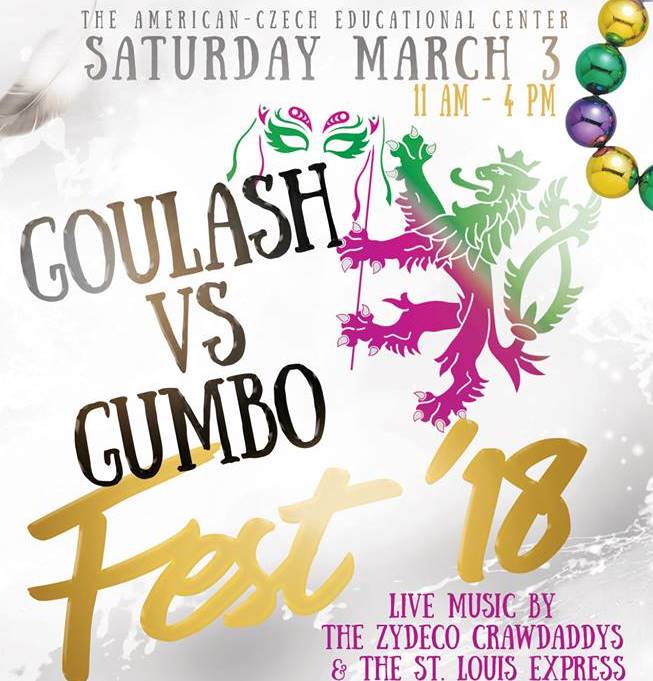 Goulash & Gumbo Festival: A culinary showdown between two cultural favorites, Goulash and Gumbo. Three types of Goulash (Chicken, Beef, and Vegetarian) will be served along with three types of Gumbo (Chicken, Seafood, and Vegetarian). There will also be mini sandwiches for purchase: Muffaletta and Chlebicky. Desserts available will include: Listy, Czech Cookies, Beignets, and Crepes. There will be a variety of Czech Beers and Liquors, as well as specialty cocktails matching the theme of the event and packages including souvenir drinkware. A limited number of shirts, glasses, and souvenirs will be available for purchase. Tickets will also be sold for a chance to win a basket of goodies. Vote for your favorite dish and be entered into a drawing for one of many prizes including glassware, shirts, and tickets to upcoming events! There will be live music from The Zydeco Crawdaddys and the St. Louis Express. Tickets start at $25 for the sampler.

Chicago: There’s never been a better time to experience CHICAGO, Broadway’s razzle-dazzle smash. This triumphant hit musical is the recipient of six Tony Awards®, two Olivier Awards, a Grammy®, thousands of standing ovations and now the #1 longest-running American Musical in Broadway history. CHICAGO has everything that makes Broadway great: a universal tale of fame, fortune and all that jazz; one show-stopping song after another; and the most astonishing dancing you’ve ever seen. It’s no surprise that CHICAGO has wowed audiences from Mexico City to Moscow, from Sao Paulo to South Africa. And now it’s coming to St. Louis!

TobyMac: Toby Mac is bringing his dynamic “HITS DEEP Tour” to St. Charles alongside talent-packed line-up including Danny Gokey, Mandisa, Ryan Stevenson and Finding Favour. The 2018 “HITS DEEP Tour” is a partnership with K-LOVE, Air1, Awakening Events and Food for the Hungry. With more than 11 million units in career sales and a whopping seven GRAMMY® Awards, TobyMac’s career continues on the fast track. His most recent studio album, THIS IS NOT A TEST garnered a GRAMMY® Award, Billboard Music Award nomination and a high marking debut at No. 4 on the Billboard Top 200. Tickets start at $31.