Centennial Beer Festival: The 10th annual festival features tastings from local breweries, a home brewer’s competition, live music, a five-course dinner, and more. The Brewmaster Five Course Dinner featuring Cathedral Square marks the 9th year we have hosted a local brewery to kick-off the Centennial Beer Festival. This event takes place Thursday night. Tickets are $65. Friday night’s musical entertainment is Stan Deuce Denniger and there will be a home brewer’s competition. Tickets are $40. Saturday will have 2 tastings and live music will include: BrotherSister and Matthew Diekemper. Tickets are $43.

Fish Fry Festival: Broadway Oyster Bar, the most delicious cajun and seafood restaurant in St. Louis, is hosting another one of their awesome food festivals, this month is the fish fry festival. Enjoy a delicious variety of fish that you won’t find on the regular menu, including: Seafood bisque, Salmon cakes, fish & chips, grouper tacos, cod sandwich, crab encrusted red snapper, crawfish stuffed swordfish, and more. Their regular menu will still be available as well. Also, enjoy live music from Mom’s Kitchen on Friday and All Roostered Up and Funky Butt Brass band on Saturday.

Hot Country Nights: The annual country music series event at BPV continues this Friday with newcomer, Brett Young. Don’t miss hearing hit songs “In Case You Didn’t Know,” “Sleep Without You,” and more. Tickets are $20 in advance or $30 day of.

St. Louis Blues: The Blues take on the Winnipeg Jets at home on Friday night before heading out to Nashville on Sunday to take on the Predators. Tickets for the game start at $40.

Washington’s 1858 Birthday Ball: On Saturday, February 24, the National Park Service honors George Washington and his significance in American history with an authentic birthday celebration. Washington’s Birthday Ball includes live, 19th-century music and a historical dance workshop. This event is free and open to all ages, and will take place in the Old Courthouse Rotunda. Historical dress is not required to participate.

Blake Shelton Country Music Freaks Tour: Country music star and The Voice judge (with the most wins), Blake Shelton, is coming to St. Louis on his Country Music Freaks Tour promoting his latest album, Texoma Shore. His openers are Brett Eldredge and Carly Pearce and there will be a very special guest appearance from Trace Adkins! Blake’s hits include: “Austin,” “‘Ol Red,” “The More I Drink,” “Honey Bee,” “Drink On It,” “Boys ‘Round Here,” “Mine Would Be You,” and many more. 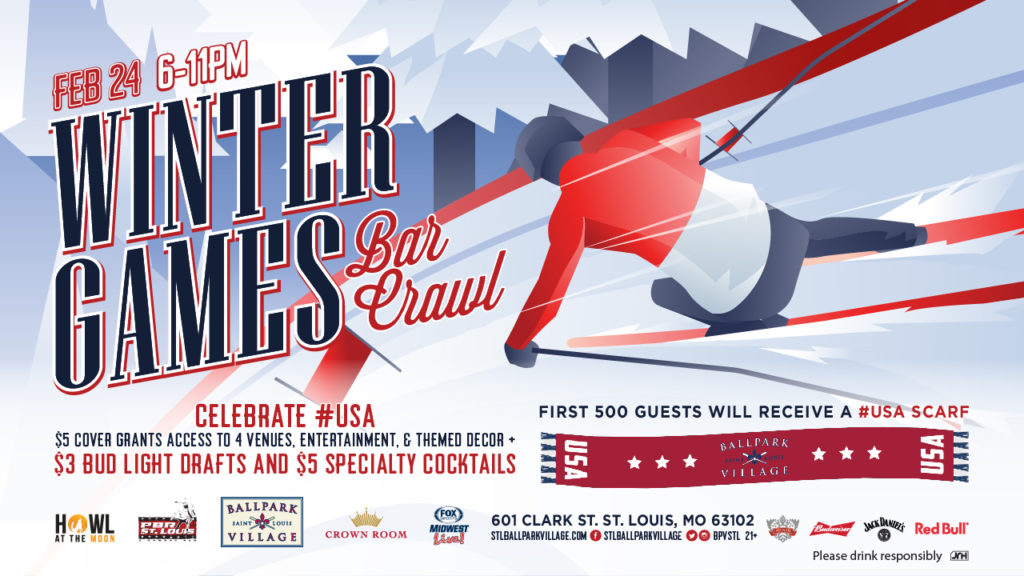 Winter Games Bar Crawl: Let the games begin! Join Ballpark Village on Saturday, February 24th from 6-11pm as we celebrate USA with our Winter Games Bar Crawl. Enjoy $3 Bud Light Draft and $5 specialty themed cocktails at Howl at The Moon, PBR St. Louis, Fox Sports Midwest Live! Skybox and The Crown Room. A $5 cover charge grants each guest drink specials and guaranteed entrance to all four venues all night long. Plus, be one of the first 500 guests to arrive and receive a free Ballpark Village branded USA scarf! So break out your best red, white and blue apparel for our Winter Games.

Walk The Moon: The alt-rock-pop quartet were catapulted into the spotlight with their 2014 hit “Shut Up and Dance” which became a multi-platinum global smash, crossing sonic barriers to top three different Billboard charts. After two years of performing countless sold out shows in twenty five countries across five continents, the band returned to the studio to craft their third major label release, 2017’s What If Nothing. The new album shows the band simultaneously at their most epic and their must vulnerable, a daring step forward both musically and lyrically.

The Wizard of Oz: There truly is no place like home as the greatest family musical of all time, the wonderful WIZARD OF OZ, twists its way into St. Louis! The entire family will be captivated as they travel down the Yellow Brick Road and beyond with Dorothy, Toto and their friends the Cowardly Lion, Tin Man and Scarecrow in this lavish production, featuring breathtaking special effects, dazzling choreography and classic songs. A spectacular celebration of the iconic 1939 MGM film, THE WIZARD OF OZ will blow you away from the moment the tornado touches down and transports you to a dazzling Oz, complete with munchkins and flying monkeys. Don’t miss the chance to travel Over the Rainbow and experience this national treasure on stage.

SLAM Underground: Bollywood: DANCE to the Desi beats of Dj Blaze, QUENCH your thirst with a Bollywood Fizz, our signature cocktail, CRAFT a toran (door decoration) in the Create Lab, SNAP a picture in the Bollywood-themed Selfie Station (created by the Center for Indian Cultural Education-Bal Vihar of St. Louis), RELAX and refresh with a guided yoga and meditation session, TRY on and learn about saris with Bal Vihar, SPIN the Prize Wheel and test your knowledge of famous people, places, & things from India, SEARCH for mudras and vahana in the Museum collection on a scavenger hunt, WATCH a calligraphy demonstration led by Bal Vihar, ADMIRE a performance by Dances of India. Free admission.

Celebration Day: A Tribute to Led Zeppelin: Led Zeppelin Tribute based out of St Louis that features members of local bands that were formerly signed to major labels, and are all local legends in their own way…this tribute features members of El Monstero, Joe Dirt, Dr Zhivegas, The Incurables, The Urge, and the Feed. Spearheaded by drummer John Pessoni, the music mainly focuses on the live aspect of Zeppelin’s shows so chances are if you’ve seen past footage of the band playing it, you’ll probably hear it during the nearly 3 hour show. Tickets are $25.

Big Eyes, Big Minds International Children’s Film Festival: A festival showcasing the best films from around the world to educate, enrich and inspire kids ages 1 to 16 years old. All programs feature age-appropriate live-action and animated short films which are universally relevant to kids. The mission of the film festival is to expose children to diverse and imaginative works to broaden their view of the world, foster critical thinking and inspire creative expression. After each screening, staff from the zoo and Endangered Wolf Center will offer a range of crafts and activities related to animals in the films. Screenings are $8/zoo member or $9. 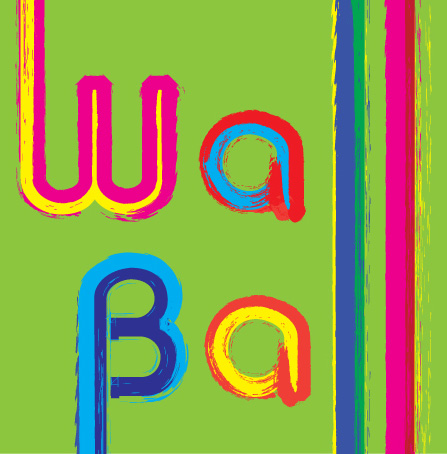 Wall Ball: An annual art sensation, Wall Ball is an opportunity for art enthusiasts, patrons and supporters to see artwork created live by some of St. Louis’ finest artists and bid on/purchase their work! Among the many painters and mixed media artists, our very own artists will be on-hand to create glass art live! Laura Simone will be creating one-of-a-kind jewelry on the flameworking torch, and we will also host a glassblowing demonstration! The festivities take place Saturday, February 24, at 7:00p, with the live art auction closing at 10:45pm. Wall Ball is the biggest contributor to Artscope’s operating budget, so that it may continue offering creative programs for St. Louis children at its unique location inside Tower Grove Park. GA tickets are $40.

Broadway Live: Join us for an incredible evening of Broadway, without having to even get on an airplane. Broadway Live! brings all of your favorite Broadway songs to you, direct from New York City, for a performance you’ll never forget. A roster of acclaimed Broadway performers will come together to perform your favorite songs from Guys & Dolls, The Sound of Music, West Side Story, A Chorus Line, Fiddler on the Roof, Wicked, Les Miserables, The Phantom of the Opera, and much more! This evening of entertainment will feature performances by Marissa McGowan, Carla Stickler, Charlotte Maltby, Bart Shatto, Roosevelt Andre, and Paul Schoeffler.

Working Women’s Survival Show: Now in its 31st year, this show is a weekend of food, fashion, fitness, and fun unlike any other. It is the Ultimate Girl’s Day Out. Instead of making separate trips to the mall, restaurant, salon, and spas, women can go shopping, grab a bite, and get pampered all in one place with their family and friends. Enjoy guest appearance from co-host of Dancing With The Stars, Samantha Harris, a JJill Wearever Collection Fashion Show, spin the Movies of Marilyn Wheel for special prizes, Menopause The Musical cast performs, AshleyLiane Dance Company performs, Dilliards Fashion Show, Musical guest Kamber Cain, exercise classes and demos, a cooking stage with demos from celebrity chefs including Chef Casey Shiller, Chef Mrtiz Lopez, and more, a mixology stage with yummy drink demos, and more!