27th Annual Burns’ Night Celebration: Haggis, cock-a-leekie soup, neeps & tatties, shephard’s pie, scotch eggs, and sticky toffee pudding will all be available for sale upstairs in the North Bar starting at 5pm. Starting at 6pm, the PARADE OF PIPERS and Haggis begins and Tom Schlafly addresses the masses with his annual poem conjuring the spirit of Robert Burns. DUDDY BREEKS play live starting at 7pm. Delicious Scotch Ale will be flowing on draft all night long. Don’t forget to wear your kilt! The event is free and open to the public.

Hot Country Nights: The 3rd week of this annual country music series features Scotty McCreery. McCreery won the 10th season of American Idol in 2011 and has had some great hits including: “See You Tonight”, “Feelin’ It”, and “Five More Minutes.” Featuring special guest, Danielle Bradberry, who won Season 4 of The Voice, as the opening act! Tickets are $20 in advance/$30 day of.

Shen Yun: Take an enlightening journey through 5,000 years. SHEN YUN’S unique artistic vision expands theatrical experience into a multi-dimensional, inspiring journey through one of humanity’s greatest treasures—the ﬁve millennia of traditional Chinese culture. This epic production immerses you in stories reaching back to the most distant past. You’ll explore realms even beyond our visible world. Featuring one of the world’s oldest art forms— classical Chinese dance—along with patented scenographical eﬀects and all-original orchestral works, Shen Yun opens a portal to a civilization of enchanting beauty and enlightening wisdom. Traditional Chinese culture, with its profoundly optimistic worldview and deep spiritual roots, was displaced by communism in China. Today, only the New York–based Shen Yun is keeping this precious heritage alive on stage. And it’s an experience that will take your breath away.

Mardi Gras Wine Beer & Whiskey Taste: Take a tour of the world through each sample of more than 50 types of whiskey, wine, craft beer and refreshing lagers curated both internationally and locally, all included with your pass. We will also be offering a lineup of award-winning BBQ from local celebrity pitmasters in addition to a packed dance floor full of people getting down to the sounds of DJ Quain of Rockstar DJs. Admission: $45 in Advance, $50 at the Door

St. Louis Mardi Gras Cajun Cook-off: Learn the secrets of Cajun cooking from the best chefs in St. Louis, Mike Johnson and Christina Fitzgerald, whose culinary roots are connected to New Orleans, then taste the subject matter of the most delicious lesson you’ll ever learn as they hand out samples. These cooking demos of authentic creole cuisine will be taking place all day long as highly talented amateur chefs from across the area face off, preparing their best dishes to be sampled by a panel of hungry and highly discerning judges. Admission to the event includes an authentic Cajun lunch, prepared by the flavor wizards at Sugarfire Smokehouse, and all the beverages you need to wash it down, not to mention boot-stomping tunes straight out of the Big Easy. Admission: $40 in Advance, $45 at the Door

9th Annual Boutique Bridal Event: Please join us for the 9th Annual Busch Stadium Bridal Event. Your ticket includes: a guided tour of Busch Stadium’s unique and versatile event spaces set and decorated for rehearsal dinners and weddings, an opportunity to visit with unique wedding vendors from across Cardinals Nation including photographers, wedding planners, florists, bakeries and DJs, and cocktail and hors d’oeuvres samples from our exclusive caterer Delaware North Sportservice and Executive Chef Larry Johnson. Each bride will receive a special goodie bag including a copy of the Spring/Summer St. Louis Bride Magazine, a voucher good for two tickets to a 2018 Cardinals game and other great information to help them prepare for their wedding day. Tickets are $12.00 in advance and $14.00 at the door.

School of Rock: The Musical: Based on the hit film, this hilarious new musical follows Dewey Finn, a wannabe rock star posing as a substitute teacher who turns a class of straight-A students into a guitar-shredding, bass-slapping, mind-blowing rock band. This high-octane smash features 14 new songs from Andrew Lloyd Webber, all the original songs from the movie and musical theater’s first-ever kids rock band playing their instruments live on stage.

The Marvelous Wonderettes: The pop doesn’t stop in this smash hit musical! A high school prom in 1958 and a 10-year reunion in 1968 provide the backdrop for some of the biggest hits of both decades, performed by an irrepressible quartet of young women. Featuring a stacked playlist that includes “Mr. Sandman,” “It’s in His Kiss,” “Respect,” “Son of a Preacher Man” and “Lollipop,” it’s a joyous snapshot of a musical era.

Chase Rice: w/ Travis Denning. Country music singer-songwriter is promoting his latest album, Lambs & Lions, released November 2017. His first album, Ignite the Night, featuring the Platinum-certified single, “Ready Set Roll” was released in 2014 and debuted at #1 on Billboard Top Country Albums. Other hits include: Gold-certified “Gonna Wanna Tonight,” “Everybody We Know Does,” and “Three Chords & The Truth.” Rice has toured the world with four massive headlining tours and stadium-show opening runs for country megastars including Kenny Chesney and Dierks Bentley.

Tiffany Haddish: She Ready Tour: Tiffany Haddish is quickly establishing herself as one of the most sought-after comedic talents in television and film. Haddish was most recently seen starring in Universal’s Girls Trip alongside Jada Pinkett Smith, Queen Latifah and Regina Hall. Her book, The Last Black Unicorn, published December 2017, is a New York Times Best Seller. In August she debuted her comedy special for Showtime titled Tiffany Haddish: SHE READY! From the Hood to Hollywood and she will next be seen starring alongside Tracy Morgan in the new TBS show, The Last O.G. Haddish sees herself as sexy as Halle Berry, as funny as Jim Carrey, raw like Richard Pryor with the comedic timing of Lucille Ball, smooth like Eddie Murphy, Jewish as Whoopi Goldberg, and hopes to someday have money like Oprah.

Fete de Glace: Ice festival and ice craving competition that is is fun for the whole family. Ice carvers fill two blocks of North Main Street. You can watch carvers bring the ephemeral art of ice carving to life with chainsaws, chisels, grinders and knives, as well as hot irons and cold spray. Each carver starts with a single block of ice weighing 260 lbs. and dissects it and reassembles it into wondrous sparkling creations. There are outdoor fire pits, restaurants serving breakfast or lunch and shops to wander in to help you stay warm. Plan to stay for a few hours so you can watch the sculptures develop from a block of ice. 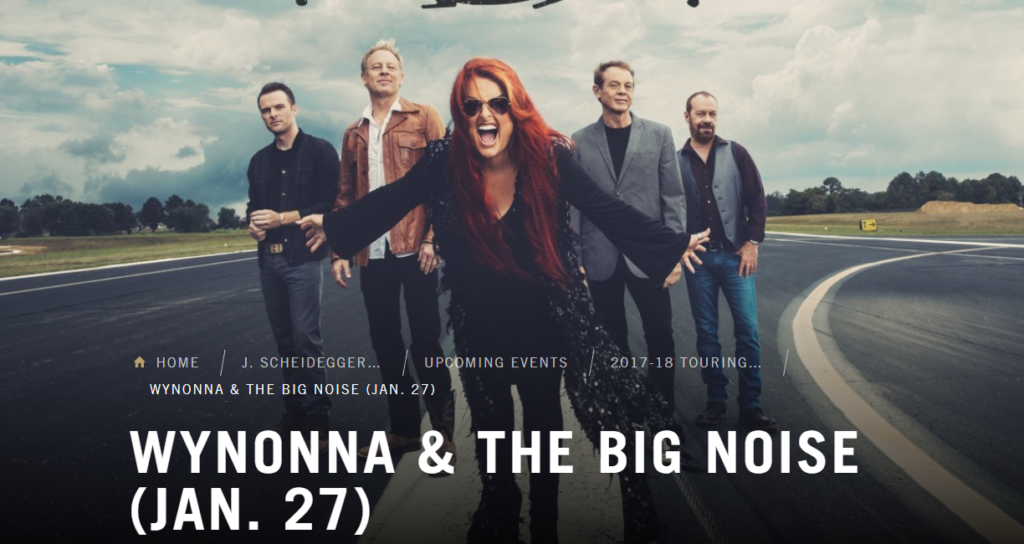 Wynonna & The Big Noise: Respected by the millions of fans who are drawn to her music and undeniable talent, Wynonna’s rich and commanding voice has sold over 30-million albums worldwide spanning her remarkable 33-year career. This iconic performer has received over 60 industry awards, with countless charting singles, including 20 No.1 hits such as “Mama He’s Crazy,” “Why Not me,” and “Grandpa, (Tell Me ‘Bout The Good Ole Days).” Wynonna and her band The Big Noise, led by her husband/drummer/producer, Cactus Moser, released their debut full-length album in February 2016 via Curb Records to critical acclaim. Wynonna has described the new sound as “vintage yet modern” and a “return to the well.” It’s a rootsy work encompassing country, Americana, blues, soul and rock. Tickets start at $39.50.

Motorcycles On Ice—Xtreme International Ice Racing: Man and machine going from 0-60mph in under 3 seconds! Speedway bikes and quads are modified and compete on an indoor ice arena. There are over 2000 metal studs added to the tires and there are NO BRAKES! What does that mean…? PURE ADRENALINE! It is THE fastest sport on ice and one of the fastest sports in the world. The rush of so much power and speed on something as unpredictable as ice, has whipped audiences into a frenzy and gained new fans across the country. There will be a total of twenty to twenty-five races. Tickets are $5-$25.