Fuller House Gets Renewed For  Fourth Season By Netflix, New Episodes Coming In 2018

Fuller House, the Full House reboot on Netflix, has been renewed for a fourth season.  New episodes of the hit show will premiere on the streaming network sometime in 2018. W

What can we expect? Maybe not any of these predictions, but we can dream, right?

The fourth season of the show will consist of 13 episodes. A release date has not been announced, but is speculated to be sometime in 2018. A start date for the filming of new episodes has not been set yet either, however here’s where you can go for tickets to a live taping of Fuller House when dates are announced.

Fuller House has been a fan favorite for Netflix through its first three season. Before the second part of season 3 dropped, the company announced that the show was one of its top 2 streamed original shows along with Gilmore Girls: A Year In The Life.

Scroll down at your own risk because there are spoilers after the jump. If you haven’t seen all of the episodes of the series yet, go binge on them and click back here.

I’m not in a place to predict what will actually happen in season 4 of Fuller House, but read what I hope happens below. I’ll also give you a reminder on where the lovable characters stand heading into season four.

Franklin talked to TVLine about what that means for the show.

“It got to be really repetitive for me every time the dads or Becky would show up. We’ve had to bring them in with suitcases and reasons for them being there and it got to be the same thing over and over. I’m looking forward to them just being in town and whenever the storyline works, they can just be part of the gang again without making a big deal out of it. It’s going to feel much more normal to have them back in town. It depends on how many episodes their schedule allows and how much Netflix orders. But hopefully we’ll see more of them, not less.”

The end of season three also finds D.J. (Candace Cameron Bure) and Steve (Scott Weinger) poised to get back together again when Steve gets offered a job as the “foot doctor” for the Los Angeles Lakers.

What I Hope Happens In Season 4 Of Fuller House

Twins Mary-Kate and Ashley Olsen portrayed Michelle Tanner on Full House. They were just nine years old when the original show ended and thus appear to have not formed much of a bond with the rest of the cast. I don’t know that for sure, but they have been turning down offers to appear on the reboot since 2014 and everyone has pretty much given up inviting them.

But we can always dream, right? 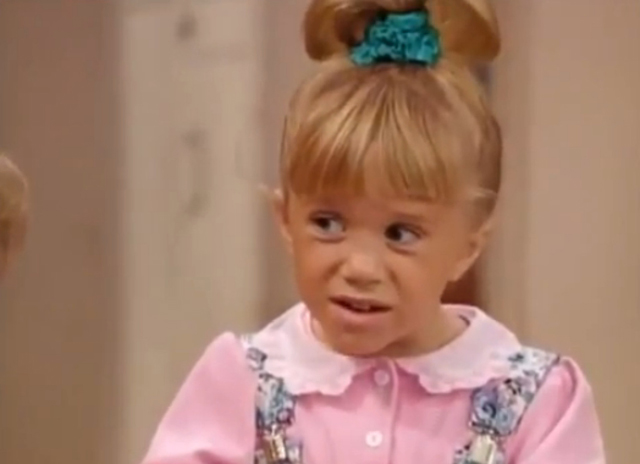 Actually, let’s be honest. We should hope this doesn’t happen in season 4 or maybe ever. Despite using their fame — and fashion experience — from the show to build a billion-dollar empire, the Olsen twins seem somewhat resentful of the show.

Mary-Kate and Ashley Olsen recently launched a new line within their fashion and fragrance empire and Mary-Kate seems perfectly happy living the life of a stepmother in a $13.5-million New York City townhouse with husband Olivier Sarkosy and his two kids. She’s seemingly a far cry away from being the first person a masseuse called when she found Heath Ledger dead.  When asked to appear on Fuller she reportedly said she had a scheduling conflict.

It would take a huge mindset change for the twins, Ashley reportedly just flat-out turned down the Fuller request,  to decide to appear on the show, Without them being fuller committed, their appearance would just be awkward for everyone involved.

Steve Urkel Comes By To Hang Out With Stephanie Again

Jaleel White’s Steve Urkel character from Family Matters showed up  on a Full House episode in 1991 as the cousin of D.J.’s friend. Uncle Jesse tries to teach him how to walk like a normal person and Stephanie gets some tips about wearing her new glasses.

This might be more than a pipedream, however. D.J. makes an Urkel reference in the third season finale of Fuller House and actor Jaleel White is good friends with Full House creator Jeff Franklin.

In an episode during season two, D.J., Kimmy and Stephanie go to a New Kids On The Block show and end up dancing on stage. Andrea Barber and Candace Cameron Bure are real-life fans of NKOTB so, the episode was incredibly fun for them.

The Beach Boys appeared in a 1988 episode of Full House and John Stamos has appeared on-stage with the band multiple times through the years. Unfortunately, this one likely won’t happen for a variety of reasons.

Now that Jesse and Joey own The Smash Club, maybe Mike Love can come back to perform with The Rippers?

I love the cheesiness of the reboot and the dancing sequences have to be the cheesiest scenes of all. Let us all hope for more dancing in season four of Fuller House.

Briana Evigan, Alyson Stoner And Adam Sevani Show Up In Some Sort of A Step Up Episode

Kimmy’s daughter, Ramona ( Soni Nicole Bringas), is an aspiring dancer. How awesome would it be if Briana Evigan, Alyson Stoner and Adam Sevani showed up to show her some Step Up moves?

Alsyon and Adam show up and that leads to Ramona and D.J.’s son Jackson (Michael Campion) recreating this scene from the third installment of the dance movie franchise.

Rocki (Landry Bender) counters with inserting herself into this classic scene from Step Up 2: The Streets.

Lonzo Ball showed up in the season three finale to help convince Steve to take the job with the Lakers in Los Angeles. Clearly, this means that LaVar Ball –Lonzo’s dad– should make a cameo in season four. I foresee an interaction between LaVar and Max (Elias Harger), D.J.’s middle son, that would be hilarious.

Keep LaMelo Ball far away from the wholesomeness of Fuller House.

Danielle Fishel appeared in two episodes of Full House in the early 90s before becoming known as Topanga on Boy Meets World. Girl Meets World saw Fishel and Ben Savage reprising their roles as Topanga and Cory raising a child of their own. That show was recently canceled by Disney Channel after three seasons and fans launched a #GirlsMeetsNetflix online campaign to save the show.

Maybe Riley Matthews and Jackson Fuller have a brief love connection and Rocki gets jealous?

The arc could lead in to Netflix announcing its own Boy Meets World/Girl Meets World reboot.