Saint Louis FC Gets Back In Action This Saturday In Charleston, South Carolina Against The Battery

After an unexpected week off last weekend, Saint Louis FC is back in action this weekend in South Carolina. The local United Soccer League club will take on the Charleston Battery this Saturday in Charleston, South Carolina.

Kickoff is set for 6 PM locally and the match will be streamed live on YouTube.

Charleston comes in to Saturday’s contest leading the USL’s Eastern Conference with a 5-1-1 record and 16 points. The club’s goal differential of +9 is tops in the conference and third overall in the league.

Saint Louis sits in sixth place in the East with a 3-2-2 record for 11 points and a goal differential of -2.

Romario Williams leads the Battery with six goals in six appearances this season. Williams, on loan from Atlanta United FC of Major League Soccer, scored three of those six in a game last month against the Rochester Rhinos. The 22-year old Jamaican was selected in the 2015 MLS SuperDraft by Montreal and was dealt to Atlanta back in December.

Williams, named after the famous Brazilian, had 10 goals in 27 appearances for Charleston last season.

24-year old Justin Portillo anchors the midfield for Charleston. He also leads the club with four assists on the season.

Ataulla Guerra is another Charleston midfielder to watch. He has three goals on the season playing as more of an attacking midfielder in coach Mike Anhaeuser’s (that is not Anheuser misspelled) formation. He was named to the USL Team of the Week last week after scoring to give Charleston the win in a game Williams missed due to illness.

STLFC will need to contain Portillo and Guerra in the midfield on Saturday and keep bodies on Williams. 14 of Charleston’s 16 goals this season have been scored inside the penalty box. Failing to closely mark Williams could bring shades of Cincinnati and Djiby Fall.

The crowd in Charleston on Saturday will likely be a little bigger than the home crowds in St. Louis. The Battery have averaged 3,295 fans per match through five home dates. In three home dates thus far for STLFC, 4,827 fans have turned out per match on average.

Saturday is Geodesicx Military Night at MUSC Health Stadium. All active-duty military members, veterans, and their families receive free entry into the match. The first 500 fans will receive a camouflage Battery shirts. The Battery players will be wearing special camouflage jerseys that they will auction off to fans after the match with proceeds going to a military charity.

Ticket prices in Charleston range from a Supporters’ section ticket for $15 to $185 for a VIP ticket that includes food and drinks, a scarf and field access.

If you tune into Saturday’s match you are bound to notice their massive video board. The screen measures 3,000 square feet in the stadium with a capacity of 5,100.

The unexpected week of has hopefully allowed many of the injuries on the home team’s roster to heal. Reports on the podcast of record earlier this week said many of the players thought to be suffering from injuries actively participating in training sessions recently.

Dragan Stojkov should be healthy for Saturday’s game. The speedy Macedonian will give Preki’s midfield a much-needed boost.

Also, expect Erick Cabalceta and Tony Walls to factor more into Saturday’s game plan. An injury has limited Cabalceta to just 91 minutes on the pitch this season in two appearances. Walls appeared in the club’s April 22 on the same day his signing was announced. He then played the full 90 minutes against Orlando City B.

Christian Volesky and Jose Angulo lead the club with three goals apeice. Only Volesky, Mats Bjurman and Wesley Charpie have appeared in every game for Saint Louis FC this season.

Every USL matched is streamed live on YouTube. Watch the stream below at 6 PM on Saturday May 13. The local “ketchup on steak” supporters’ group is hosting a watch party for the match at International Tap House in Soulard. 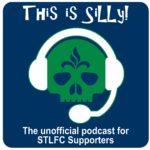 Need to get in the mood for Saturday’s match? Check out the latest edition of the This Is Silly! podcast from the St. Louligans. The characters that serve as the podcast’s hosts were joined by Saint Louis FC president Pat Barry.