USL Sides Saint Louis And Swope Park Will Play A Preseason Match This Saturday At Columbia College In Columbia, Missouri

The two Missouri entries in the United Soccer League, the second tier of professional soccer in the United States, are hard at work prepping for the start of the 2017 season. Those clubs, Saint Louis FC from the eastern side of the state and the Swope Park Rangers from the western side, will play a preseason match this Saturday in the middle of the state. Kickoff for the match is at 1pm Saturday at R. Marvin Owens Field on the Columbia College campus.

Admission to the match is free. 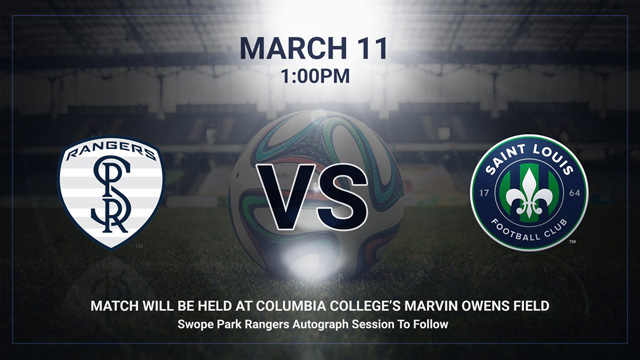 Saint Louis FC is set to being its third season in the USL with a distinctly different look. After missing the playoffs in the club’s first two years of existence, Predrag Radosavljević was brought in to lead the club. Better known as “Preki”, the coach previously won a USL Championship as the coach of the Sacramento Republic. He also has coached in Major League Soccer with Chivas USA and Toronto FC. As a player, Preki is the only two-time winner of the MLS MVP award. He also played for the United States in the 1998 World Cup and played two seasons in St. Louis for the St. Louis Storm of the Major Indoor Soccer League.

In addition to the coaching change, the Saint Louis roster has also been overhauled. Only AJ Cochran, Seth Rudolph, Chad Bond and Tyler David remain from last season’s squad. Among the additions are Southern Illinois University-Edwardsville products Austin Ledbetter and Christian Volesky.

Also gone from last season’s team is Irvin Herrera. The striker from El Salvador and his 14 goals were loaned to the New York Cosmos of the North American Soccer League for the 2017 season with an option for the 2018 season.

STLFC has added Clifton, New Jersey native Jose Angulo to fill the void left by the loan. Angulo was named the 2015 USL MVP and won the Golden Boot as the league’s leading scorer.

A New Look For Swope Park

The Swope Park Rangers are the USL affiliate of MLS side Sporting Kansas City. They too have a new face leading the club this season. Nikola Popovic takes over for Marc Dos Santos, who left Swope Park at the end of last season to coach the NASL expansion side in San Francisco.

Also new to their roster, but familiar to Saint Louis fans, are Parker Maher and James Musa. The players have made the move across the state for the 2017 USL season.

Both Saint Louis FC and the Swope Park Rangers will open the 2017 USL regular season on Saturday, March 25. Saint Louis will be on the road against Louisville City FC while Swope Park will be at home against Oklahoma City Energy FC.

Saint Louis FC will play its first home match of the season on April 1 at World Wide Technology Soccer Park against the Ottaw Fury.

This Weekend in St. Louis Ryan 611 days ago.

This Weekend in St. Louis Ryan 611 days ago.